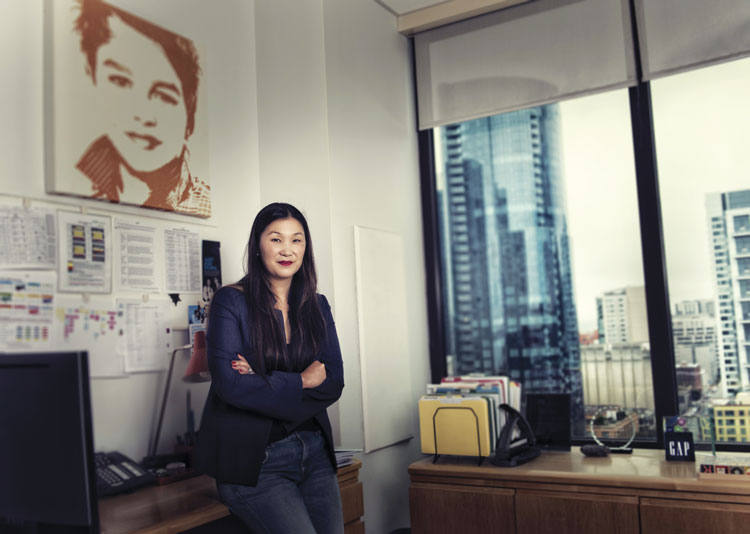 The Gap Inc. makes its outside counsels submit annual diversity surveys, and the numbers haven’t improved much over the years, says Marie Ma, a senior counsel with the San Francisco-headquartered company.

“That’s not a surprise to anybody,” Ma says. Her employer is one of 55 companies that recently supported the Diversity Lab project, in which participating law firms will agree to abide by the so-called Mansfield rule when making decisions on leadership opportunities within the firm.

The Mansfield rule was inspired by the National Football League’s Rooney rule—named after the late Pittsburgh Steelers owner Dan Rooney—which requires that at least one person of color be interviewed for head coach jobs. Arabella Mansfield was the first woman admitted to practice law in the United States, so the rule mandates that at least 30 percent of a firm’s candidates for leadership positions (defined as firm governance roles, equity partnerships, practice chair positions and seats on compensation committees) be women, attorneys of color or both.

According to a June press release, 44 major law firms will utilize the Mansfield rule, including two of the world’s largest firms by lawyer head count: Dentons and DLA Piper. Law firms that implement the rule over the next year will be “Mansfield certified” and can participate in a 2018 client forum, which will pair in-house lawyers with attorneys who are women or people of color for business development opportunities.

A group of partners from Am Law 200 law firms and a Stanford Law School student came up with the Mansfield rule idea at the 2016 Women in Law Hackathon. Besides the Diversity Lab, the hackathon was done in conjunction with the law school and Bloomberg Law. The original pitch only addressed women, and it only called for one woman to be considered for leadership choices.

According to Mark Helm, a Munger, Tolles & Olson partner who was part of the team that came up with the idea for the rule, it was modified to get more buy-in from law firms. If candidate pools have more women and people of color, he says, it might be easier to convince some decision-makers that the individuals could do the job in question.

“My firm has done relatively well with diversity, but at the same time I think it’s relative to other law firms,” he adds. “We all feel that the profession as a whole—including our firm—has a lot more to do.”

Indeed, in 2016 only 18.1 percent of equity partners were women, and 5.8 percent were racial or ethnic minorities, according to the National Association for Law Placement.

Rather than focus on current data about how many women and people of color are in leadership positions at law firms, the goal of the Mansfield rule project is to encourage the firms to be more mindful about their candidate pools, pipeline and succession planning, says Caren Ulrich Stacy, the Diversity Lab’s CEO. In a hackathon press release, the group is described as being focused on “innovative ways to close the gender gap and boost diversity in law firms and legal departments by leveraging data, behavioral science and design thinking.”

“In-house legal departments have been gently nudging law firms to increase their diversity for decades,” she adds. “This is a way for the legal departments to say: ‘We’re not just wagging a finger at you; we’re supporting you being mindful, innovative and thoughtful about how you approach diversity and what you do to get it.’ ”

Stacy, who previously did recruitment and training for Arnold & Porter and Weil, Gotshal & Manges, acknowledges that some law firms say they’d like more diverse leadership but blame the fact that they haven’t established that on “a pipeline issue.”

“In reality, there are plenty of qualified diverse lawyers—specifically women—in the pipeline, at least initially,” she says. “But due to lack of access to work opportunities and sponsorship, unconscious bias in talent management practices, such as interviews and performance reviews and the pay gap, many of these qualified diverse lawyers leave law firms before reaching leadership positions.”

Law firms participating in a project focused on increasing diversity is not new, says professor Joan Williams of the University of California’s Hastings College of the Law in San Francisco, who also serves as director of its Center for WorkLife Law. But so far, she adds, few have had much success.

“Is this a surefire guarantee of progress? Of course not,” she says when asked about the Diversity Lab project. “But one thing is for darned sure: The standard tools haven’t worked, so we might as well try new ones.”

This article appeared in the October 2017 issue of the ABA Journal with the headline “Mandating Diversity: Law firms borrow from the NFL to address the makeup of their leadership ranks"