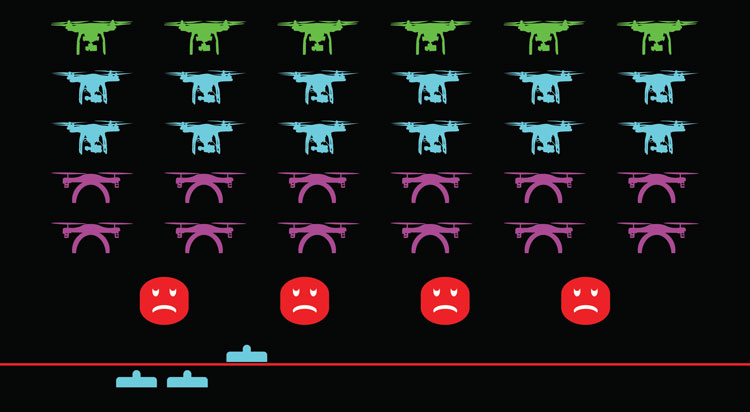 A report comes in of a man at a local taco stand waving a dark object, maybe a gun. From a control room, pilot Matt Hardesty dispatches a sleek black drone from the rooftop of the Chula Vista Police Department in Southern California. One minute and 24 seconds later, it’s above Roberto’s on Broadway.

The taco stand casts a long shadow over a man with buzzed hair. He’s wearing a tucked-in purple polo over a white long-sleeved T-shirt and talking to himself. Hardesty, watching on a monitor, can’t tell if the man is wielding a replica firearm or a real one. “I’m voting on the side of it being a gun,” Hardesty recalls.

A unit of six officers is two blocks away. Video from the scene is transmitted to their smartphones. The officers know the next moments are critical. Similar situations involving fake guns have ended in tragedy.

Hardesty rolls his hand over a trackball mouse, the drone giving him an overhead view as the man is joined by a friend, lifts the object and lights a cigarette. Smoke drifts from his mouth. Hardesty’s relief is palpable. He tells the officers the man probably has a novelty lighter.

Police say unmanned aerial systems can build trust in the community by deescalating incidents such as the one in Chula Vista. Critics warn, however, that drones sow fear and distrust.

“As drones become smaller and quieter and more sophisticated, we are entering a world where there’s no technological limit on the government having cameras everywhere looking down at us,” says Adam Schwartz, a senior staff attorney with the digital rights group Electronic Frontier Foundation.

Public safety agencies across all 50 states have drones, the Center for the Study of the Drone at Bard College says in a March 2020 paper, with 70% of disclosed public safety agencies working with drones in law enforcement. A patchwork of state regulations governs their use, and the law is lagging behind. Congress and the Federal Aviation Administration, which regulates drone safety, have not set guidelines on the concerns around speech, privacy and discrimination.

Experts predict a police drone case eventually will reach the U.S. Supreme Court, though none was aware of any such cases currently pending at the federal level. 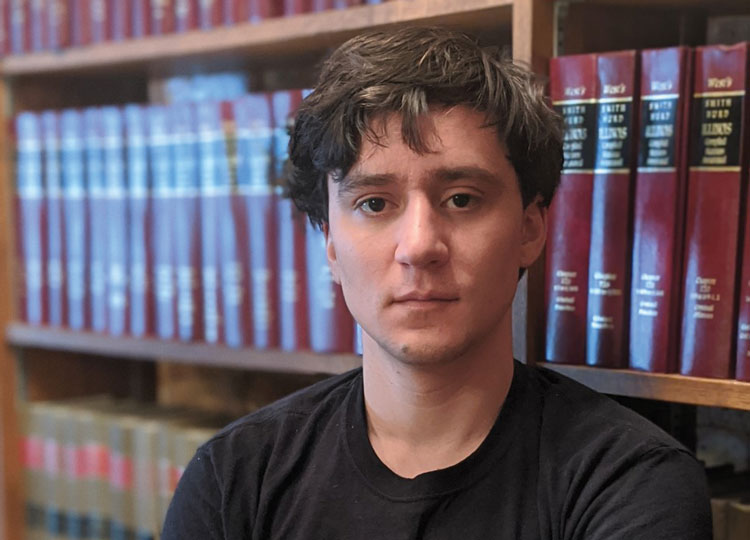 Two cases from the 1980s could be instructive. In California v. Ciraolo and Florida v. Riley, the Supreme Court found warrantless surveillance by the police from an airplane and a helicopter did not violate the Fourth Amendment right to be free from unreasonable searches and seizures.

Recent decisions on GPS locators, thermal scanners and smartphones could come into play. In 2018, the Supreme Court reached one of the most significant privacy rulings in the digital era, finding in Carpenter v. United States that without a warrant, law enforcement could not force cellphone companies to hand over location data that continuously tracks users.

There are 29 states with laws on drone use and privacy, according to the National Conference of State Legislatures, including warrant requirements for police departments. In at least 18 states, police officials must secure warrants for drone video surveillance and searches.

The EFF isn’t opposed to police and government agencies having drones, Schwartz says. But he would like federal warrant requirements that limit how authorities can collect, retain and share information using the technology. He would urge the courts not to consider drones in isolation but “as one thread in a tapestry” of technological advances.

Arguably, drones are harder to detect than police helicopters and airplanes. Add high-definition cameras, facial recognition software and license plate readers, and the police could have limitless spying capabilities. Daniel Massoglia, of counsel at MK Law in Chicago, thinks civil rights could be violated.

“The risk, as always with surveillance, is that it’s going to target political activists, political protesters, people expressing their First Amendment rights, and it’s going to be targeted at communities of color,” Massoglia says.

In 2018, Chicago Mayor Rahm Emanuel pushed for legislation in Illinois to permit warrantless drones to monitor large gatherings. The bill, though defeated, put Karen Sheley, the director of the Police Practices Project of the American Civil Liberties Union of Illinois, on alert.

“Collecting that information without having to go through standards to ensure that it’s being collected for the right reasons, and with procedures to destroy it, is antithetical to having a free society,” Sheley says.

From his control room on the first floor of the Chula Vista Police Department, Hardesty has flown hundreds of drone missions as part of the FAA’s first Unmanned Aircraft System Integration Pilot Program, which experiments with how to integrate drones into the national airspace. Since October 2018, the department’s drones have swooped in to record crash scenes, track fleeing suspects and find missing people.

Drones are far cheaper to operate than airplanes or helicopters, and they are funded by local and state agencies, according to Alan Frazier, a drone researcher, professor and former Grand Forks County sheriff’s deputy in North Dakota. Police departments may use civil asset forfeiture money and apply for grant money from foundations, the state and the federal government as well, says David Maass, a senior investigative researcher at the EFF in San Francisco.

Lt. Don Redmond, who heads Chula Vista’s program, calls drones a “game changer” for law enforcement. His fleet of four drones responds only to emergency calls. Digital evidence is stored for no longer than a year unless it is part of an ongoing investigation, the department’s website says.

“Our drones do not have facial recognition,” Redmond says. “They are not armed. They’re only there to get on the scene.”

Illinois is the legal model for what some attorneys would like to see nationwide. Under the 2014 Freedom from Drone Surveillance Act, public agencies are barred from collecting any “evidence, images, sounds, data or other information” using a drone.

There are exceptions to the Illinois law in the event of a terrorist attack; if a warrant for probable cause is obtained; or if law enforcement must quickly apprehend a suspect, find a missing person, or respond to a crash scene, disaster or public health emergency. If a court finds the drone use was not justified, it can rule evidence is inadmissible.

But Maass warns that drones could become more invasive, and he foresees a time when they could be up in the air for hours.

“It’s being mindful of the growth of this technology because it does creep over time,” Maass says. 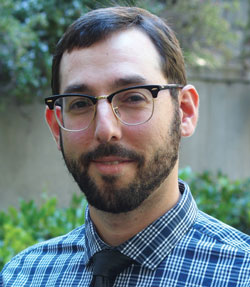 In response to the coronavirus pandemic, police in China used drones to ensure compliance with quarantines and social distancing. In America, more than 600 police departments have employed Clearview AI’s facial recognition software, which uses data collected from billions of social media images, according to a New York Times investigation.

Drones could also be weaponized with rubber bullets or tear gas. A 2015 law in North Dakota bars police from equipping drones with “lethal” weapons but seems to permit nonlethal weapons such as stun guns.

SZ DJI Technology Co., Ltd., or DJI, supplies more drones to police departments in the U.S. than any other manufacturer. Romeo Durscher, a spokesman for the Chinese company, says police drones could become smaller but need to be large enough to house spotlights, thermal imaging cameras and speakers.

“Absolutely not. We make technology for peaceful purposes,” Durscher says.

Jennifer Trock, chair of the ABA’s Forum on Air & Space Law, says the concerns surrounding drones are part of a broader pattern of data harvesting. The legal landscape will evolve, Trock says, but she doesn’t “see the issues as materially different than what we’ve already been addressing on the privacy front.”

Redmond notes that some Chula Vista citizens would like drones to monitor drug dealers who are blighting their communities. His answer is always the same.

“We don’t want to launch a drone to do something that we legally do not have the right to do, or what we’ve told the community we would not do … because as soon as we do that, we’ve lost the trust of our community.”

This article appeared in the June/July 2020 issue of the ABA Journal under the headline: “All-Seeing Eye: Do police drones foster trust or threaten civil rights and privacy?.”