Earning respect comes with the way you handle certain situations 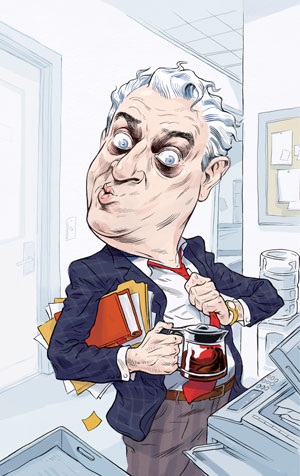 The late, great Rodney Dangerfield always used to complain: "I don't get no respect." He then proceeded to make fun of himself for this little problem, like this: "When I was born, I was so ugly the doctor slapped my mother." Or this: "When I played in the sandbox, the cat kept trying to cover me up." His stories were never about finally getting the respect he wanted. His humor was loser humor.
Most of us don't have the problems with respect that Dangerfield had. But we can't be effective lawyers without the respect of our clients, other lawyers, judges and jurors. When that regard isn't forthcoming—whether because you're old, you're female, you're young, black, Asian, gay or just a new lawyer in the firm hierarchy—it's up to you to do something about it. Respect is earned.

The most important thing you can do in any situation is make sure you are being heard. And I mean this literally. Here's one example: I was trying a federal civil case with a jury against two parties represented by male lawyers. Both were much taller than I and had longer strides. One of them asked for a sidebar, and both men made it to the bench before I did and they started talking to the judge. I was pissed off, of course, but didn't want to let the jury see me sweat. So I gathered my "outdoor" voice, the one that carries throughout a courtroom, and said: "Just a minute, gentlemen. I'll be right there." All three men—the judge and the other lawyers—looked quite shamefaced, and they stopped talking until I got there.

I didn't believe they started without me because they looked down on me or overlooked me or hated female lawyers. I understood that in the heat of battle, it was everyone for themselves. The other lawyers were anxious to get started with their arguments, lest whatever was happening in court that they wanted to confer about taint the jury. But I was not going to be left out; I was not going to let myself be dissed. Nor was I going to let my client be denied representation. In short, I asserted myself.

Young lawyers in particular have problems getting respect from older lawyers and partners in their firms. Here, too, you want to be heard—but not in quite the same way. No shouting! But make sure your work is good, and make sure that the lawyers you are working with see your dedication to the job. When you are given an assignment, do it thoroughly. Do it willingly. And turn it in on time.

Don't get trapped into worrying that an assignment is beneath you or your talents. Everyone has to go through a period of doing scut-work when first starting out. Remember that to a client and to a senior partner, everyone under 30 looks 12. That means they will feel perfectly OK about asking you to make copies of a document for them, and you should be perfectly OK with doing it.

As I'm sure you've heard many times, no one will respect you unless you have self-respect. But how can you reconcile this with doing file reviews or fetching a client a cup of coffee?

Do not think that self-respect means you should comport yourself like a senior lawyer. Nothing is more off-putting to colleagues than a person with a sense of entitlement.

Here's an example of what not to do: A newly minted lawyer walks into a senior partner's office. The SP is dictating a letter (yes, they still do that, but sometimes it's to a machine instead of a person). "Hi, I'm Newbie, and I wanted to introduce myself." He sticks out his hand. SP looks at him but continues to dictate. "I was hoping we could have lunch," Newbie says.

This will not give Newbie the boost in esteem that he is hoping for. Rather, SP will think Newbie is a rude young man without the skills needed to read SP's body language, which is not good for relationships. In fact, SP is probably wondering why Newbie received a job offer in the first place.

Here's another example of a no-no, but not quite as obvious: A young female associate comes into my office to ask me a "personal legal question."

"What's up?" I say. "I got a $250 ticket for parking in a handicapped spot," she says. "I was only there for two minutes. Don't I have an equitable argument that the ticket is too expensive for what I did?"

This young woman's sense of entitlement really shocked me. I cross-examined her—or shall I say I used the Socratic method?—and she still didn't get it that she had done something wrong.

"Did you park in a handicapped spot?" I said.

"Was there a warning sign explaining that you would be fined $250 if you parked there?"

"Do you have a handicapped permit to park there?"

I tried to explain to her that if you do the crime, you have to be prepared to take the punishment. She didn't like my answer and sought out the advice of another partner in the firm. She didn't last long at the firm—not because she was a criminal, but because she believed she was entitled to special treatment.

CUES YOU CAN USE

Use common sense. There is nothing wrong with introducing yourself to a senior lawyer, but pay attention to body language and subtle cues. Is this the right time to say hello? Is she in the middle of something?

As for getting respect from your clients, remember that the journey is actually more important than the result. No lawyer can guarantee a favorable result, but candor all along the way with your client, including delivering the bad news when there is any, will build the kind of loyalty—respect—that you want to have from your client.

One of the most important guidelines for getting respect is this: Be a mensch. That's a Yiddish word meaning an upstanding person. Your word is your bond. If you've promised a draft of a brief to a colleague by a certain date, make sure it's in her hands by that date. If you promised your opponent that you wouldn't object to his request for an extension, keep your promise. If you stand up in court and represent a certain set of facts to a judge or a jury, make sure what you said is true.

Then you'll have the respect you want—and deserve.

This article originally appeared in the May 2015 issue of the ABA Journal with this headline: "How to Be Taken Seriously: Earning respect comes with the way you handle certain situations."

Janet S. Kole is a retired trial lawyer from Philadelphia and the author of numerous books, including Pleading Your Case: Complaints and Responses, and the murder mystery Suggestion of Death.