Emojis Head to a Courthouse Near You 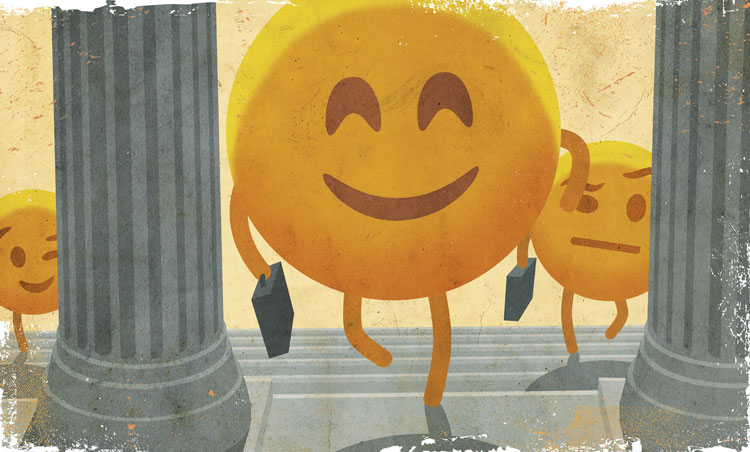 The late July release of The Emoji Movie made official what’s become obvious to the most casual internet observer: Emojis are a pop culture phenomenon. But fame has a price. The pictographs that have proliferated across online communications are increasingly turning up in court.

The terms emoji and emoticon—the keyboard-created forerunner of emojis—have cropped up in about 80 U.S. court opinions to date, with about half the case references happening in the last two years, according to a recent paper by Eric Goldman, a professor at Santa Clara University School of Law.

“As emoticons and emojis play an increasingly important role in how we communicate with each other, they will increasingly raise legal issues,” Goldman says.

The challenge for civil and criminal courts is interpreting emojis without the aid of clear dictionary definitions and interpreting them within the specific contexts in which they appear.

In one survey, for example, people thought Google’s version of the Unicode-defined “grinning face with smiling eyes” emoji meant “blissfully happy,” but they construed Apple’s version to mean “ready to fight.”

To help clear up such misunderstandings, Goldman suggests some fixes: The consortium should play a more active role in promoting cross-platform compatibility, platforms should warn users of the potential for miscommunication with emojis, and an emoji dictionary should be created.

Goldman warns that the judicial system must prepare for “the coming emoji onslaught.” That means taking steps that include showing emojis in relevant opinions, making emojis and emoticons searchable in legal research engines such as Nexis and Westlaw, and letting juries review them as part of trial evidence.

After all, if they’re appearing in movie theaters, why not the jury room, too?

This article appeared in the October 2017 issue of the ABA Journal with the headline “Emojis Head to a Courthouse Near You."