How to create emphatic sentences 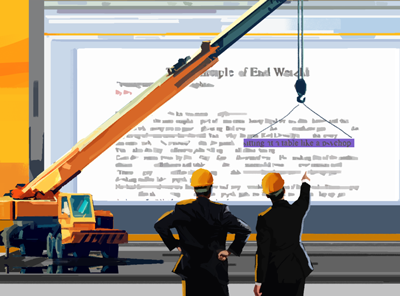 Quick: What’s the most emphatic part of a sentence? Many legal writers don’t know, and this explains why many are so poor at phrasing.

Believe it or not, the most emphatic position isn’t the beginning of a sentence, but the end. That’s why the great Karl Llewellyn said that every sentence ought to be arranged so that the punch word (or sometimes punch phrase) comes last.

That’s also the key to effective joke-telling. It’s all about timing.

Consider a 2015 tweet by Jason Gay, a Wall Street Journal writer. He’s making fun of the modern obsession with cellphones and tablets. It’s the most successful tweet I’ve ever encountered: “There’s a guy in this coffee shop sitting at a table, not on his phone, not on a laptop, just drinking coffee, like a psychopath.”

Not bad for 140 characters. Imagine how unfunny it would have been if he’d said: “There’s a guy in this coffee shop, sitting at a table like a psychopath, not on his phone, not on a laptop, just drinking coffee.” Not funny. The timing’s off.

You might ask what this has to do with legal writing. The answer is everything. A good writer pays close attention to phrasing and to placing strong words in emphatic positions. A poor writer, by contrast, pays little attention to these matters and often ends sentences with words that don’t sizzle, but fizzle.

It doesn’t matter what type of writing we’re talking about. Consider a state legislative provision: “The company may specify on a certificate the expiration date of the policy.” It isn’t a horrible sentence, but in only 13 words, you can already feel the soporific effect. Pile on more sentences like that one, and readers are soon asleep. In the original position, the punch phrase falls four words from the end. But see what happens when we move it right to the end: “On a certificate, the company may specify the policy’s expiration date.”

Now look at a more typical legislative provision, a federal one, in which all the important information is buried in the middle:

“Any new member serving only a portion of a seven-year term in office may continue to serve until a successor is appointed and has qualified, except that such member may not continue to serve for more than one year after the date on which the term of the member would otherwise expire, unless reappointed.”

That’s 54 words—bad for an average sentence, which ought to be closer to 20—and the syntax is hard to parse successfully. Most readers would need to read that sentence two or three times to grasp its meaning fully. One advantage of writing shorter sentences is that you gain more positions of emphasis in the prose—more of those valuable sentence-ends.

Let’s see what we can do in revising that provision:

“A new member serving only part of a seven-year term in office may continue to serve until a qualified successor has been appointed. But unless reappointed, the new member cannot serve for more than one year after the date on which the term would otherwise expire.”

Now we understand the meaning in a single reading.

The principle of end weight works in advocacy as well, and you can use it in both writing and editing. See every sentence as a crescendo. Try reading your prose aloud, exaggerating each sentence’s final phrase. If the reading sounds foolish or the end just trails off, then the sentence probably needs recasting.

Years of editing with this principle in mind have led me to formulate some general rules:

Never end a sentence with a date unless it comes as a surprise (“She was expected on May 13 but didn’t arrive until May 30.”).

Never end a sentence with a citation—especially if you’re putting all the bibliographic material (volume numbers, page numbers, etc.) in the text, as most legal writers infernally persist in doing. If you’re citing in text, arrange the prose so that you have separate “citation sentences.” If you’re citing in footnotes (but still, one trusts, being clear what courts and cases you’re talking about in the text), you’ve uncluttered the paragraph and can write much more emphatically.

Never end with in many circumstances, generally speaking or any similar qualifying phrase. Put a word such as usually or typically earlier in the sentence.

Avoid ending with a litigant’s name unless it comes as a surprise (“Everyone was expecting to see Johnson at the door, but it was Kilgore.”).

Instead of using syntax to provide emphasis, many legal writers misguidedly highlight words and phrases with italics, boldface, boldface italics and (worst of all) underlined boldface italics. (Some even misuse quotation marks for emphasis.) They end up looking like hectoring loudmouths who wrote their briefs at a bar after getting a little sloppy.

I’m talking about mid-paragraph words and phrases, not point headings (which are justifiably boldface). Typically, the more gimmicky the emphatic formatting, the more inept the writer. That’s why Ralph Waldo Emerson, the legendary 19th-century writer, said that in really good prose every word is italicized. That’s an overstatement, of course, but only a gentle one. Use visual emphasis sparingly (I’m not counting white space and bullet dots here). You can do this if you understand syntactic stress points.

An aggravating circumstance in legal writing is that when you cite cases in the text, a great deal of italic type in the form of case names necessarily invades your paragraphs. The extratextual clutter is compounded by volume numbers, page numbers, other bibliographic information and parentheticals that are seen as obligatory appendages. All this clutter dilutes the visual emphasis you’d get by italicizing only one word—for example, not. So with that loss of impact, you might be tempted to boldface the not as well—maybe even to underline it, too, for good measure. The result isn’t the emphatic crescendo you wanted but a distracting, amateurish cacophony.

One bad typographic habit leads to another.

That’s why so many pages of court filings—perhaps 20 percent—have some pages that look like ransom notes prepared by terroristic sociopaths.

The litigators reading this know that this isn’t an exaggeration. It’s just that the writers have lost control. They’re desperate to have their pages looked at, and their desperation shows. They then produce pages that would cause any rational reader to avert his or her eyes immediately.

And, of course, they’ve long since lost sight of how to phrase sentences with natural emphasis.

Let’s stipulate, though, that for some reason you can’t wholly abstain from emphatic type. What guidelines might you follow? How much of a sentence should you italicize? And are italics alone enough?

But never forget that the emphasis is best achieved by smart phrasing, especially by putting the emphasis-worthy term at the sentence’s caboose.

Not long ago I was working with a plaintiff’s lawyer on a settlement proposal. One passage read like this: “At the time when Paul’s plane hit the ground, Paul’s wife Betty was helping a friend with a garage sale. Shortly after the accident, Betty received a call from Billy Nugent. He came by and drove Betty to her parents’ house, where she was told of the death of her husband about 30 minutes earlier.”

Now analyze that passage. Just look at how the sentences end. That’s what makes the passage so ineffective. I explained to my lawyer-friend the principle of end weight, which to him was entirely novel.

Together we worked through the passage and produced this revision: “Betty, Paul’s wife, was helping a friend with a garage sale when Paul’s plane crashed. Shortly after the accident, Betty received a call from Billy Nugent, a family friend, who came by and drove her to her parents’ house. There she learned that Paul had just died.”

When you read powerful prose, pay attention. Notice how the sentences and paragraphs end. And realize that in all your work—both written and oral—this end-weight technique is crucial.

Bryan A. Garner, the president of LawProse Inc., is the editor-in-chief of

Black’s Law Dictionary and the author of Garner’s Modern English Usage (available as a mobile app) and The Chicago Guide to Grammar, Usage, and Punctuation Follow on Twitter @bryanagarner.