“Since the recession, in-house counsel have been increasingly reluctant to pay fees for entry-level associates,” The 2012 Real Rate Report notes. “General counsel often feel that they end up paying for entry-level lawyers’ on-the-job training.” And the report uses actual billing data from 2007 to 2011 to show an increased cost of using associates with less than two years’ experience.

Using a linear regression model, the report estimates total fees for short-term litigation matters that billed 40 hours or more. Controlling for partner and associate hours per matter, the use of an entry-level associate is $72,185, or 17.5 percent more than using more experienced associates.

“Although rates are higher for more tenured lawyers,” the report says, “the net effect of higher rates is often outweighed by the efficiency gains from using more seasoned resources.”

Outside law firms seem to have responded to client pressures on this issue. The report found “in 2009, 7 percent of all lawyer hours billed to a company, on average, were for entry-level associates. This percentage has steadily decreased to just under 3 percent of total lawyer hours in 2011. This trend is present across all practice areas.”

The report credits the big jump in rates for junior associates as “likely a result of the lockstep compensation system and client willingness to pay more after the first few years of experience, when associate productivity is rapidly increasing.” It notes the rate growth for the “latter two tiers of associates outpaced that of partners and paralegals.”

Data analyzed for the 2012 report comes from $7.6 billion in fees billed between 2007 and 2011 by more than 121,000 billers at law firms ranging from Am Law 200 firms to sole practitioners. Further information on the report, including purchase of the entire study, is available at tymetrix.com/press-releases/136/showArticle.

• Data Excerpts From The 2012 Real Rate Report: An Analysis and Report on Law Firm Rates, Trends and Practices, Produced by TyMetrix Legal Analytics and the Corporate Executive Board. 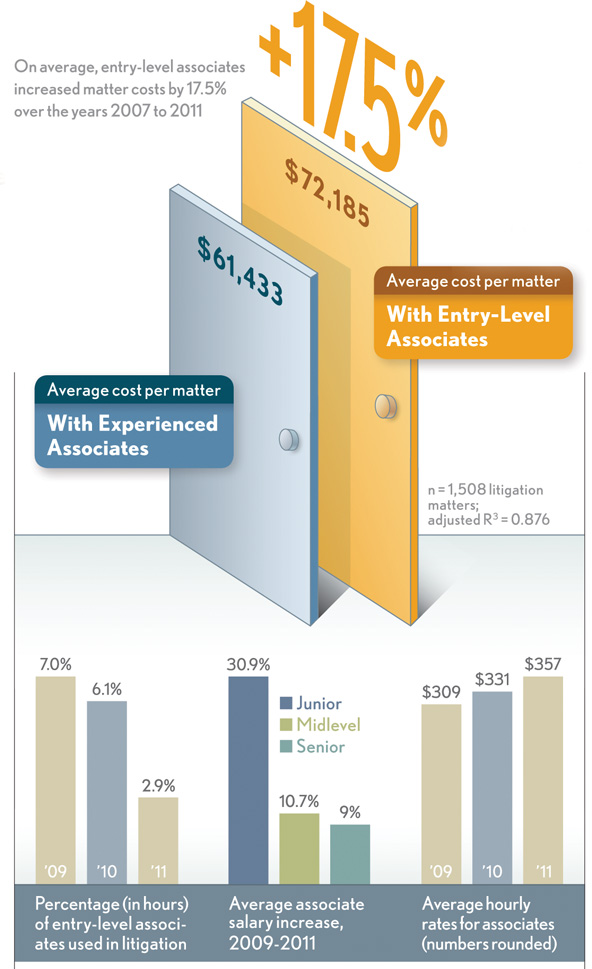