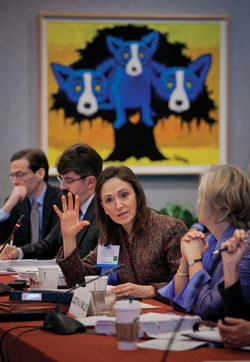 The ABA Commission on Ethics 20/20 is still undecided on whether it will make any recommendation that nonlawyers be allowed to have some form of limited ownership interest in U.S. law firms.

In recent months, the commission’s work on the issue has focused on what the substance of such a recommendation might be. On Dec. 2, the commission released a discussion paper (PDF) on alternative law practice structures, or ALPS, that outlines one possible approach to nonlawyer ownership but does not amount to an actual recommendation.

The commission is asking for comments on both documents by Feb. 29 (comments may be sent to senior research paralegal Natalia Vera at [email protected]).

But after a lengthy discussion at a commission meeting during the ABA Midyear Meeting in New Orleans, it became evident there is no clear consensus among commission members on whether to bring any recommendation to the association’s policymaking House of Delegates. Such a resolution would call for revisions to the ABA Model Rules of Professional Conduct to permit nonlawyers to hold limited ownership interests in law firms.

“It’s very hard to predict, and I’m not a betting man,” said Theodore Schneyer, a law professor emeritus at the University of Arizona who is one of the commission’s ALPS working group co-chairs. The other co-chair is George W. Jones Jr., a Washington, D.C.-based partner at Sidley Austin.

The question facing the commission is whether to propose revisions to the Model Rules that would create the possibility of major changes in the ownership structure for U.S. law firms. Reflecting the larger debate on the issue, some commission members support the concept of limited nonlawyer ownership as recognition of the changing nature of law firms as business and professional entities. Other members, however, have expressed concern about the impact on the internal operations of law firms and how they would be regulated.

Alternative law practice structures currently are prohibited in every U.S. jurisdiction except the District of Columbia. They are becoming more common, however, in foreign jurisdictions, notably the United Kingdom, Canada and Australia. American law firms doing business overseas are in a quandary over how to balance the more permissive rules on business structures in other countries and the more restrictive regulations in U.S. jurisdictions.

“We can’t ignore what happened in the U.K. and Australia,” said Carolyn B. Lamm, the Washington, D.C.-based partner at White & Case who appointed the commission when she was ABA president in 2009. In those countries, she said, demands by consumer groups opened the door to increased legislative regulation of law firms.

“Does the ABA want to abdicate leadership because an issue is too tough, and leave it to legislatures and the courts? No,” Lamm said.

But to some early opponents, ALPS sounds a lot like multidisciplinary practice, which the House of Delegates rejected about a decade ago.

“You call it ALPS; I call it a mountain too far,” Lawrence J. Fox told the commission at an earlier public hearing. Fox, a Philadelphia-based partner at Drinker Biddle & Reath, helped lead the fight against the earlier proposal to amend the Model Rules to allow multidisciplinary practice. “This amounts to MDP,” he said, “and I thought those culture wars were over in the early 2000s. I think this proposal should be tabled, gracefully.”

Some members said proposing even limited nonlawyer ownership might be premature. Commission co-chair Michael Traynor was among those who suggested it might be more appropriate for the commission to issue a white paper. Traynor of Berkeley, Calif., is a past president of the American Law Institute. The commission’s other co-chair, Jamie S. Gorelick, is a partner at Wilmer Cutler Pickering Hale and Dorr in Washington, D.C.

The District of Columbia permits lawyers to share a management or financial interest, or both, with nonlawyers in entities that are limited to providing legal services. The approach articulated in the commission’s discussion paper would largely follow the District of Columbia model, but it would go beyond it in two key ways:

• Lawyers in a firm would retain controlling voting rights and financial interests in the firm.

• Lawyers would make reasonable efforts to establish a nonlawyer’s professional integrity before that person may gain a financial interest in the firm.