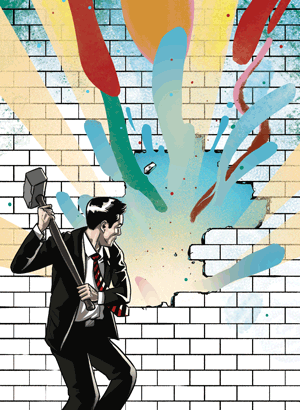 In pursuit of its goal, the Los Angeles-based association has filed a number of lawsuits in state and federal jurisdictions. The website states “the issue the NAAMJP is litigating is whether the equal rights, privileges and immunities inherent in bar admission on motion, which the United States Supreme Court has squarely held is a constitutionally protected privilege and immunity ... and has been adopted in 39 states, resulting in the admission on motion of over 60,000 attorneys, should be provided to all American attorneys,” referring to the 1988 decision in Supreme Court of Virginia v. Friedman.

But the association’s commitment to its cause has not always translated into victories in the courts. In two recent cases, for example, judges dismissed the association’s challenges to admission rules adopted by the federal district courts for the districts of Maryland and New Jersey. In both actions, the MJP association argued that the admission rules violated the First Amendment, the equal protection clause and the supremacy clause of the U.S. Constitution, along with the Rules Enabling Act of 1934, which delegated procedural rulemaking power to the Supreme Court.

“The challenged local rules assume that we live in the Garden of Eden,” says Joseph R. Giannini, a director of the MJP association. “The tree of knowledge does not stop growing or producing specialized knowledge based on a state boundary line. People today often live in four or five states over their lifetime.”

Experts in the legal ethics field say the association’s challenges are one indicator of the wider debate regarding bar admission.

“There is an ongoing debate about whether there should be any barriers for admission to federal district courts and even to bar admission in other states once a lawyer has been admitted in one state,” says law professor Peter A. Joy of Washington University in St. Louis. “Those such as NAAMJP argue against barriers to admission and contend that the admission barriers infringe on First Amendment rights, drive up the costs of litigation, interfere with a person’s right to counsel of one’s choice, and are anti-competitive.”

But “in spite of these and other arguments, there is still a strong belief, reflected in district court rules, that a lawyer should be admitted in the state in which the federal court is located,” Joy says. “This is based on the federal district courts wanting local control of the lawyers admitted to practice before them and to ensure that the lawyers are subject to professional discipline by state bar disciplinary authorities.”

Paul M. Sherman, a senior attorney at the Institute for Justice, a libertarian public-interest law firm in Arlington, Virginia, provides other reasons for changing the rules on bar admission.

A growing number of lawyers have specialized practices for which detailed knowledge of state law is largely inapplicable, Sherman says. “There are also many basic legal services that could be provided competently and less expensively by paralegals or other nonlawyers,” he says. “The internet has made it possible for people seeking legal advice to get it from a vastly larger group of people, both lawyers and nonlawyers. If the bar doesn’t adjust to these realities, it’s going to look increasingly like its primary focus is not on ensuring the competence of legal practitioners but on protecting its members from competition.”

In the Maryland case, the U.S. attorney’s office for the District of Columbia, which is authorized to defend federal court rules, filed a motion to dismiss, which was granted by a U.S. district judge from North Carolina, who sat by designation to avoid any possible conflict of interest. On appeal, a three-judge panel of the 4th U.S. Circuit Court of Appeals at Richmond, Virginia, affirmed in NAAMJP v. Lynch, decided June 17.

On its First Amendment claim, the MJP association contended that the admission rule infringed on the freedoms of speech, assembly and petition. The right to petition and assembly is a particular form of speech, says Giannini.

It is speech in which an individual or a corporation can speak directly to the government about their grievance, which requires the government to correspondingly listen to that grievance and rule upon it, he says.

The 4th Circuit rejected the First Amendment argument, finding that the district court’s rule was simply a regulation of a profession and a generally applicable licensing provision. The court acknowledged the professional speech doctrine but reasoned that it allows the government to license and regulate professionals without violating the First Amendment.

The professional speech doctrine has been superseded by the Supreme Court’s decision in Reed v. Town of Gilbert, says Giannini. That 2015 decision affirmed that content-based laws must be subject to a strict scrutiny test to pass First Amendment muster. “The local rule challenges pure content discrimination,” he says. “The subject of the content discrimination is federal substantive law and procedure. Government counsel is allowed to speak in petition regardless of where they are admitted and where they have their office, but out-of-state attorneys from 35 states are denied this constitutional right, solely because they come from states that do not provide reciprocal licensing to Maryland Court of Appeals lawyers.”

Sherman, who has written extensively about occupational speech and the First Amendment, questions the appeals court’s application of the professional speech doctrine.

“The 4th Circuit likely reached the right result but for the wrong reason,” says Sherman. “The Supreme Court has never adopted a ‘professional speech doctrine’ and in recent cases, has even reviewed restrictions on lawyers’ speech with strict scrutiny. The 4th Circuit’s view that speech between ‘professionals’ and their clients receives no First Amendment protection at all is impossible to square with Supreme Court precedent and is the most extreme view taken by any of the circuits.”

The MJP association’s challenge to the admission rule adopted by the U.S. district court in New Jersey suffered essentially the same fate as did the association’s lawsuit in Maryland, when a judge from Pennsylvania sitting by designation granted a motion to dismiss.

The rule followed by the federal district court in New Jersey requires attorneys who are not licensed in New Jersey to apply for pro hac vice admission for each case they handle in federal court and pay a $150 fee for each admission.

The 3rd Circuit at Philadelphia affirmed the district court’s dismissal in NAAMJP v. Simandle, decided July 14. On the First Amendment claim, the 3rd Circuit wrote that the rule does not discriminate against the content or viewpoint of any speaker and said the rule places minimal limitations on expressive activities.

Despite its setbacks in court, the MJP association continues to advance the argument that barriers to admission are unconstitutional and inconsistent with current realities in the legal profession. The association has filed a petition for Supreme Court review of the 4th Circuit’s decision in the Maryland case.

But “until and unless there develops a circuit split on bar and court admission rules, I do not believe that this issue will be reviewed by the U.S. Supreme Court,” Joy says.

This article originally appeared in the October 2016 issue of the ABA Journal with this headline: “Tear Down This Wall: Two lawsuits that seek to loosen bar admission rules in federal district courts are dismissed, but the issue isn’t going away.”