'Every day was totally pressure-filled, client-filled. There was no break.' 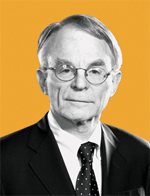 ‘‘Andy Warhol got it right: Everybody has his or her own 15 minutes.”

For H. Rodgin Cohen, who led hundreds of law­yers and represented sev­en financial firms through ne­gotiations for Wall Street’s $700 billion bailout, his finest 15 minutes came this past fall, 40 years into a distinguished career. But those minutes bled over weeks and months, making one day nearly impossible to distinguish from the next.

“What made this so unusual is that it was day after day. Every day was totally pressure-filled, client-filled. There was no break,” Cohen says.

A glimpse? On Sunday, Sept. 14, Cohen spent the morning at his office in Manhattan’s Financial District trying to find a way for Barclays to acquire Lehman on the eve of that investment giant’s bankruptcy filing. The British bank walked that day, although it later snapped up Lehman Brothers assets for $1.75 billion. Another private transaction Cohen spent costly hours trying to secure fell through as well, and by noon Cohen was on his way to the Federal Reserve Bank of New York eight blocks away, his concern focused on AIG.

“It was deal after deal at that point,” Cohen says. Wachovia was beginning to explore more options with Morgan Stanley. Cohen and his colleagues were also working a potential deal between Washington Mutual and JPMorgan Chase, plus the one undis­closed matter.

“I cannot remember a time when there were multiple issues on the same day,” Cohen says. “That’s what made this specific day so difficult.”

Cohen left the Federal Reserve at 2 a.m., spent a few hours at his home outside the city, and was back in his office by 7:30 a.m. to prepare for another round at the Fed.

“Because it’s so overwhelming, you realize the enormity, but you’ve got to keep focused and keep moving. This is really what I’ve done, what the firm has done; there’s just an exponential factor. We’ve done these things before—now you just square it or cube it.”

While meetings at the United States government’s largest bank, which sits atop roughly 5,000 metric tons of gold bullion, are “very, very unusual,” for Cohen the great­­est exhilaration that week involved a never-used statutory amendment written nearly two decades ago.

“Literally 18 years earlier we had worked on an amendment to the Federal Reserve Act in case this ever came about. The exciting parts are things you’ve thought about and planned for actually being realized.”

During the 1990-91 credit crunch, Cohen and his colleagues, increasingly concerned about the ability of the Fed to lend to investment banks, drafted a “rel­atively small change” to the act easing the Fed’s ability to lend to banks and provide market liquidity.

“I thought, ‘I can’t believe we are using this.’ You’ve planned for something and it wasn’t just wasted.”

Keen foresight and accolades aside (the New York Times named Cohen one of “The Street’s Emergency Responders”), Cohen is quick to cite Warhol’s ubiquitous line about fame.

“The real heroes are not in the private sector,” he says. “The real heroes are at the Fed, Treasury, the FDIC, and they are not being well-compensated for this. People say, ‘It’s terrible how busy you are.’ But there are a number of people in these government agencies going at the exact same pace I’m at.”

The average partner at Sullivan & Cromwell made $3.06 million in 2007, according to data from American Lawyer magazine. In contrast, the highest salary grade at the Federal Reserve caps out at $191,460, according to the agency’s website.

Cohen’s first quiet moment in nearly two months came at the beginning of November, a Saturday afternoon spent with his golden retriever Mingus (as in jazz musician Charles Mingus), and a rare BlackBerry-free dinner with his wife.

Would Cohen—once dubbed “the main man” by TheLawyer.com—agree to helm one of Wall Street’s largest white-shoe firms again?

“Yes, it’s fascinating to be involved with events that are really at the intersection of policy and politics,” he says. “You get to work with a fascinating array of people and lawyers.”

Even at 2 a.m.? Cohen concedes, “Perhaps a little bit less fascinating at 2 in the morning than at 4 in the afternoon.”