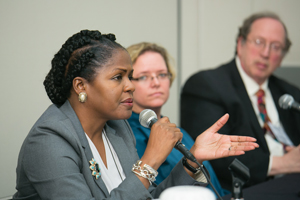 Carla Adkinson-Johnson leads a discussion on the matter of child discipline. Photo by Kathy Anderson.

Seventy-seven percent of Americans agree that it's sometimes necessary to discipline their children with corporal punishment—but where does spanking end and abuse begin?

That was the question at "Disciplining One's Kids: What's 'Reasonable' Under the Law?" held at the ABA Midyear Meeting.

The answer is complicated in the United States. According to Howard Davidson, director of the ABA Center on Children and the Law, states have different approaches. By far the most common approach, used in 26 states, says parents may use reasonable force if it's necessary to reasonably maintain discipline. Eight others say parents may not use extreme or excessive force. Other states define specific prohibited acts, forbid cruelty or torture, or consider things like the age and size of the child.

Because so many states leave it up to child welfare workers or courts to decide what qualifies as excessive or unreasonable, Davidson said race and class biases can creep in.

Mary Scanlon, a former family justice prosecutor who is now in private practice in Plano, Texas, added that visceral reactions also play a large role with juries. Texas allows parents and guardians to use force to the degree they believe it's necessary for discipline or promoting the child's welfare. That means what's acceptable is a community standard that can differ from place to place. 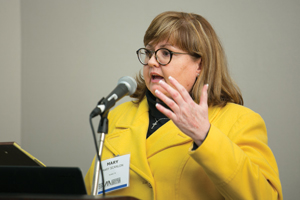 The panel also included presentations of research on physical discipline from two professors who have studied the issue. Carla Adkison-Johnson, a professor of counselor education and counseling psychology at Western Michigan University, focuses her work on discipline in African-American families.

Though the stereotype is that African-American parents are more likely to use corporal punishment, she says, that is actually on the extreme end of a continuum of practices. Discipline was less likely to be used by African-American fathers and when the child is older than 12, she said.

Elizabeth Gershoff, a developmental psychologist at the University of Texas in Austin, said 70 to 90 percent of parents in any racial category she studied used corporal punishment. Nonetheless, she said, multiple studies have concluded that such punishment doesn't create short-term compliance or help children learn right from wrong in the long term. Furthermore, she said, spanking is correlated with increased antisocial behavior, more mental health problems and less self-regulation. Increased aggression was still visible even when studies control for maternal warmth and cultural attitudes. 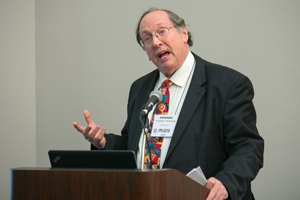 Scanlon doesn't think it's likely to happen in her home state. "Not that I don't think it's a good idea," she said, "but this is still Texas."

"Experts Debate Line Between Spanking and Abuse," April, page 65, described Howard Davidson, director of the ABA Center on Children and the Law, as stating that the ABA has called on governments in the United States to prohibit all corporal punishment. The policy adopted by the ABA House of Delegates in 1985 "opposes the use of corporal punishment in institutions where children are cared for or educated and urges that state laws which permit such corporal punishment be amended accordingly."