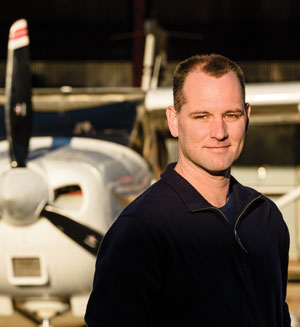 Flight instructor Chris Dupin flew two friends to a vacation spot: “With flying, the ability to look for adventures that are farther away has increased.” Photographs by David Hills

Editor’s note: Since publication of this story in the print edition of the ABA Journal, the U.S. Court of Appeals for the District of Columbia Circuit denied Flytenow’s request to overturn the Federal Aviation Administration’s ban on the Web-based service that facilitated cost-splitting arrangements between private pilots and passengers. Flytenow announced on its blog that it has shut down its service.

While planning a whitewater rafting trip on the Gauley River in West Virginia, Chris Dupin calculated it would take about six hours to drive there from his home in Washington, D.C.

An Air Force major and flight instructor, Dupin and two friends decided to fly instead—with Dupin as the pilot. The group got to West Virginia in two hours. The cost of gas, oil and rental for a Cessna 182 worked out to $200 apiece.

“My friends were really happy with it. With flying, the ability to look for adventures that are farther away has increased,” says Dupin. Having seen the advantages of sharing costs, Dupin was among a group of pilots that used Flytenow, a Web-based app that facilitates cost-splitting arrangements between private pilots and passengers.

Before services like Flytenow, pilots posted flight plans on private airport bulletin boards in order to find potential passengers to share the cost of flying, which is legal under Federal Aviation Administration rules.

But the FAA determined, in a 2014 opinion letter, that private pilots using Flytenow, as well as a similar service, AirPooler, are flying people for money, in violation of agency rules. The FAA claims that pilots engaged in common carriage—a common-law term that implies “holding out,” or offering, transportation services for a fee—are subject to significantly more stringent safety requirements.

“What they have said is that pilots are air carriers like Delta or private charter operators,” says Rebecca MacPherson, a D.C. lawyer who represents AirPooler.

Federal regulations forbid private pilots from transporting people or property for a fee. But they can share flight costs with passengers, like Dupin did, provided that the pilots don’t make a profit from the arrangements and all parties have specific plans at the flight destinations.

Flytenow filed a legal challenge to the agency’s 2014 finding, arguing that it is arbitrary and violates pilots’ First Amendment rights to post information about their flights publicly. The matter is pending in the U.S. Court of Appeals for the District of Columbia Circuit. Federal legislation directing the FAA to revise regulations about private pilot communications and cost sharing was recently introduced in Congress.

“What Flytenow is doing is allowing two people to communicate. In my view, that’s a protected First Amendment activity,” says Jonathan Riches, the Goldwater Institute’s director of national litigation and general counsel. The Phoenix-based organization describes itself as an advocate of limited government.

The FAA takes issue with Flytenow and AirPooler because the websites allow pilots to share flight plans with a much larger audience than those reading the small airport bulletin boards where pilots traditionally posted such information. For the sites to work under federal law, the FAA would probably need to change its rules about pro rata reimbursement, says Joseph J. Vacek, a lawyer and associate professor at the University of North Dakota’s School of Aerospace Sciences.

“It’s a fundamental shift because of enhanced communication opportunities we all have at our disposal for free now,” he says, adding that when the pro rata reimbursement rule was introduced more than 50 years ago, it’s unlikely the FAA was thinking about Internet-enabled global communication.

The Federal Aviation Administration is also concerned that pilots might offer significant discounts compared to regular commercial carriers or charter operators. Hiring a chartered plane to fly from Boston to Cape Cod would cost approximately $1,000. A private pilot not following FAA regulations might offer the flight for much less.

“Things like Flytenow get into trouble because they leave a really good chain of evidence,” Vacek says. “Before the Internet became popular, the FAA usually had no way of knowing that private pilots were following the rules of pro rata reimbursement when they flew passengers.”

On its website, Flytenow describes those in search of seats as “enthusiasts” rather than passengers. “After you create an adventure, enthusiasts will be able to search and request to join your flight,” the site tells pilots. “Once you accept a request, enthusiasts will be prompted to pay their portion of shared expenses.” 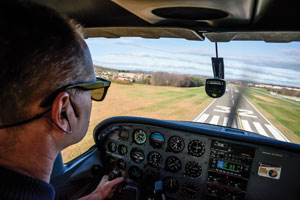 In its appellate response, the FAA cited Flytenow’s description of its services to support the government’s claim that Flytenow pilots are engaged in common carriage. “Flytenow pilots offer point-to-point transportation by air to interested strangers in exchange for money—the traditional hallmark of a common carrier,” the FAA wrote.

The agency also found that private pilots using Flytenow are clearly engaged in holding out by posting their flight plans on the Internet. MacPherson, the lawyer for AirPooler, agrees that pilots using the Web apps are offering their services, but she disputes the government position that the pilots are holding out as common carriers, because the common-carriage definition includes compensation.

“If you really look at traditional common-carriage operations, there is clearly a profit motive—maybe the carrier won’t be successful, but it isn’t in the business to lose money,” MacPherson adds. “Under the ride-share plans, the pilot can never make money and will always be out of pocket for at least his pro rata share of allowable direct costs and all indirect costs.”

The flight sites might have more luck with the FAA if they operated like Facebook, where users only communicate with existing connections, says Dupin, who would probably not be comfortable flying with passengers he doesn’t know.

Neither would Vacek. “Most of the time there is some kind of connection, even if the passenger is a friend of a friend. Flying in a private plane can be pretty rough.”

Vacek would fly with a private pilot he doesn’t know, but he adds that as a flight instructor and faculty adviser for the University of North Dakota’s aerobatics team, he can assess a pilot’s abilities before takeoff. “Someone who might be relatively inexperienced as a pilot would be just fine for a nice, calm, clear day,” he says. “If it’s a dark and stormy night, that’s a very different calculus.”

Some have compared the flight-arranging apps to Uber. But the comparison is not apt, MacPherson says, because Uber drivers make a profit, whereas the flights involve sharing costs. A better comparison, she adds, would be “slug lines,” where rush-hour drivers going into cities like D.C. and San Francisco pick up passengers they generally don’t know. In exchange for riding in cars with strangers, people get access to carpool lanes and avoid public transportation.

It’s unlikely that the federal government would regulate slug lines, MacPherson says. And like participating in slug lines, going on app-arranged flights presents a certain amount of risk, she notes. People can choose if they want to take it.

“I don’t think there are that many people who would be willing to get in the back of a two- to four- man plane, not paying for anything but their share of gas and maybe landing fees, and believe that they are getting the equivalent level of safety as a commercial flight,” MacPherson says. “You may not know anything about the person you’re flying with, but that’s your choice.”

This article originally appeared in the January 2016 issue of the ABA Journal with this headline: “Flight Fight: The FAA claims that airplane ride-arranging sites violate federal regulations.”