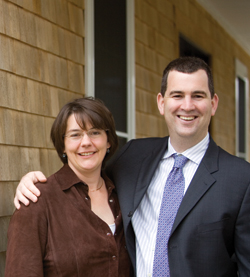 Erik Hammarlund says he wouldn’t have it any other way. Since bringing his wife, Karena, a former accountant, on board as office manager about a year ago, the Martha’s Vineyard, Mass., solo says he has more harmony in both his professional and personal lives.

“We realized it was the perfect solution for us,” says Hammarlund, who handles corporate work, litigation, real estate and trusts. “There’s no way in a million years that I could hire someone as trustworthy as my wife or who shares my interests to the same degree. It gets to a whole concept of team that would be impossible to do with someone else.”

It helps that Hammarlund and his wife spent time early on in their 12-year marriage living on a sailboat in confined quarters, where they often saw only each other for days at a stretch. That was good training for today, as they again are a constant presence in each other’s lives.

“It’s true, we’re around each other all the time,” says Hammarlund, who admits that the first six months of the arrangement presented a “weird power differential.” But the couple got through it, each staking out distinct roles during the workday. And they have since set ground rules to keep office discussions out of their home life.

“I don’t think it’s for everybody,” adds Hammarlund, whose wife takes no salary for services he estimates would cost around $75,000 a year on the open market. “You have to be willing to deal with an initial feeling of discomfort.”

Solos typically have strong opinions about bringing family members into their practices—it either works or it doesn’t, depending on variables like the would-be employee’s qualifications, personal dynamics, work styles, and the ability of both parties to compartmentalize work and home life.

But in the midst of a still-volatile economy, independent lawyers (like many other small businesses) are increasingly turning to family members for discounted help.

“The family usually tries to do whatever it can to help the business survive during times like this,” says Andrew Keyt, executive director for the Family Business Center of Loyola University Chicago. “Economically, it often makes sense to use a family member.”

Keyt cautions that the success of these decisions hinges on the willingness of the family member to take on a professional role in the law practice, as well as clear job expectations and strict boundaries that keep family issues out of the workplace. He says it’s also important to pre-negotiate an exit, so that if the situation proves unsuccessful, family relationships can be preserved.

To be sure, financial benefits do tip the scale in favor of bringing family into the professional fold. That is the case with Lynda L. Hinkle, a newly minted solo in Marlton, N.J. She depends on her husband, a seasonal construction worker who is completing a master’s degree in social work, for two days a week of office support.

He helps with marketing her law practice and developing her website.

“It’s mutually beneficial,” she says, joking that the two argue about traffic on the ride to work, but she is clearly the boss once they enter the office. “He provides me with those extra hours that I just don’t have every day.”

Many solos say work and family lives often blur anyway, as they sacrifice long hours to get their businesses off the ground. Family members entrusted roles in the practice sometimes gain important insights into the challenges of running an independent business.

Such was the case with Frank M. Nunes, a personal injury lawyer in Fresno, Calif., whose dependence on family began when his father-in-law helped him set up his office in August 2007. Since then his mother-in-law, mother and school-aged sons have also pitched in. These days, Nunes’ wife functions as the bookkeeper, spending three days a week or more in the office.

“Anything that doesn’t kill the marriage makes it stronger,” he says. “She’s more in tune with what I do.”