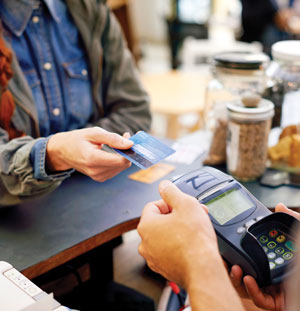 Merchants are prohibited by law in 10 states from imposing a surcharge on buyers who use credit cards for purchases. Yet those same laws allow merchants to offer discounts to those who pay with cash.

The result is that those who use credit cards are penalized by paying more than those who pay with cash, but you just can’t call the higher-priced transaction a “surcharge.”

Sound confusing? Well, these so-called no-surcharge laws have caused a conundrum of sorts in the federal courts. The laws have fared differently in federal appeals courts, setting the stage for possible future review by the U.S. Supreme Court.

Some merchants and consumer rights advocates believe such no-surcharge laws violate First Amendment free speech rights because they restrict the way merchants can describe transactions. They question why merchants can call something a “discount” but are limited in talking about higher fees for credit cards. State officials and the credit card industry counter that the laws merely regulate price controls and economic conduct. According to this view, the laws don’t even implicate the First Amendment.

Duana Palmer of Tallahassee Discount Furniture was one of the merchants who challenged Florida’s law. She did so “because it is important to me to be able to give the lowest and fairest prices to my customers,” Palmer said through her Washington, D.C.-based attorney, Deepak Gupta.

“These lawsuits are important because these laws hide the cost of credit from consumers,” explains Gupta, who has filed all four lawsuits on behalf of different merchants. “These laws were enacted at the behest of the credit card industry in the 1980s. The credit card companies initially fought dual pricing. When they lost that battle, they switched to a battle over labels.”

“These laws definitely affect freedom of speech from at least two stakeholders’ perspectives—the rights of the speakers/merchants and the rights of receivers/consumers,” says Clay Calvert, director of the Marion B. Brechner First Amendment Project at the University of Florida. “I believe they do violate the First Amendment.”

The 2nd and 11th circuits of the U.S. Court of Appeals have different interpretations with respect to the New York and Florida no-surcharge laws. Last September, a unanimous three-judge panel of the 2nd Circuit at New York City upheld the state’s law in Expressions Hair Design v. Schneiderman. The law “regulates conduct, not speech,” reasoned the court. “If prohibiting certain prices does not implicate the First Amendment, it follows that prohibiting certain relationships between prices also does not implicate the First Amendment.”

“All the New York law does is ban the conduct of imposing a higher price for the use of a credit card,” explains Meier, who wrote an amicus brief defending the law in the case. “The law regulates conduct, not speech. Imposing a control on price, a form of economic regulation, is not speech.”

The plaintiffs have filed for full-panel review in the 2nd Circuit.

However, a different result came out from the 11th Circuit at Atlanta. In November, a divided three-judge panel of the appeals court invalidated Florida’s law. The majority determined that the Florida law directly impacted speech. “The statute targets expression alone,” the majority wrote. “More accurately, it should be a ‘surcharges-are-fine-just-don’t-call-them-that’ law.”

The 11th Circuit characterized a surcharge as nothing more than a “negative discount.” The opinion noted: “If the same copy of Plato’s Republic can be had for $30 in cash or $32 by credit card, absent any communication from the seller, does the customer incur a $2 surcharge or does he receive a $2 discount?”

Chief Judge Edward Carnes dissented, criticizing the panel majority for creating “a rewritten [law] with a great big First Amendment bull’s-eye on it.”

“The Supreme Court has long held that the government can regulate economic conduct—including the prices charged by merchants—without violating the First Amendment,” Carnes wrote. He also noted that the “majority places our circuit in direct conflict with our sister circuit on this issue.”

Whitney Ray, director of media relations for the Florida attorney general’s office, said the attorney general filed for en banc review because “we disagreed with the panel majority’s finding that [the law] is facially unconstitutional.”

The difference in approach reflects the importance of a threshold issue known as the speech-conduct dichotomy or speech-conduct defense. The idea is that the First Amendment protects speech, not conduct. While some forms of conduct are expressive, the idea is that economic regulation is a form of conduct that is not expressive enough to trigger First Amendment review.

“Increasingly, the government runs to the conduct-not-speech defense in the face of just about any First Amendment challenge involving commercial activity,” Walters says. “The court correctly identified the challenged law as involving a matter of speech—specifically mandating what must be said, and what must not be said.”

The constitutionality of one or more of these no-surcharge laws could wind up before the U.S. Supreme Court. “Taking up Dana’s Railroad Supply and Expressions Hair Design as companion cases would give the court a great opportunity to resolve some key doctrinal problems lurking in both cases,” says Calvert. “These include clarifying the fundamental line between speech and conduct.”

Meier agrees. “I believe this issue will go to the U.S. Supreme Court because we have a classic circuit split,” he says.

Gupta also sees the fate of the laws being decided by the high court. Petitions for en banc review have been filed in the 2nd and 11th Circuit cases. Cases are pending before the 5th and 9th circuits. In February 2015, a federal district judge in Texas upheld the state’s no-surcharge law, while in March 2015, a federal court in California invalidated a similar law.

“Merchants don’t want to have different prices and policies in different states,” Gupta says. “There has to be a national answer to this problem.”

This article originally appeared in the March 2016 issue of the ABA Journal with this headline: “Cash or Credit? Federal appeals courts split over law on surcharges.”