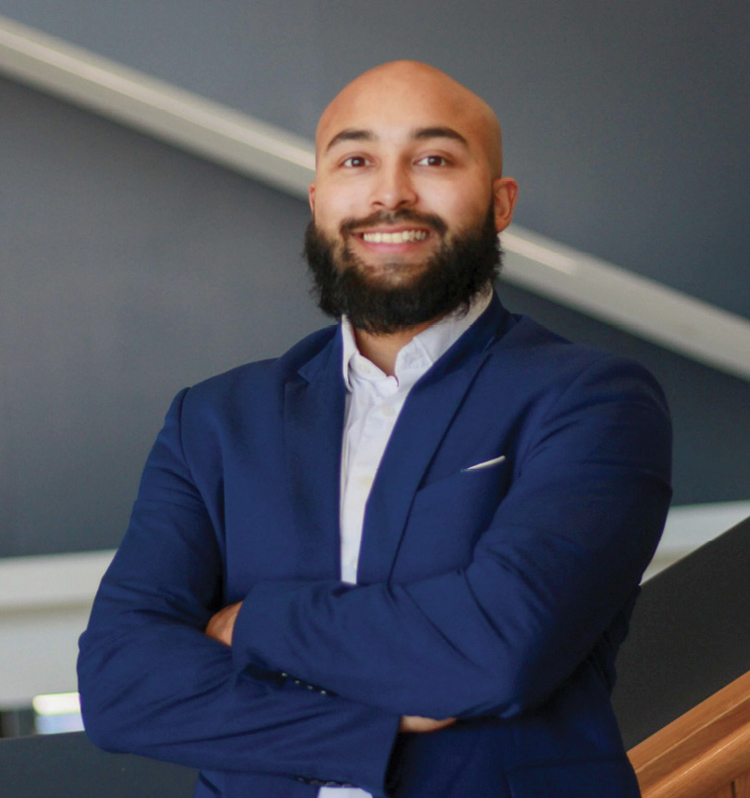 Amando Dominick pursued a career as an assistant district attorney to be part of the solution. Photo by Ann Peachey, Temple University Beasley School of Law

I wish I could begin my story with some childhood aspiration like “I wanted to be a lawyer since learning of Thurgood Marshall’s crusades” or “This has been my passion ever since I first saw My Cousin Vinny.” However, the law forced itself into my life in a more direct way. I was born in New Orleans and raised through Hurricane Katrina’s devastation. I was a senior in high school when my father was arrested, convicted and handed a long sentence in state prison that he is still serving today. This traumatic experience left 17-year-old me with a load of emotions and questions that would take years to explore.

I started college at Baylor University in Waco, Texas, as a chemistry pre-med major because I did well on high school science tests and wanted to help people. By the time I graduated, I was a psychology major with numerous neuroscience classes behind me. I had been a staff writer for the university newspaper and had worked at a nonprofit, at an elementary school and at Jimmy John’s.

Armed with a college degree, I was already ahead of my mother, who didn’t finish ninth grade. But, having no lawyers in my family, I was unsure of the best way to utilize my talents and experiences to achieve my aspiration of helping others through a meaningful career. Adding to this uncertainty of my own future was my father’s situation still weighing on me from the inside out.

After graduating from college, my expanding worldview led me to experiment with politics. This journey of self-discovery coincided with the polarizing 2016 presidential election. One topic that naturally drew me in was the phenomenon of mass incarceration, which had recently become a prominent part of the national conversation. Criminal justice reform was a hot issue for politicians of all stripes during this election cycle. From undignified stop-and-frisks to full-blown wrongful convictions for serious offenses, I heard the stories of people—often Black and brown like me—who were wronged by the system. From discretion in charging to plea deals to bail and sentencing, I learned about the unique power that prosecutors wield over people’s lives. I also thought of my own family members who were career police officers—good people doing their best.

I finally began contextualizing my experiences. I thought for years that the frustrations plaguing me were incredibly isolating. On the contrary, my experience was not a particularly unique one. Rather, it was a uniquely American one—I was one of many children of incarcerated parents in this nation.

I spent over a year soaking in these realizations. I got a job as a paralegal at a big law firm, but like my college jobs, I knew this was not what I wanted to do forever. I eventually decided that we needed more prosecutors with my lived experiences, so I set my sights on law school. I eventually chose Temple University in Philadelphia. This was a big life change for someone who had never crossed the Mason-Dixon Line. Not only was Temple a great law school that offered me a fair scholarship, but it was also in a city that recently had elected a district attorney who campaigned on prosecuting the “right” way.

Heading into law school, the previous frustration I felt because of my father’s situation was replaced by a renewed relationship with him. I had a searing eagerness to help fix the criminal justice system. I was excited about a new life filled with new friends and new opportunities. Life, however, had one more major twist to throw at me.

I was at home one evening during my first semester 1L year working on a memo when I got a phone call from my stepfather. Strange, I thought, because he didn’t call me often. I answered. He was sobbing. My stomach turned. Through tears, he told me that my mother—whom I had spoken to mere hours before—had been killed in a botched carjacking. Stunned, speechless and shaking, I was rattled to my core. The new city and new life suddenly felt like an ocean separating me from my family. In a matter of hours, I went from writing a memo to writing my mother’s eulogy. The offenders—all teenagers—were found and prosecuted. I took a sentencing class during my 2L year—the same year I returned home to participate in their sentencing hearing. I even spoke to the local news afterward about it. Anything I learned in school was incomparable to being in that room as a co-victim of homicide.

Though my world paused, the rest of the world did not—so I carried on with a strengthened resolve. My mother’s situation taught me the importance of prosecution to provide accountability for those who harm others, safety for communities and some level of resolve for victims. My father’s situation showed me the importance of fairness, prosecutorial integrity and the collateral consequences of incarceration. Back at school, I zeroed in on creating my own path. I took more criminal law classes. I founded the organization for first-generation law students at my school. I earned internships, first with the federal prosecutors and later with the district attorney’s office.

Then, in March 2020, COVID-19 hit. My exciting second-year summer internship with the Philadelphia District Attorney’s Office became a summer-long Zoom meeting conducted from my living room. Despite this, I enjoyed the taste of the job, and I informed them of my interest. Months later, I got what I wanted years ago: an offer to be not only a lawyer but a prosecutor.

I am now several months into my role as an assistant district attorney with the Philadelphia District Attorney’s Office. Each day I spend hours in court and hours in the office doing my best to keep communities safe while being fair to those accused of crimes. Each day brings both challenges to figure out and opportunities to be better. Just as I was excited on my first day of law school to pursue this path, I now wake up each day grateful that I have the opportunity, position and discretion to do the right thing with the full backing of my lived experiences.

Amando Dominick is an assistant district attorney with the Philadelphia District Attorney's Office. He earned his JD from Temple University Beasley School of Law, where he founded the First Gen Law Owls—an organization for students who are first in their family to attend law school.

#MyPathtoLaw is a guest column that celebrates the diversity of the legal profession through attorneys' first-person stories detailing their unique and inspiring trajectories.