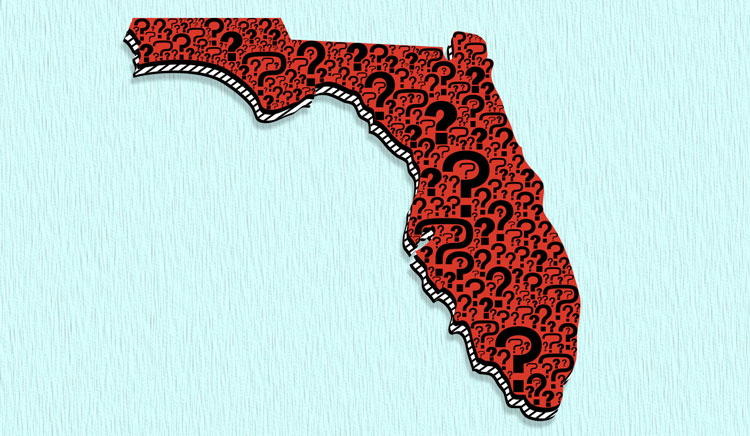 (Editor’s note: On Oct. 15, after the November issue of the ABA Journal went to press, the Florida Supreme Court granted the League of Women Voters’ request to stop Gov. Rick Scott from appointing justices before he leaves office. “The governor who is elected in the November 2018 general election has the sole authority to fill the vacancies,” the court wrote in its brief statement. The court also said Scott had no authority to set a deadline for the independent Florida Supreme Court Judicial Nominating Commission, and it scheduled oral arguments for Nov. 8 on when that commission may certify its nominations.)

When the sun rises over Florida on Jan. 8, 2019, three state supreme court justices—Fred Lewis, Barbara Pariente and Peggy Quince—are supposed to step down because of the state’s mandatory retirement law.

That same day, whoever is elected this November to replace Gov. Rick Scott will take office, which has led to a sticky question: Is it the outgoing governor or his successor who has the right to appoint replacements to the court?

The unusual circumstance prompted the League of Women Voters of Florida to petition the Florida Supreme Court last year for a writ stopping Scott from making the appointments. As a matter of law, they argued, Scott may not do so before there’s any vacancy.

But in early 2018, the court declined to step in, saying the case wasn’t ripe for review until Scott made any appointments.

In September, after Scott started the process of choosing nominees, the league again petitioned for a writ forbidding him from making appointments. That means a second court battle could be in Florida’s future—putting Florida’s highest court squarely in the middle of an overtly political fight that would leave it open to accusations of partisanship no matter how it rules.

Such a development would be another example of a growing trend toward the politicization of judicial appointments and elections, court watchers say. Though judicial appointments have always been somewhat political, Douglas Keith of the Brennan Center for Justice says judicial campaign spending for retention elections—an indicator of contentiousness in a previously sleepy category of elections—jumped substantially around 2009 and remains high.

“This is no longer individual races that you could name 20 years later,” says Keith, counsel in the democracy program at the Brennan Center, which is part of New York University School of Law. “This is something that we’re seeing across the country.”

Fights over who appoints judges are not unheard of in other states. In 2017, the Vermont Supreme Court ruled that former Gov. Peter Shumlin could not make an appointment to a seat coming open a full three months after he handed over the state to Gov. Phil Scott.

But appointments are a particular problem in Florida, where the state constitution requires jurists to retire when they reach 70. If that birthday occurs more than halfway through the term, the jurist may finish it. But terms end in early January, just like governorships—and that’s created years of clashes between governors.

In the past, those disputes were generally resolved through negotiations. In a press release, that’s what Scott said he expected to do when he asked the Florida Supreme Court Judicial Nominating Commission to certify nominees by Nov. 10.

But the League of Women Voters and co-petitioner Common Cause said in their Sept. 20 filing that Scott also “made clear that he will purport to unilaterally make the appointments if the governor-elect does not agree to grant him veto power over the appointments.” That’s true, they said, even though Scott’s counsel had conceded that Scott had no power to appoint judges to seats that will be vacant after his term is over.

Although the League of Women Voters and Common Cause are both officially nonpartisan, the succession dispute is very much about politics. Scott, a Republican who has condemned “activist judges,” has been aggressive about ensuring that people who share his beliefs become judges. Florida law requires the governor to choose from candidates put forth by judicial nominating commissions, whose membership is appointed by the governor. Four of the seats on each commission, though, must be filled by candidates suggested by the Florida Bar. Thanks to a 2001 change to the law, the governor may reject the bar’s list of nominees and ask for more until satisfied with the choices.

Scott’s two immediate predecessors never used that power, according to a 2013 article from the Tampa Bay Times. But according to the Florida Bar, Scott has done it 34 times, sometimes rejecting candidate lists more than once. This means the judicial candidates are chosen by people who share Scott’s politics.

So far, Florida’s highest court hasn’t had enough vacancies to be much affected. But the three judges scheduled to retire in January are all part of what’s seen as a 4-3 liberal majority. That means their replacements could shift the court rightward—something Floridians of both parties are very aware of.