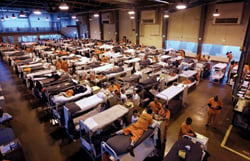 Cutting prison costs isn’t something you want to do without a firm sense of direction. And maybe the direction is geographical, not political.

“In deciding how to resolve correction’s impact on the budget crisis, the choice lies not be­tween left and right, but east and west,” says Malcolm C. Young, a visiting scholar at Northwestern Univer­sity School of Law’s Bluhm Legal Clinic in Chicago.

Young, author of a June report, Controlling Corrections Costs in Illinois: Lessons from the Coasts, is nudging policymakers to look east. In it he outlines strides made in New York, where, he says, a pragmatic and flexible approach has lowered corrections costs, and missteps in California, where adherence to punitive sentencing laws and a powerful corrections lobby keep both expenses and incarceration rates in an out-of-control spiral.

Crime rates are down in all three states: Between 1995 and 2007, violent and property crime rates in New York dropped by 51 percent and 47 percent, respectively; California saw a decrease of 46 percent and 38 percent; and the numbers in Illinois fell 46 percent and 34 percent.

But here’s where things take a sobering turn: During that same time, California’s prison population jumped 31 percent and Illinois saw an increase of 20 percent. New York, meanwhile, had a decline of 9 percent.

In August, a panel of federal judges ordered Cali­fornia to cut its prison population by about 27 percent within two years, saying the state failed to comply with previous orders to fix the system and reduce crowding. The state plans to appeal the decision in Coleman v. Schwarzenegger.

In the meantime, New York’s incarceration rates could continue to drop. A newly enacted reform of the state’s rigid “Rockefeller drug laws” will essentially scrap mandatory sentences for drug crimes and restore judicial discretion in many cases.

New York’s achievements, despite more lenient incarceration and sentencing practices, belie the popular belief that locking people up ensures public safety, Young says. The notion is simplistic and inaccurate, he says, noting, “If we could just break through that myth, we’re halfway there.”

According to Young, the numbers reflect a very basic premise that is embraced in New York: Many low-level offenders simply don’t need to be locked up. And a high percentage of inmates (national estimates generally range between 50 and 75 percent) report a history of substance abuse. Given those numbers, Young advocates an emphasis on drug treatment and rehabilitation, a path already well worn in New York.

Though Illinois is slamming the door shut on more inmates, following California’s trend, the state has many of the resources needed to replicate methods that have succeeded in New York, Young argues.

California’s determinate sentencing practices, initiated in the 1970s and cemented by the controversial three-strikes law in 1994, are clogging the state’s prisons. The law—the toughest in the nation aimed at habitual offend­­ers—generates a torrent of criticism because for some third-strikers the mandated sentence of 25 years to life is out of proportion to both the crime and the criminal.

Under the law, the first two strikes must be serious felonies, but the third can be any felony. Some third-strikers are serving decades and even life behind bars for stealing videotapes, umbrellas or cookies.

“With determinate sentencing, you can’t let some­-one out, no matter what,” Melnicoe says. “We’ve taken any decision-making out of our criminal justice system. We’re treating everybody the same, regardless of wheth­er they’ve been rehabilitated.”

Young—former executive director of both the John Howard Association of Illinois, a prison watchdog group in Chicago, and the Sentencing Project, a national corrections reform organization in Washington, D.C.—gives kudos to New York for placing emphasis on al­­­ternatives to incarceration programs, pretrial release of nonviolent defendants and rapid disposition of cases.

In essence, he believes many low-level drug cases should end before they begin. Rapid disposition of cases either before or during arraignment could liberate an overextended court system and free up jail space at the county level, he says. “What New York has done and what needs to be done in Illinois is intervene and keep people out of the system in the beginning,” Young says.

Policymakers in New York recognized more than 20 years ago the need to come up with practical solutions to burgeoning corrections costs, says Martin Horn of New York City, former city commissioner of both correction and probation. The state began reducing length of stay by allowing earlier parole of nonviolent offenders, and it invested heavily in alternatives to incarceration. Horn is co-chair of the Corrections and Sentencing Division of the ABA Criminal Justice Section and co-chair of its Corrections Committee.

“Only two things determine how many inmates are in prison or jail: How many come in and how long they stay,” Horn says. “Control one, or both, and you can control size and cost.” In New York, he notes, the threshold for determining who goes to prison is high. In California, the bar is set much lower. New York has also reduced the number of offenses for which imprisonment is mandatory, along with the length of sentences for certain drug offenses. “California has been unable to address this issue and three-strikes has them tied in knots,” he says.

Lance Corcoran, spokesman for the California Correctional Peace Officers Association, the state’s prison guards union, notes that “California already provides a proverbial get-out-of-jail-free card for many low-level offenders.” He says a 2006 report by the California State Sheriffs’ Association found more than 230,000 people either avoided incarceration or were released early the previous year. On average, he says, California offenders have five felony convictions before spending any time in state prison.

Young’s report lays out a game plan for Illinois aimed at thinning out the prison population and cutting costs. He calls for creating an office or tapping a senior administration official—a czar of sorts—to monitor the impact of criminal justice policy decisions, establishing a research agency to design and operate alternatives to incarceration, and implementing pretrial release before bond hearings.

Young wants to see Illinois reduce mandatory sentences, following the lead of New York in more inde­terminate sentencing that would include serving time outside of prison, credit for good behavior, and expanded work release and halfway house placements.

Melnicoe stresses that failing to provide essential resources for ex-offenders is short-term thinking that costs more in the long run. “What we forget is that most everyone comes out,” she says, “and when they do, we need to deal with them so they don’t recidivate.”

Budget cuts in California last year eliminated a successful statewide employment program for ex-offenders, a significant loss, she says, given that unemploy­ment puts parolees at higher risk of returning to prison. “Give them a chance,” she says. “Let them become responsible, tax-paying citizens.”

Horn, now a professor at John Jay College of Criminal Justice, agrees that employment is a key component in the re-entry process. “For persons recently released from prison and jail to succeed, they need to be sober, and have a job and a place to live,” he says. “Absent those things, they will fail.”

While some of the measures Young advocates are inexpensive, he concedes they may be a tough sell. He credits New York politicians for not being “driven into a frenzy to ratchet up punishments for almost any crime that hits the newspapers.” What Illinois needs most, he says, is the political will to move beyond tough-on-crime rhetoric. Horn concurs that New Yorkers have been able to depoliticize some of the debate, but cautions that it would be naive to think the climate couldn’t change if a spate of serious crimes were committed by people who had been released from custody.