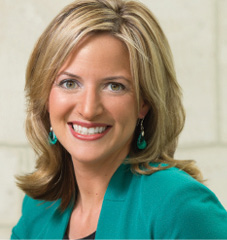 When Justice Ruth Bader Ginsburg weighs in on NFL quarterback Colin Kaepernick’s controversial kneeling during the national anthem, it’s clear the intersection of race and sports has become a flashpoint in the national discourse.

A former law dean will now be tackling these sorts of issues head on in her new role as CEO of the Ross Initiative in Sports for Equality.

“I was offered an incredible opportunity to lead a national campaign to improve race relations in America at a time when there are very clear divisions,” says Jocelyn Benson, who recently resigned after four years as dean of Wayne State University Law School in Detroit.

Benson brings a notable track record in law and social justice to the RISE leadership. She is the youngest woman in U.S. history to serve as dean of a top-100 accredited law school, was named one of Crain’s “100 Most Influential Women in Michigan,” and is one of the youngest women to be inducted into the Michigan Women’s Hall of Fame.

RISE was founded in 2015 by Wayne Law alum and Miami Dolphins owner Stephen M. Ross after a bullying scandal involving team players Richie Incognito and Jonathan Martin brought scrutiny on race relations in sports. Ross, who is also a real estate magnate and philanthropist, intends RISE to be an “alliance of sports leagues and associations, organizations, educators, thought-leaders, media networks, sports professionals, athletes, coaches and others who believe in the power of sport to build a society of understanding, respect and equality.” The organization works with major sports organizations, including the NBA, the NFL and the NCAA.

While Benson will continue to teach a course at Wayne State, she says she was ready to hand the position of dean over to someone new.

“I thought I had accomplished everything I had wanted as dean. I had seen my rankings increase, an increase in enrollment, an increase in caliber of students in the law school,” Benson says.

Now she is taking on new challenges. Among them are the implementation of RISE’s outreach goals and programming.

“On one hand, we work with professional athletes to provide them the resources and support that they need to improve race relations,” Benson explains, citing a recent meeting that the initiative helped moderate with the New York Giants. But RISE also is focused on early intervention, including “building leadership skills in young athletes.”

This article originally appeared in the December 2016 issue of the ABA Journal with this headline: “Former Law Dean Tackles Equality: Initiative works to foster better race relations in sports.”