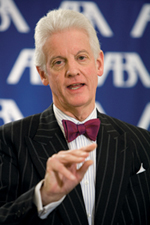 Within the next few weeks, the ABA’s World Justice Project will start test­ing its theories of what de­fines the rule of law by sending fact-gathering teams to four countries, including the United States.

This field work will be the proj­ects’s first effort to test the feasibility of the rule of law index, a key element of the World Justice Project. The purpose of the index is to measure in some factual way how effective countries are in adhering to the rule of law, at least in terms of meeting certain criteria.

In addition to the United States, Chile, India and Nigeria will take part in the field testing of the rule of law index, said ABA President William H. Neukom in a news conference held during the association’s midyear meeting in Los Angeles. The project is Neukom’s primary presidential initiative.

“We’re not in the ‘shame and blame game’ here,” said Neukom of Seattle. “We don’t have a carrot and stick. We’re just gathering the facts.”

Neukom said the World Justice Project welcomes any participation from governments in the country where the rule of law index is being tested, but he emphasized that the fact gathering will take place whether or not those governments cooperate. The field work will be conducted by the Vera Institute of Justice in New York City, which has conducted similar projects in the past and knows how to gather information even without active government assistance, he said.

“It’s a public exercise,” Neukom said. “The governments will be aware that we’re there.”

Neukom, a partner at Kirkpatrick and Lockhart Preston Gates Ellis, said the four countries were selected for the initial field testing because they are likely to provide a quick turnaround for the institute’s fact gathering, and they represent geographic diversity. He added that the project organizers felt the U.S. should be included in the process early on.

The World Justice Project is based on the premise that adherence to certain rule of law principles are necessary to a community that offers opportunity and equity to its members through free and fair government. The index is an attempt to give that premise a quantitative value based on characteristics that measure a country’s adherence to rule of law prin­ciples: accountable government, recognition of fundamental indi­vidual rights, and the adoption and enforcement of fair laws. The index identifies nearly 50 specific factors for measurement.

“It is a central belief of the project that where these conditions of law and justice exist, other benefits such as prosperity, safety, health and human dignity are more prevalent,” Neukom said.

GOING TO THE FORUM

Field testing in the first four countries will measure only some of the standards identified by the project so that the results can be re­ported and discussed at the World Justice Forum to be held in early July in Vienna, Austria.

A growing number of co-sponsors have signed on for the forum. The 11 confirmed groups so far include international as­sociations for public health, education, business and engineering.

That participation is crucial, said Neukom, because efforts to achieve the rule of law must be multidisciplinary. “It’s not the rule of lawyers,” he said. “It’s simply justice.”

The implications of a breakdown in the rule of law were apparent to the ABA House of Delegates at the midyear meeting when it adopted a recommendation by the New York State Bar Association that the ABA express “support for and solidarity with the Pakistani bar and bench,” which has been under fire from Pakistan’s president, Pervez Musharraf, since late last year.

In December, Neukom and other ABA officials led more than 700 lawyers in a march and vigil expressing support for Pakistani lawyers who were detained or put under house arrest by the government.

“Without the rule of law, Pakistan is destabilized, more vulnerable to terrorism, and its economy is suf­fering,” Neukom told the House. “Under these conditions, we are concerned about whether free and fair elections are possible.”