Getting What You Deserve 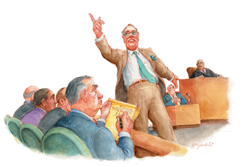 Spencer Reynolds, the famous plaintiffs lawyer, came to town to try the first case in a big class action, and a number of the local heavy hitters took time off to watch.

Vita-Pote, one of those food supplements they sell at health food stores, had some unfortunate side effects. A diet pill that was supposed to let you eat all you want and still lose weight, Vita-Pote turned out to have little, if any, effect on weight gain or loss. In­stead, it actually caused 20 percent of the men who took it to have temporary sexual impotence and serious mental depression for up to three months.

While Vita-Pote apparently didn’t cause any permanent physical damage, it certainly made a lot of men awfully worried about what was hap­pening to them until they found out the cause and stopped taking it.

The plaintiff’s case on liability was pretty solid. One of the herbal ingredients in Vita-Pote turned out to have a well-recognized association with temporary impotence.

When it developed that the defendant had never really investigated what the ingredients in Vita-Pote could do to men, the local legal pundits started saying there was no way the plaintiff could lose.

On the morning of final arguments, Angus and I decided it was time to join the gallery and watch the great Spencer Reynolds in action.

That afternoon in the Brief Bag, when the talk turned to how Reynolds would need a Brink’s truck for his fee, Angus just listened.

When Myra Hebert saw him, she said, “What’s the matter, Angus? Spencer make a few arguments you never thought of?”

Angus looked at her over the top of his glasses. “No,” he said. “I was watching the jury during final argument, and I’m afraid Mr. Reynolds is in trouble.”

“Aw, bishwah,” said Myra. “Just because Spencer told the jurors that $4.5 million for the plaintiff would be a verdict they could be proud of? That’s what he’s supposed to do—get every penny he can for his client.”

Lundquist ignored Myra and said, “Why do you say greed, Angus?”

“This is a serious case,” said Angus, “but it’s not a tragedy. Nobody died. Nobody was permanently injured. Nobody’s life was ruined. Even with the defendant’s obvious fault, a number of jurors looked shocked when Reynolds said $4.5 million.”

“Bishwah,” said Myra again. “There have been verdicts bigger than $4.5 million for less offensive injuries than this one.”

“Of course,” said Angus. “But the more you push the envelope of acceptability, the bigger the risk you run.”

RING UP A LOSS

Half an hour later, they turned on the big television in the Brief Bag, and a local reporter outside the court of common pleas announced that the jury had just returned a verdict for the defendant in the Vita-Pote case. She asked one of the jurors, who was walking down the courthouse steps, what he thought about the plaintiff’s claim.

The juror snorted. “That guy thought he won the lottery just because he was out of commission for 90 days. When he found out what his problem was, the first thing he did was go to his lawyer—not his doctor. Then he comes here and tries to tell us his sex life was worth $50,000 a day. No way. We didn’t buy what he was selling.”

There was a long silence in the Brief Bag, and some of the people looked at Angus and nodded. Then Dick Mudger, who does defense work for automobile insurance companies, said, “Well, it’s about time we had a little justice around here.”

“Is it justice when an honest claim gets tossed out because a greedy plaintiffs lawyer was looking for a $2 million fee?” said Regis McCormick.

“Sure it is,” said Dick. “When Reynolds told the jury to award $4.5 million, he was speaking for his client, not himself. A lot of the companies I represent tell me how to argue the case. It’s the client’s case—not the lawyer’s.”

“But you’ve got sophisticated clients,” said Regis. “If this plaintiff even agreed to the $4.5 million request, he was probably just going along with what Reynolds said.”

“Oh, I don’t know,” said Beth Golden. “A lot of unsophisticated clients insist that you ask for big money.”

“Do they ever say you are asking for too much?” said Andy Lundquist. “Once clients hear big numbers from their lawyers, they start planning how to spend the money.”

“Which is why you should always tell your clients not to expect to receive anything like your initial demand,” said Beth. “Otherwise, when they only get half that much, they may think they were sold out by their own lawyer.”

“One way or another, greed is everywhere,” said Dick.

“And whether it’s the client’s greed or the lawyer’s greed, an exaggerated claim—just like an unreasonable defense—is a powerfully destructive force,” said Angus. “It’s the lawyer’s job to help the client understand that. In fact, sometimes one of the most difficult jobs of persuasion can be trying to convince your own client to be reasonable.”

“It goes even deeper than obvious greed poison­ing the occasional case,” said Barbara Swanson, joining the group. “Americans think lawyers are as greedy as professional athletes. And they figure we charge so much that more than just our time is for sale—the price includes our integrity as well.”

“Which is why you have to earn your credibility in every case you try,” said Angus.

“What am I supposed to do to earn my credibility?” said Andy Lundquist. “Wear a blue suit and a striped tie? Get a sincere haircut? Buy a pair of big farmers’ suspenders like Clarence Darrow wore in the Scopes trial?”

“The best way to not look greedy is to not be greedy,” said Angus. “Just like the best way to look sincere is to be sincere. I really don’t think there is a list of specific rules of behavior for you to follow to look credible, but there are a few things that you should do to keep from sending the judge and jury the wrong message.

“Come to court prepared. Know the facts. Nothing undermines your credibility more than demonstrating that you literally do not know what you are talking about.

“Don’t sound like a lawyer. Stop using legalese. You want everything you say to command instant comprehension, which means you have to learn to talk like a real person again.

“Avoid making strident, pushy, abrasive arguments—especially in jury selection and opening statements. When you’re picking jurors, they’re picking a lawyer. If you sound like a street corner huckster, they are not going to think of you as the guide they can trust.

“Don’t be inconsistent. Whether or not your opponent calls you on it, inconsistent positions undercut the jury’s confidence in everything you have to say.

“Be polite to the judge, the jury, your opposing counsel—and especially the witnesses. Don’t look like you have to play unfair to win.”

“What do you do when you’re on the other side?” said Beth Golden. “How do you respond when your opponent is being piggy, grasping, overreaching?”

“The best advice I can give you is make sure the jury understands what the other side is doing, but don’t yell and scream and beat it to death.”

“Why not?” said Myra Hebert, who had slipped back into the group. “Works for me.”

“Paul Bardacke of Sutin Thayer & Browne in Albu­querque, N.M., has a great answer to that question,” said Angus. “He says you almost always want the jury to be angry with the other side—either for what they did that caused the problem or how they tried the case—or both. The jury wants wrongdoers punished.

“But if you punish the opponent yourself, the jurors don’t need to do it with their verdict—it’s already been done.

“That’s why the defendant’s final argument in the Vita-Pote case was so effective,” said Angus. “Right at the beginning, he mused—almost to himself—‘Four-and-a-half million dollars. Wonder how much that works out to per day. Oh, never mind.’

“Everything else he said focused on liability and the credibility of the plaintiff’s witnesses. That one comment on damages won the case.”

“Beautiful,” said Andy Lundquist. “The idea he kind of threw away guaranteed that some member of the jury would figure out that $4.5 million for 90 days is $50,000 a day—more than most of them make in a year.”

“And someone else probably said he couldn’t make $4.5 million in 90 years,” said Angus, “helping start a group rejection of the entire case. It became their idea instead of the lawyer’s—and people like their own ideas.”

The ABA Journal is occasionally reprinting some of Jim McElhaney’s most popular columns from past years. This article originally appeared in the Journal’s September 1999 issue under the headline “The Cost of Greed.”