Going for Gold in the Gulf 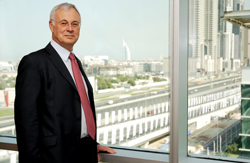 If there is an upside to the surge in oil prices, it just may be that lawyers are benefiting from it. In the last few years, scores of Western law firms have created the modern equivalent of a gold rush, hurrying to open branch offices in Dubai and other Persian Gulf cities to help the oil-rich residents spend their money.

In addition to oil wealth investments estimated in the trillions of dollars, the governing sheik of Dubai has been instrumental in changing laws to allow foreign investment there. He helped to create the Dubai Inter­na­tional Finance Centre, a free-trade zone that many compare to early Hong Kong, to further cultivate Western-style financial and economic development.

The combination has proved to be a boon for lawyers and law firms. “Dubai has succeeded very well in creating itself as a regional business center,” says lawyer David Church, who heads the Dubai office of DLA Piper. “Banks have come into the financial center. Businesses are establishing themselves there. Funds are being established. There is lots of infrastructure development. Professionals are coming in from around the world.”

And all of that requires lawyers. Lots of them, say Church and others who have helped lead the charge into Dubai.

By some estimates, nearly 30 Western firms have a presence in Dubai. While most are British, at least 11 U.S. firms and a handful of offshore firms from the Cayman Islands and Bermuda have opened offices there in the last few years, creating a fiercely competitive market for legal services.

“The total number of firms in Dubai is significant, but the amount of work being undertaken is the key driver,” says London consultant Guy Himsworth, who has studied the Persian Gulf legal market. “There is a lot more work, but competition is undoubtedly fierce because every time a firm opens up they are looking for new work. It’s an aggressively competitive market,” says Himsworth, director of Hildebrandt Strategic Intel­li­gence, the research arm of consulting firm Hildebrandt International.

Not surprisingly, several U.S. firms that recently have opened offices in Dubai have long-established energy practices. Among those is Fulbright & Jaworski, based in Houston, which recruited two partners from St. Louis-based Bryan Cave to establish its Dubai outpost in 2005 and expand its business in the region.

“Fulbright had done a lot of work in the Middle East representing a number of major families with project work and energy work,” says John Lonsberg, a Fulbright partner based in Riyadh, Saudi Arabia, who has worked in the region since 1979.

But Lonsberg says the firm’s new office in Dubai has helped it move beyond those sectors to include private client representation, project finance and real estate development.

While Dubai’s gross domestic product was around $46 billion in 2006, about 5 percent came from the oil industry, according to the Dubai government’s Depart­ment of Tourism and Commerce Marketing.

It’s little surprise then that Texas energy firms have moved in. In fact, Emirates Airlines recently began its second nonstop route to the U.S., adding Houston to New York City as a destination.

A NEW LINK IN THE GLOBAL CHAIN

But law firms with little or no connection to the oil and energy industry also have opened up offices in the region. Lawyers from those firms say Dubai has become such an important financial center in the new global economy that they cannot afford to ignore it.

“Any law firm that wants to position itself at the top of the legal market internationally for the coming generations needs to be in strong principal practice areas and markets. Dubai is one of those markets,” says Paul Harter, a London-based lawyer who is overseeing Gibson, Dunn & Crutcher’s re-entry into the Persian Gulf with an office slated to open late last year in Dubai.

In the 1990s, Gibson Dunn had offices in Riyadh and Jeddah, but closed them because “they were not growing or integral to what we are doing now,” says Harter.

Changes in the global economy are creating more work in the region for firms like Gibson Dunn. “If you go back a decade, all the excess liquidity in the market was invested in North America principally through banks in New York and London,” says Harter. But now, he adds, “there is a lot of transactional work in the region that has not historically been there.”

Similar reasoning prompted Atlanta-based King & Spalding to branch into Dubai last year. Firm chairman Robert Hays says the Dubai office was a natural way to expand its established Islamic finance and energy practices; but the firm found its presence in the Gulf generated other work, including private equity, real estate, and international arbitration and mediation groups.

DLA Piper saw many of its existing U.S. clients begin investing in Dubai and other Persian Gulf cities when regulatory changes began to encourage both inbound and outbound foreign investments. The firm followed them into the region.

“The flow of business and investment both ways is extraordinary,” says Church. He says the firm also has been using its presence there to gain a foothold in the booming real estate market, representing clients who are developing commercial and residential properties as well as hotels and other tourist destinations.

Lonsberg says Fulbright’s work in Dubai has opened more markets for the firm; clients use it as a stepping-off point to expand into other emerging markets in Africa, India, Kuwait and Iraq. 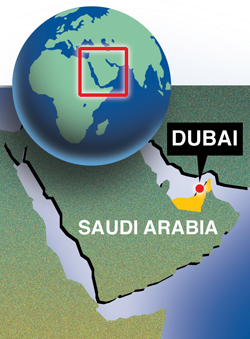 Despite the huge amount of revenues that Dubai is creating, with its legal population tripling in a decade the question arises whether the city can sustain all the lawyers. Himsworth thinks there is plenty of room. “Some people will say that Dubai is over-lawyered, but I don’t think that is true,” he says. “You have firms that have small offices there because they only want to establish relationships. You have others with big offices that are doing the work there.”

But all of the lawyers also are increasing competition for what is still a finite pot, and some say that may make it difficult for all the law firms to sustain themselves in a city where prime office space is going for a minimum of $115 per square foot.

Staffing also is an issue. Lawyers from American firms say privately that they are still finding some hesitation among attorneys when they are asked to go to Dubai. Though the city is not considered a hardship post, salaries are paid in dollars and the city is known as costly.

And, despite its glamorous image, Dubai is in the Middle East, where a cultural divide still exists. For example, Lonsberg says, client development in the Middle East can take years. Unlike in the United States, where a lawyer might be able to generate new business over dinner or a round of golf, personal relationships are critical in the Gulf region and they are not formed at just one pricey meal, he adds.

In addition, American lawyers have to be prepared for the possibility of instability, whether in the form of terrorism or wars or other uncertainties.