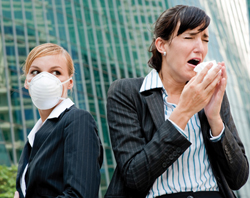 If you thought keeping your office swine-flu-free was all you needed to worry about this flu season, you may be headed for a rude awakening. Labor and employment attorneys are fielding an epidemic of questions from clients about how to best inoculate themselves against liability regarding their office policies about influenza.

When an employer suspects someone might have H1N1, tensions arise between regulations of the Occupational Safety and Health Administration and what one can ask of an employee under the Americans with Disabilities Act. That’s why Atlanta lawyer Bennet Alsher says erring on the side of keeping the workplace safe is the best bet. “That’s the overriding duty,” says Alsher of Ford & Harrison. “If they see someone who comes in and looks sweaty, they send them home and possibly pay them to stay home.”

When employees do call in sick or must stay home with sick children, employment attorneys urge flexibility. Otherwise, you may be sending an unintentional message to your workers and “inadvertently may force people to come to work and infect your entire workplace,” says Joan Gale of Seyfarth Shaw in Chicago.

The potential pandemic also may be reason to re-evaluate work options like telecommuting. For example, when an employee is on the mend but potentially still contagious, virtual workplace policies may make sense, says Rebecca Bernhard of Oppenheimer Wolff & Donnelly in Minneapolis. But those options also can give rise to a host of other issues, including computer security and tracking the time of nonexempt employees.

It’s definitely not mandatory to tell other employees when someone is sick, and it could be a violation of privacy in smaller workplaces, where it’s obvious who’s missing. Plus, sometimes people are misdiagnosed. “In at least a couple of cases, people have been shunned initially when they come back to work,” says Mark Lies of Seyfarth Shaw in Chicago.

Lies has heard of companies requiring employees to have their temperature taken by company nurses. The Equal Employment Opportunity Commission has “cast a negative eye” on this, Lies says. But “if H1N1 rises to the level of a direct threat, it would be permissible.” Such requirements are “very equivocal,” Lies says.

The only employer to try mandating vaccinations, the state of New York, faced legal action despite focusing only on health care workers. “There’s just too many legal impediments,” Gale says.