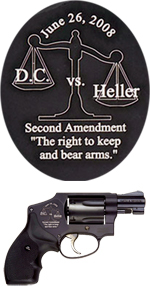 How do you commemorate a landmark Supreme Court decision upholding a private Second Amendment right to bear arms? With a handgun, of course.

Working with Smith & Wesson, the Second Amendment Foundation memorialized the victory for gun owners in District of Columbia v. Heller with a specially engraved S&W Model 442. The choice of the stylish and familiar-looking .38-caliber revolver was also intended as an insider’s poke at D.C. gun laws, which ban semi-automatics but permit revolvers, says Alan Gottlieb, founder of the Bellevue, Wash., group.

The foundation gave six of the revolvers to the Heller plaintiffs, but others are available for about $600 at licensed gun dealers nationwide. Proceeds from special-edition sales, Gottlieb says, will help fund additional gun-rights litigation.