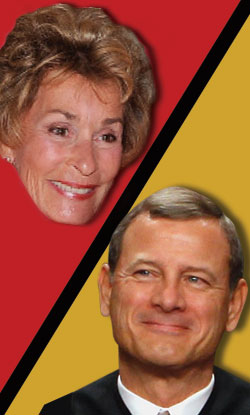 We liked the idea so much, we decided to start our own version. Complete this sentence in the comments below:

Times are tough for lawyers right now, but I am still grateful to be part of the profession because ...

75% of Americans see jury service as a civic duty rather than a burden, although only 27% have personally served on a jury.

81% of former jurors say the experience was a positive one.

“Judges and lawyers have traditionally not viewed themselves as having a central role in public education about law and government. We thought that other elements of society had ownership of that task. But the diminished capacity of some of these elements (especially the incredibly shrinking press), suggest that the profession must be more assertiveon this front.”

Judicial candidates in primaries spent more than $4.6 million in television advertisements this election cycle, according to NYU School of Law’s Brennan Center for Justice.

The number of people using voicemail is on the wane. According to a recent Vonage study prepared for USA Today, the number of messages being left on the VOIP provider’s voicemail accounts has fallen 8 percent over the last year. And the number of people retrieving messages from the system is down some 14 percent, proving that you are not the only one annoyed by the flashing red light on your phone.

Do you find voicemail annoying? Tell us in the comments below.