Hells Angels, Juggalos claim they are being unfairly singled out by law enforcement 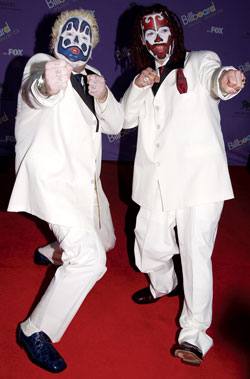 The Hells Angels are itching for a fight.

The group, which says it is a club for motorcycle enthusiasts, is ready to take on the U.S. government in a courtroom brawl. The problem? The U.S. State Department and the Department of Homeland Security have classified it as a “known criminal organization.”

Last summer the Hells Angels sued the U.S. government in a federal court in Washington, D.C. , saying that its foreign members have been unable to obtain U.S. visas because the government has classified the group as a criminal organization. Because of that designation, the government is infringing on its members’ “constitutional right to associate for the advancement of beliefs and ideas,” the complaint states.

The lawsuit raises some interesting points, says American University law professor Jamin Raskin. “Criminal designations attached to entire groups for all of time are on a collision course with the basic principles of due process and freedom of association.”

In the U.S. and abroad, Hells Angels members have been accused and convicted of a variety of crimes, including drug trafficking, assault and murder. But the group claims that the federal government is misinterpreting the Immigration and Nationality Act. Under the law, the group says visa applicants should be evaluated individually.

The Hells Angels aren’t alone in their frustration with the government’s view of an organization or its followers. In September, the Detroit-based rap-metal duo Insane Clown Posse sued the government over its classification of the group’s fans, “the Juggalos.”

Juggalos have a reputation for wearing face paint and listening to horror-themed rap music. In 2011 the Federal Bureau of Investigation, as part of its National Gang Assessment, identified the Juggalos as a “loosely organized hybrid gang.”

“Most crimes committed by Juggalos are sporadic, disorganized, individualistic, and often involve simple assault, personal drug use and possession, petty theft and vandalism,” the FBI stated in the assessment. “However, open-source reporting suggests that a small number of Juggalos are forming more organized subsets and engaging in more ganglike criminal activity.”

Insane Clown Posse’s lawsuit specifically asks the FBI for information about what prompted the agency to characterize its fans as part of a hybrid gang. In addition, Insane Clown Posse has a website for fans to report whether they have suffered any negative consequences with law enforcement for being Juggalos.

In Raskin’s view, the government—especially since the Sept. 11 attacks—has arguably overreached in its efforts to identify dangerous organizations and thwart their activities and expansion.

“Due process requires that we be punished only for things that we individually choose to do. The Anglo-American system of law rejects the concepts of collective guilt and guilt by association,” Raskin says.

“The more that we create lists of criminal groupings, the more we will see challenges by these groups to their designations.”