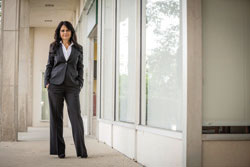 Corporate safety consultant Pam Paziotopoulos cautions employers against being lax about intimate partner violence at work. “Most companies have the attitude ‘It won’t happen to us,’ but it’s happened everywhere from hair salons to real estate offices.” Photo by Tim Klein.

On Dec. 14, 2012—the same day as the Sandy Hook Elementary School shooting—30-year-old Jessica Kenny was working the evening shift on the concierge desk at Excalibur, a Las Vegas casino, when her ex-boyfriend strode through the door, pulled out a gun and shot her to death. Police say he then killed himself.

In the aftermath of such a tragedy, questions naturally arise: Could the casino have prevented this? Could the real estate agency where Cindy Bischof worked have stopped her ex-boyfriend, a convicted domestic abuser, from murdering her in the company parking lot in 2008? Could the University of Washington’s workplace violence policy have provided more protection for Rebecca Griego, who in 2007 was shot to death at her desk by her ex-boyfriend?

For Pam Paziotopoulos, the answer to each is yes.

As senior vice president with corporate safety consultancy Forest Advisors, the former domestic violence prosecutor leads a team of industry experts who work with employers such as Chicago’s East Bank Club and NASA’s Mission Control in Houston to instruct, educate and implement whatever is necessary—from human relations policies to security measures—to safeguard employees against intimate partner violence at work.

“Most companies have the attitude ‘It won’t happen to us,’ but it’s happened everywhere from hair salons to real estate offices,” says Paziotopoulos, who is based in Lake Forest, lllinois. “Domestic abusers may not know where their victims live, but they do know one thing: where they work. They know what time you get there, what time you take your break. That’s how abuse moves to the workplace.”

The key to ensuring safety and reducing related costs, Paziotopoulos says, lies in creating an environment where employees feel comfortable coming forward with information—and where employers take appropriate action based on that information.

“It’s not enough to have policies. You have to breathe life into them—they can’t just sit on the shelf,” she says. While liability laws are evolving, “it comes down to: Are you providing a safe workplace environment? Was this situation foreseeable?”

Paziotopoulos has spent her entire legal career working in the arena of intimate partner and domestic violence, first prosecuting domestic violence cases for the Cook County State’s Attorney’s Office in Chicago, then creating the county’s first court division devoted to domestic violence litigation. There she institutionalized a more holistic approach to a 100,000-case-strong docket that prioritized supporting families over simply obtaining convictions.

She traveled to Albania to teach the country’s police force about domestic violence, conducted research for the National District Attorneys Association in 1996 that took her to 38 states to investigate domestic violence litigation strategy, and she co-authored a chapter titled “What Employers Can Do to Minimize the Impact of Domestic Violence and Stalking in the Workplace” in the 2008 American Bar Association book Preventing and Managing Workplace Violence: Legal and Strategic Guidelines. For the past five years, Paziotopoulos has taught a class at IIT Chicago-Kent College of Law on intimate partner violence and the law.

This wasn’t the career Paziotopoulos planned when she graduated from Chicago-Kent in 1990. Once she started prosecuting domestic violence cases, however, she knew she’d found her calling.

“I come from a very tight-knit Greek family,” she says, “and my parents’ house was always such a safe place, such a shelter, and when I realized that there were women who were afraid to go home because it meant prison, it meant abuse, I became really passionate about helping them.”

Although Paziotopoulos has never been a victim of domestic violence, she says she relates to those forced into survival situations because of her own struggles with cancer—stage 4 Hodgkin’s lymphoma in college and stage 2 breast cancer in 2011. Cancer, she says, has made her more appreciative of the value of time.

“I always want to make sure that I am doing what I love, that I’m doing the right thing,” she says, “and that I’ve done my job and made people safer.”

This article originally appeared in the September 2014 issue of the ABA Journal with this headline: “A Shield Against Attacks: Ex-prosecutor helps businesses keep employees safe from intimate partner violence on the job.”