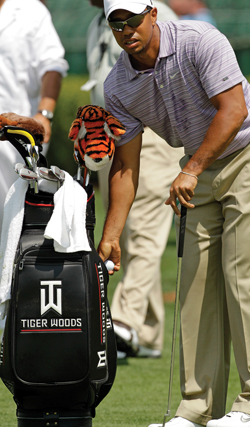 Tiger Woods was once the world's most marketable athlete, but after his fall from grace Nike has been left holding the bag. Photo: AP Images

After two juries failed to reach verdicts and a third took just five minutes to acquit him, silent film comedian Roscoe “Fatty” Arbuckle walked away from charges of raping and murdering a young actress during a 1921 party in a San Francisco hotel suite.

Hollywood nevertheless reacted swiftly to the public outcry the scandal triggered. To protect itself from embarrassment by the antics of high-priced talent, the film industry began inserting “morals clauses” in stars’ contracts. The nearly limitless, take-it-or-leave-it provisions allowed studios unfettered latitude to walk away from contracts for conduct that cast disrepute on the studio or industry.

Even studios untouched by the Arbuckle case or similar issues began cranking out boilerplate morals clauses. As Universal put it, the studio was both eager to “reassure the public” and “protect the company in an investment.”

Although golf star Tiger Woods wasn’t charged with a crime in the aftermath of his late November car wreck and revelations of his marital infidelity, the scandal could become the new Fatty Arbuckle case. Once again, corporate sponsors, celebrities—and everyone’s lawyers—are taking hard looks at morals clauses.

Morals clauses went largely unquestioned for decades, even during the McCarthy era, when studios used them to fire writers accused of being Communists. Nearly a century later, morals clauses have become ubiquitous in the sports and entertainment industries, as sponsors continue to use them to alter or sever relationships with errant celebrities they hire to hawk everything from breakfast cereal to razor blades.

Besides damaging his marriage, the crash and the women’s subsequent claims also endangered the lucrative product endorsements that dwarfed Woods’ golf income and made him the world’s first billion-dollar athlete.

Some sponsors, presumably acting under morals clauses in their deals with Woods, dumped him almost before the tow truck arrived at the crash scene, while others adopted a wait-and-see attitude. Fortunately for Woods, Nike and its $30 million payday stood by him, as it has other athletes gone bad.

Woods isn’t the first celebrity whose personal behavior has landed him crosswise with sponsors, and he’s unlikely to be the last. Others recently caught up in their own conduct and who paid varying prices for it include Los Angeles Lakers guard Kobe Bryant, charged in a rape case that was later dismissed; Philadelphia Eagles backup quarterback Michael Vick, convicted and sent to prison for running a dogfighting ring; British supermodel Kate Moss, caught snorting cocaine on camera; and Olympic swimmer Michael Phelps, also caught on film—hitting a marijuana bong. Nevertheless, Woods’ major-league cheating really scratched some raw nerves.

Early morals clauses essentially were non-negotiable adhesion terms that left celebrities no wiggle room. But they may have contained as much bark as bite.

“These clauses would be standard, but very little attention was paid to them,” says Bridgewater, N.J., practitioner Fernando M. Pinguelo. “Now I’m finding that they’re not only negotiated more but being drafted more carefully in favor of the company.”

Today negotiations over morals clauses can be just as tough as talks over provisions governing salaries, signing bonuses, illness, injury and more.

The first morals clauses covered the waterfront, such as this one from Universal Studios, where actors and actresses promised not to “do or commit anything tending to degrade him (her) in society or bring him (her) into public hatred, contempt, scorn or ridicule; or tending to shock, insult or offend the community or outrage public morals or decency; or tending to the prejudice of the Universal Film Manufacturing Co. or the motion picture industry.” Violations allowed Universal to tear up the contract on five days’ notice.

Sponsors still submit similar clauses today, yet celebrities now try to pare them back through negotiations. So for both sides, careful drafting is paramount because disputes are unlikely to end up in a courtroom, where discovery may publicly yield even more embarrassing information for everyone involved.

The presumption of innocent until proven guilty almost has been reversed, and sponsors almost assume something is going to happen,” says Cleveland lawyer Peter A. Carfagna, who represents athletes. “And what is disrepute? They want it to be in the eye of the beholder. And they want to be able to cancel the next day, without benefit of a court proceeding.”

The more specific the clause, practitioners say, the better off each side comes out. For example, a sponsor may insist on cancellation in the event of any arrest, while a celebrity may try to push the line back to, say, an indictment or conviction for a felony. Noncriminal conduct, such as marital infidelity, is an especially touchy issue.

“They don’t want to have to wait for the law,” McCann says. “They don’t have to have proof beyond a reasonable doubt. Their concern is bad publicity.”

A client with a clean image and record to match also may be able to push the morals envelope a little further with some sponsors. “Track record means a lot,” Carfagna says.

Now Woods faces the task of making himself marketable again. It can be done. Bryant did it, first coming back from the 2003 rape charge to win two scoring titles, the National Basketball Association’s most valuable player award in 2008, two MVP titles for league all-star games, and the MVP award for the 2009 and 2010 finals. He had lost some mega-sponsors, including Coca-Cola, McDonald’s and Nutella; though, as with Woods, Nike stood by him. But with Bryant’s stellar performance on the court, sponsors have started to return.

A similar formula could work for Woods, McCann says. “If Tiger wins tournaments, if he can preserve his marriage and still come out as being the best golfer of all time, he will go a long way toward rehabilitating himself,” McCann says. “But he’ll never be the same.”

The gallery enthusiastically greeted Woods with applause when he returned to golf in April at the Masters. But more than a few spectators probably were left scratching their heads when longtime sponsor Nike marked Woods’ return with a controversial commercial featuring a voiceover by his late father, Earl. It wasn’t exactly coy about Tiger’s problems.

Putting It in Reverse

Long before Tiger Woods or Ben Roethlisberger, there was Enron. Recalling that the Houston Astros had to pay $2.1 million to erase Enron’s name from their ballpark after the energy broker collapsed in scandal, two lawyers began suggesting a “reverse morals clause,” one that would allow an endorser certain rights if a sponsor’s actions cast itself in a negative light.

It’s probably an idea whose time will never come, acknowledges Porcher L. Taylor III, a lawyer who teaches business ethics at the University of Richmond. Taylor, with Fernando Pinguelo and Seton Hall law grad Timothy D. Cedrone, co-authored an article on such a role reversal, “The Reverse Morals Clause: The Unique Way to Save Talent’s Reputation and Money in a New Era of Corporate Crimes and Scandals,” which appeared this year in the Cardozo Arts & Entertainment Law Journal.

Taylor concedes that no sponsor ever would sign such a clause, and that it probably wouldn’t deter bad corporate behavior. Bailout beneficiary Citigroup paid $400 million for the right to affix its name for the next 20 years to the New York Mets’ new stadium in Queens.

Taylor figured Woods stood atop an extremely short list of stars who had the clout to pull off such a reverse-morals-clause deal. Now scandal has ruined that possibility, Taylor says.