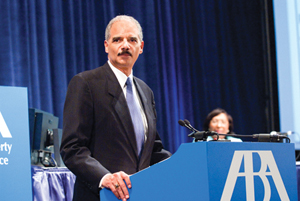 One of the most anticipated events of the 2009 ABA an­nual Meeting was the first speech to the House of Delegates by the Obama administration’s new attorney general, Eric H. Holder Jr.

Delegates, other ABA members and guests greeted him with warm applause at one of Chicago’s largest hotel ballrooms. In a succinct address, Holder laid out the administration’s plans to develop new strategies for dealing with crime in the United States.

Holder said he was relieved that his appearance interrupted a House debate on a matter of challenging substantive law. “I’m always wary in this administration that I’ll have to follow Barack Obama,” he said. “But patents? That’s OK.”

Holder made it clear that the new administration plans to break with recent ones in its efforts to deal with crime and incarceration on the federal level. Outlining the administration’s intention to build its policies on a solid foundation of science and data, Holder said, “We must be tough on crime, but we also must be smart on crime.”

A key aspect of changing strategies on crime, said Holder, is the need to address the nation’s growing prison population. He noted that one out of every 100 adult Ameri­cans is in prison—giving the U.S. the highest rate of incarceration in the world. Yet crime rates have stopped declining even as the prison population has continued to grow.

“Imprisonment alone is not a strategy for enforcing our nation’s criminal laws,” he said.

Holder identified five areas on which the administration’s crime policy will focus:

“We need to prevent the next crime before it occurs,” he said. “More­over, it’s just not economically feasible to keep putting more people in prison.”

• Making better use of fo­rensic science in criminal investigations.

Holder said President Obama has appointed a study group to look at crime issues in depth, and its report will serve as the basis for the administration’s proposals to Con­gress. “It’s time to move past politics and ideology,” Holder said, “and move forward to a criminal justice system that is fair and effective.”

Holder’s speech set the stage for easy passage by the House of a recommendation by the Section of Criminal Justice that the ABA endorse the enactment of federal legislation providing for a national study of the criminal justice system and ways to make it more effective. In Congress, Sen. Jim Webb, D-Va., has introduced the National Crim­inal Justice Commission Act (S. 714), which calls for the creation of a blue-ribbon commission that would look at all aspects of the criminal justice system.

• Endorsed federal legislation that would give every American access to quality health care. The recommendation by the Ohio State Bar Association and the ABA Section of Health Law does not, however, address the type of payer system that should be implemented under such legislation. The supporting report from the co-sponsors notes that the ABA has adopted similar policies three times since 1972.

• Called for wider use of mediation to resolve disputes relating to foreclosures of residential properties. The recommendation also says parties that would otherwise be unrepresented in a mediation should have access to counsel on a low-fee or pro bono basis. The primary sponsor was the Section of Dispute Resolution.

• Supported federal action to improve the regulation of financial institutions and markets in the United States. The recommendation’s lead sponsor, the ABA Task Force on Fi­nancial Markets Regulatory Reform, was created in October 2008 for the purpose of tracking regulatory issues relating to the current economic downturn.

• Urged Congress to repeal a provision in the Defense of Marriage Act of 1996 that denies federal benefits and protections to lawfully married same-sex spouses.

“This recommendation neither favors nor opposes civil marriage for same-sex couples,” states the supporting report. “It merely seeks to ensure that state decisions to recognize such marriages are respected, by restoring the deference traditionally accorded to state determinations of marital status for purposes of federal laws and programs.”

The lead sponsor of the measure was the Section of Individual Rights and Responsibilities.