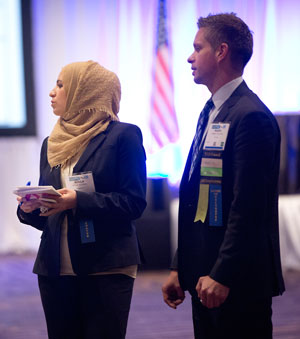 Votes on a measure to table Resolution 105 are counted. Photos By Earnie Grafton.

After extended and heated debate at the ABA Midyear Meeting in San Diego, the House of Delegates adopted a resolution to guide states in their regulation of nontraditional legal services.

Resolution 105 provides model objectives for state regulators considering how to supervise nontraditional legal service providers. These providers include online startup businesses and corporations, but also practitioners like the limited-license legal technicians recently authorized in Washington state. And the heart of the debate was over whether, by adopting the resolution, the House was endorsing the practice of law by nonlawyers.

The resolution was proposed by the Commission on the Future of Legal Services, a major project of the ABA’s immediate-past president, William Hubbard. Commission chair Judy Perry Martinez of New Orleans introduced it with a short speech noting that nontraditional legal services are now a significant economic force and are already providing services for people of modest means.

A long list of delegates filled out “salmon slips” seeking to speak on the resolution, but House chair Patricia Lee Refo limited debate to two speakers for and two against. Hubbard spoke in favor of the motion, giving a long list of ABA entities and outside legal organizations that support it. He cited statistics on the “justice gap” and told the audience that nonlawyer providers would continue regardless of what the House did.

“We’re not going to put the Internet back in a bottle,” Hubbard said. “Let’s stand up and lead.”

But opposition also came from many ABA and outside legal entities. Marjorie O’Connell, the ABA delegate from the National Conference of Women’s Bar Associations, said her members were “mad as anything” at the prospect of handing legitimacy to poorly trained practitioners, particularly since so many female lawyers have struggled to be taken seriously.

“We have no patience with the idea of a big corporation coming in and saying, ‘We can for $5 get you a lawyer and get you an answer,’ ” she said. “It’s not informed by an education, by adherence to professional standards.”

A voice vote on a motion to postpone the resolution indefinitely left Refo in doubt, so she asked delegates to stand and be counted. In the end, 276 delegates opposed postponing and 191 favored it.

The House then considered proposed amendments to the measure. The first was adopted easily, adding language saying that nothing in the resolution abrogates ABA policy on nonlawyer ownership of law firms or other core values.

The second was the subject of more debate. Sharon Stern Gerstman, a counsel at Magavern Magavern Grimm of Buffalo, New York, moved to urge regulators to require lawyer supervision of nonlawyers providing legal services; require that such practitioners be subject to rules of professional conduct; and require that such practitioners accurately state the scope of services provided. She phrased it as a matter of consumer protection.

Amendment supporter Marshall Wolf of Wolf and Akers in Cleveland said the Section of Family Law would support the resolution only with this amendment, and he noted that family attorneys were not represented on the commission despite family law taking up 50 percent of civil dockets.

But speakers against the amendment cautioned that it would have unintended consequences. Andrew Perlman, dean of Suffolk University Law School and vice-chair of the Commission on the Future of Legal Services, said it could regulate paralegals who are currently not regulated, as well as Washington’s limited-license legal technicians and various states’ courthouse navigator programs. Lucian Pera, a past ABA treasurer and partner at Adams and Reese in Memphis, said it would be “the work of months and years” to come up with appropriate model regulations. 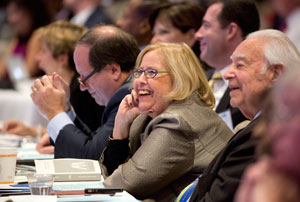 Delegates listen to the debate on Resolution 105 during the House of Delegates session.

The second amendment failed on a voice vote, though there was strong support. The resolution itself then proceeded to a voice vote. The ayes had it.

After Resolution 105 was adopted, ABA President Paulette Brown released a statement: “The adoption of Resolution 105 is intended to create a framework to guide the courts in the face of the burgeoning access-to-justice crisis and fast-paced change affecting the delivery of legal services. The ABA Model Regulatory Objectives for the Provision of Legal Services that was adopted provides for the protection of the public, the advancement of the rule of law, the independence of professional judgment, and diversity and inclusion among legal services providers, as well as freedom from discrimination for those receiving legal services. Moving forward, it allows the assessment of regulations that may develop concerning nontraditional legal service providers. The ABA recognizes the importance of evaluating the changes in delivery of legal services and the need for the ABA to carefully analyze these changes so that the public and the legal profession are protected and lawyers maintain the ability to serve their clients.”

ACTION ON THE UNIFORM BAR EXAM

In other action, law students seeking a more mobile practice got some encouragement when the House adopted two resolutions concerning the Uniform Bar Examination.

Over some opposition, the House adopted Resolution 109, which urges bar admission authorities to “adopt expeditiously” the UBE.

The UBE is a combination of the Multistate Bar Exam, the Multistate Essay Examination and the Multistate Performance Test, and it is coordinated by the National Conference of Bar Examiners. The resolution was sponsored by the ABA Law Student Division.

The House also approved the related Resolution 117, urging bar admission authorities to consider the UBE’s impact on minorities. It also asks bar admission groups to consider including subjects that are important in their jurisdictions—particularly Native American law, which is important in some regions but not covered by the UBE. Votes on a measure to table Resolution 105 are counted.

This article originally appeared in the April 2016 issue of the ABA Journal with this headline: “Guidance on Legal Services: House OKs objectives to regulate nontraditional providers.”