If you want to retain more women in law firms, ask women what they need 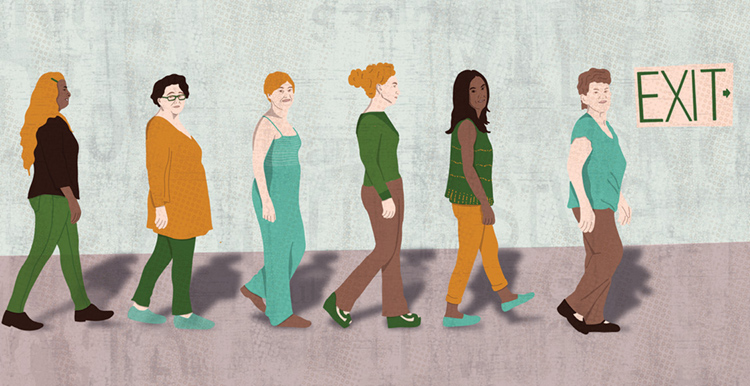 Why was that? It was a question I devoted a lot of time to exploring in my capacity as co-chair of the firm’s Women’s Network, which I did alongside my corporate client work.

Along the way, I listened to my female colleagues’ stories and felt I understood some of the root causes of the firm’s seeming inability to retain women equally and promote them to partnership. These same root causes are well documented in studies such as the ABA’s 2019 report Walking out the Door and its 2021 report In Their Own Words: Experienced Women Lawyers Explain Why They Are Leaving Their Law Firms and the Profession. These causes include high-level systemic structural and cultural problems as well as the everyday battles women are fighting while combating unequal access to opportunities, conscious and unconscious biases, and noninclusive workplaces. All have a cumulative effect on women and their career trajectories.

A few concrete examples: I knew of women who were told during their annual reviews they shouldn’t be so “obvious” about their ambition, reflecting a bias against something for which men aren’t accused or penalized. I also knew of all-male teams being appointed for industry conferences, which begged the question of whether women were even considered. I knew of client relationship-building events geared toward and attended primarily by male colleagues, which directly impacted which associates were later staffed on those clients’ (possibly high-profile) transactions.

That said, I felt the Women’s Network had made some progress, such as working to implement a new firm policy of using gender-neutral language (rather than “Dear Sirs”) and creating the Every Day Gender Equality Commitment, signed by more than 2,000 people across the firm who agreed to take 10 specified actions to confront and transform persistent problems.

Despite our perceived progress and after years of bearing witness as senior female colleagues left the firm—as if on cue—it took facing a block in my own career journey to truly understand.

Some law firms are losing women because they are not listening to the women. Want to retain women in law firms? Ask the women what they need. Listen to them. Act on it.

A short time into my maternity leave with my first child, Lily, I began feeling nervous about returning to work. For a decade, all I knew was a life in which I worked around the clock. It was not uncommon for me to get home from work at 9 p.m. only to receive another email from a client who needed something by morning. I loved what I did, felt grateful to have my job and worked extremely hard to get to where I was. I also felt inspired, believing that through my own career progression in a male-dominated field, I was lifting up other women with me.

Nothing can prepare you for the transformation that is motherhood. It changes you fundamentally and in ways you could not anticipate. My pre-baby professional life was not going to work for me post-baby. Organizations seem to expect you to remain unchanged, even in the U.K.—where I have worked since graduating from Cornell Law School—a country with some of the longest maternity leave allowances in the world.

I strategized how to reconcile my dual priorities of work and motherhood. After extensive reflection and research, I submitted a proposal to work fixed hours—closer to a traditional 9 a.m. to 5 p.m.—upon my return from maternity leave. I outlined how the arrangement would work in practice with transparency with clients, good teamwork and communication internally. I was also, of course, willing to take a commensurate pay cut.

I felt confident in my proposal, given my consistently strong performance and the firm’s stated commitments to women and diversity. I also felt emboldened, having come to see that the skills I was strengthening through motherhood—judgment, flexibility, risk mitigation, composure and solution-finding, to name only a few—were directly transferable to my career.

When the firm rejected my request, I was saddened, surprised and angry. I was told that working fixed hours was incompatible with client-facing transactional work, and the team would be both unable to meet client demand and was unable to reorganize work within the team. The firm said I would have “no value” if I were to work fixed hours. I was told no one had ever done it before. I was told it was impossible. Everything was impossible until somebody did it.

I tried to keep an open mind when the partners in my team, both men, offered two alternative suggestions that “could potentially be accommodated” (a four-day week or reduced overall workload). I had already been warned against these ideas by women who tried them and failed. Through additional conversations, career coaching and soul-searching, I tried to come up with another proposal, but I couldn’t.

I carried the hurt like grief. My career had always meant so much to me. Now what? Resigning and setting out on a new path as in-house counsel felt like my only option. I became a statistic, joining all the other women who also felt they had no choice but to leave their law firms. My story is my own, but it is also the story of women you will never hear.

And now, with the perspective gained from time and experience in my new role on the corporate legal team at a global media company, I ask: Are we willing to keep making progress only at the edges, moving the needle so faintly year after year without addressing what is really going on? When presented with a choice, will law firms continue to preserve their business model and the status quo at the expense of losing women, along with their talents and unique perspectives?

I will not accept that in 2022, we do not have the collective capability to come up with a new model of working. Should we just throw up our hands and say it’s too hard? We are lawyers! One of our primary roles is to solve problems. If clients came to us with this problem, would we tell them it is impossible?

This story was originally published in the February-March 2022 issue of the ABA Journal under the headline: “‘Ask the Women’: If you want to retain more women in law firms, find out what they need.”

Megan Elizabeth Gray is a lawyer and writer. She is corporate counsel at Condé Nast in London, where she has lived since graduating from Cornell Law School. Last year, she published Enjoy Your Life: Thoughts for Awakened Daughters from Conscious Mothers, which is her first book.

This column originally appeared on ABAJournal.com on Sept. 8. It reflects the opinions of the author and not necessarily the views of the ABA Journal—or the American Bar Association.