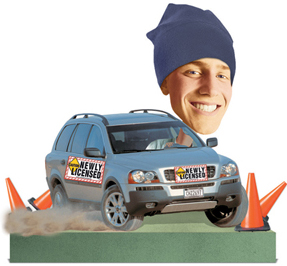 Whether you consider the biological urge to reproduce to be a blessing or a curse, the end result is a 21-year test of your patience, sanity and endurance that cannot be equaled by anything else you will ever experience.

And though you will always try to do right by your precious progeny, they will always find a way to make you regret it. This is written in stone.

Nancy Garrity of Wayne, N.J., was making lunch in 2006 for her son John, who was busy installing hardwood floors in her home. He was using a noisy power saw, so instead of shouting she tapped him on the shoulder to tell him lunch was ready.

Considerate, right? Well, John said that tap caused him to turn around, which in turn placed his hand in the path of the saw blade, severing a finger. He sued Mom in 2007 in state superior court, and in June a jury awarded him about $115,000. It would probably be crass to say he literally and figuratively gave Mom the finger, so let’s not go there.

A Kennesaw, Ga., mom cares so much about her 16-year-old son that when he drives the family car she insists he affix a large, magnetic sign on the back that reads, “Caution—Newly Licensed.”

Susie Kessler—who told the Atlanta Journal-Constitution that as a high schooler she railed against seatbelts be­cause they would wrinkle her clothes­—is working with a Georgia state senator to introduce a bill mandating the use of such signs by young drivers.

Does her son, Donne, welcome the opportunity to sport evidence of his newbieness and lower his cool factor to near zero? Brace yourself, but no. Instead, he actually seems to lament Mom’s good intentions.

“Why does she have to take on this?” Mom quoted him as saying. “Couldn’t she be feeding the homeless?”

They’re so cute until they learn to talk.

Which brings us to infants, some of whom, apparently, had the nerve to be born with unexpected chro­mosomes, according to papers filed this summer in Manhattan Supreme Court.

A group of New York moms filed a class action lawsuit against Acu-Gen Bio­lab of Lowell, Mass., the maker of a baby gender predictor kit. Acu-Gen prom­ises a 200 percent refund if the kit’s test result is inaccurate. The plaintiffs are seeking refunds and other unspecified damages.

Anyway, these moms just wanted to be able to love the stuffin’s out of their little ones, but in a gender-appropriate way. So when ultrasounds later revealed that the little darlings were sporting the “wrong” plumbing, well, how dare they?

Nurseries and clothing became instantly unusable, what with little George having to be rechristened Georgina, and vice versa. And one couple was so traumatized by the gender switcheroo that they went their separate ways, according to the suit. It seems Dad couldn’t envision teaching his little girl how to throw a curveball, after she threw him one prenatally.

It’s almost enough to make you forgo the wine, dim lights and Sinatra, and opt for a cold shower instead.