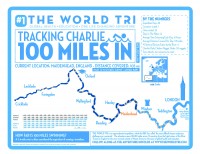 By the time you read this, Iowa lawyer Charlie Wittmack plans to have swum the English Channel, biked thousands of miles through Europe and traveled most of the way to Asia.

And that’s just the beginning.

For 11 months Wittmack intends to “pond, pedal and peak” some 12,000 miles in 12 different countries as part of a very public personal adventure. Wittmack started the World Tri intercontinental triathlon in late June and plans to finish it next June at the top of Mount Everest.

Wittmack conceived the World Tri as a way to bring attention to global health and education. During his adventure he will hold a conference providing medical training for doctors and midwives in Nepal and also will make programming available for schools.

“The physical feat itself is going to be something extraordinary,” he says. “Nothing like it has been done. But we’re really using it as a platform for important causes, like reducing maternal mortality rates around the world.”

Wittmack has been an adventurer all his life. As a teenager he climbed Mount Kenya and explored the Indian Ocean while traveling through Africa. While on those treks he realized that people across the world aren’t really that different. “They’re just disconnected,” he says. “I stopped thinking of these trips as adventures and started thinking of them as tools.”

The World Tri is a way for Wittmack to make those connections.

Wittmack has taken a yearlong sabbatical from the Des Moines firm of Davis, Brown, Koehn, Shors & Roberts to work on the World Tri. He has a 40-person team working behind the scenes. Sponsors have helped fund the estimated $650,000 budget, which allowed Wittmack to focus on training. His grueling schedule included daily five-hour workouts mixing swimming, biking and running. Evenings included weightlifting or yoga. On the weekends Wittmack did a six-hour swim, though he allowed himself one day off a week.

Wittmack sees the World Tri as his chance to make a difference. He hopes the same skills that have helped him become a tenacious litigator will help him find a path through uncharted waters.

It’s a good thing he’s used to swimming with sharks.