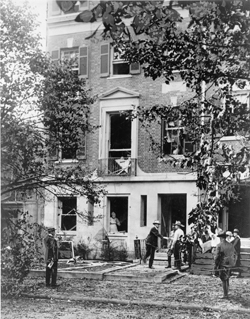 The attorney general’s Dupont Circle home was only one damaged in multicity bomb attack on officials deemed hostile to organized labor. Photo by New York World-Telegram and the Sun Newspaper Photograph Collection (Library of Congress).

At the end of World War I, anxiety in Europe and the U.S. over an emerging Bolshevik government in Russia all but overshadowed Allied victory. Known in America as the Red Scare, this fear of world communism often expressed itself as xenophobia, racism and the suppression of organized labor. In the public mind, decades of violent confrontation between labor and business interests conflated the highly diverse influences of anarchism, nihilism, socialism and communism, making them seem on the verge of overthrowing the U.S. government.

On the night of June 2, 1919, bombs erupted in seven cities—all within a 90-minute time frame—striking the homes of judges and other officials deemed hostile to organized labor. One of the targets was U.S. Attorney General A. Mitchell Palmer, whose Washington, D.C., residence was ripped by dynamite and shrapnel as his family slept. Although Palmer's family was unharmed, pieces of the bomb—and the bomber—damaged doors and windows in the neighborhood. A Quaker and a Progressive Democrat, Palmer earned a pro-labor record in Congress. But by the time of his recess appointment by President Woodrow Wilson, his anti-communist zeal had taken the form of undisguised nativism.

Photo of Attorney General A. Mitchell Palmer by New York World-Telegram and the Sun Newspaper Photograph Collection (Library of Congress).

Palmer urged deportation of foreign radicals and staged a series of unsuccessful raids aimed at Russian immigrant labor groups. With only tepid support in the courts, Palmer upgraded an intelligence unit inside the Justice Department and appointed 24-year-old J. Edgar Hoover to run it. And by fall—as strikes affecting the steel, coal and railroad industries, and even the Boston police, exacerbated anti-immigrant fervor—Hoover had gathered dossiers on 60,000 potential deportees. On Nov. 7, federal agents swept through more than a dozen cities, arresting over 1,000 immigrants, mainly Russian. But reports of warrantless searches and indiscriminate violence tempered public regard for the results. By December, the number of actual deportees dwindled to a few hundred, among them anarchist firebrand Emma Goldman.

On Jan. 2, 1920, Hoover's agents swept through 33 cities in a spectacular show of force, targeting two Russian labor organizations and arresting more than 3,000 labor activists. Twelve prominent lawyers denounced the raids as "utterly illegal acts" whose warrantless arrests, police violence and widespread property destruction "brought the name of our country into disrepute." That same month, the American Civil Liberties Union was established and began defending the targets of the raids. Nearly all the resulting arrests were voided.

At the height of the Red Scare, Palmer—at the urging of Hoover—predicted an armed revolution would begin on May 1. When May Day passed without incident, Palmer was left a laughingstock, and his once legitimate presidential ambitions were consigned to the margins of American politics.