Judge's movie night brings the court and the public closer together 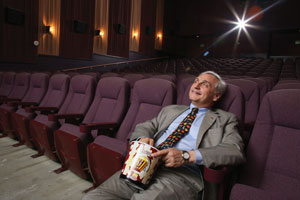 More than 20 years ago, 9th U.S. Circuit Court of Appeals Judge Alex Kozinski realized his clerks had a troubling gap in their education: They hadn't seen 12 Angry Men. Wanting to rectify the situation, Kozinski started showing classic movies in the courthouse law library.

That screening was the start of what is now known as Kozinski’s Favorite Flicks, a monthly movie night that moves between the 9th Circuit’s main courthouse in San Francisco and its Pasadena courthouse, where Kozinski’s chambers are located. Movies are not always related to the law; picks for this summer include The Paper Chase and Tim’s Vermeer, a documentary about the Dutch master’s painting techniques.

These days, KFF draws more than 100 people. It includes an optional dinner—a $10 buy-in gets visitors pizza, drinks and a well-regarded salad made by Kozinski’s longtime assistant, Donna Salter. A movie poster is given away as a door prize. Tours of the hosting courthouse are offered before the movie.

And in a move that might not be possible outside the 9th Circuit, an actor or some other person connected to the movie often speaks. This started when Jeremy Ray Valdez, the son of Judge Michael Daly Hawkins’ assistant, starred in La Mission. Hawkins suggested a showing with a talk by Valdez afterward, and the talk was a big success, Kozinski says. Since then the speakers have included known actors, a studio head and—at the 9th Circuit’s 2014 judicial conference—Clint Eastwood.

After the initial success of the movie nights, Kozinski says, it occurred to him that it would be nice to throw it open to a broader community. So he started inviting attorneys, jurors, law students and judges from all over the federal and California systems. Kozinski says it’s a conscious effort to reach out to the wider community.

“Unlike the district courts, unlike the [California] Superior Court [system], we don’t get a lot of traffic,” he says. “People view us as a cold and distant place. I think it’s important for people to feel that this is their courthouse and the judges here are just like everybody else.”

This article originally appeared in the August 2015 issue of the ABA Journal with this headline: “The Court of Appeals for the Hollywood Circuit: Judge’s movie night brings the court and the public closer together.”