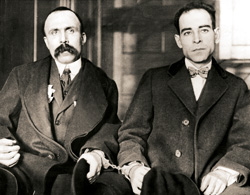 The trial of Italian anarchists Nicola Sacco and Bartolomeo Vanzetti, charged with the robbery and murder of a paymaster and his guard in April 1920, initially drew little attention. As one wag put it: “There’s no story in it … just a couple of Wops in a jam.” But in the years between their capital convictions in July 1921 and sentencing in April 1927, the case went from the margins to the mainstream, eventually becoming an international cause célèbre.

Judge Webster Thayer, who had vowed before the trial to ensure the defendants “got what they deserved,” repeatedly dismissed defense motions for a retrial, even after another convicted murderer came forth with a confession that arguably merited consideration. In a withering critique of the trial and subsequent proceedings in The Atlantic Monthly, future justice Felix Frankfurter argued that with Thayer’s connivance, the DA had exploited the postwar Red Scare and jurors’ nativist impulses, thereby invoking a “riot of political passion and patriotic sentiment” that all but precluded a fair trial.

Frankfurter’s intervention and countless pleas from the likes of Albert Einstein, Thomas Mann and Jane Addams went unheeded, and on Aug. 23, 1927, Sacco and Vanzetti were executed amid mass protests at home and abroad.