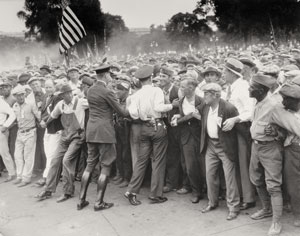 As the Great War ended, veterans returned home to find an America that seemed unprepared for them. Fueled by the labor of those who had stayed behind, including women and children, industry had flourished in their absence. Even organized labor—capitalizing on the shortage of workers—squeezed higher wages and benefits from the Wilson wartime administration. Still, many returning veterans found themselves marginalized and ignored in the roar of the ’20s.

In 1924, under pressure from veterans organizations to provide some compensation, Congress passed the World War Adjusted Compensation Act, known as the Bonus Act because it delivered a “bonus” to wartime veterans—roughly $1 for each day of service and $1.25 for days spent “over there.” Like President Warren G. Harding, who had vetoed similar legislation two years earlier, President Calvin Coolidge vetoed the Bonus Act, adding an acid assessment: “Patriotism … bought and paid for is not patriotism.”

The Bonus Act became law when Congress overrode his veto, but its provisions were still less than ideal. Most veterans would not receive cash but instead government-backed certificates that wouldn’t mature until 1945. And as the national economy lapsed into the Great Depression, veterans began to plead with Congress to authorize an earlier payout to help preserve their homes and farms.

In May 1932, a modest call to action in Washington, D.C., by a group of veterans from Oregon swelled to an angry migration. Over the next few months, thousands of veterans descended upon the city, settling in a makeshift town of tents and shacks on the banks of the Anacostia River. As the camp grew, the veterans organized, electing officers and vetting newcomers to ensure they were veterans, creating the so-called Bonus Expeditionary Force to lobby and march.

In June, despite intense pressures, the Senate voted down an early bonus payout. And as the legislature prepared to adjourn, local demands to disperse the force, aka the Bonus Army, began to grow. On July 28, two veterans were shot and killed by local police attempting to evict them from a condemned building. Seizing the moment, Army Chief of Staff Douglas MacArthur mustered a small army of troops on the grounds behind the White House.

Having convinced himself that the veterans were intent on insurrection, MacArthur ignored both the advice of his junior officers and orders from President Herbert Hoover not to enter the camps. With a squadron of cavalry, machine gun units, six tanks and a battalion of soldiers, MacArthur advanced across the river where his soldiers—armed with live rounds, bayonets and noxious gases—routed the defenseless veterans and set fire to Bonus City. Dwight Eisenhower, a MacArthur aide, later spoke bitterly of the shameless assault. “I told that dumb son-of-a-bitch he had no business going down there. I told him it was no place for the chief of staff.”

Memory of the Bonus March attacks, still fresh when a new generation of veterans returned from World War II, aided passage of the Servicemen’s Readjustment Act. More commonly known as the GI Bill, it was signed into law by Roosevelt in 1944.