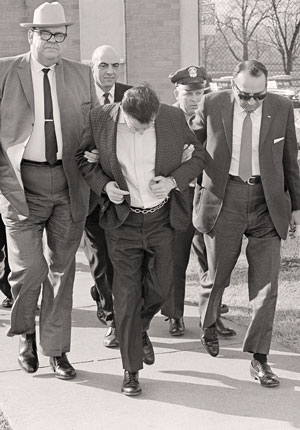 Shortly before noon on June 8, 1968, a British policeman stood at the passport desk at London's Heathrow Airport. Before him was an ordinary-looking middle-aged man in horn-rimmed glasses and a beige topcoat. His passport, issued by the Canadian embassy in Lisbon, said his name was Ramon George Sneyd.

The man said he was heading to Brussels, and his passport seemed in order. But when the officer checked the passport watch list, it revealed that Scotland Yard was looking for an American prison escapee traveling under the name Sneyd. A quick pat-down revealed a loaded Japanese revolver in his pocket.

The Brussels-bound traveler turned out to be James Earl Ray, a career criminal matching the description of a man seen fleeing a Memphis boardinghouse moments after the April 4 assassination of Dr. Martin Luther King Jr.

For 65 days King’s killer had eluded an international manhunt, forging an escape marked by constant movement, multiple aliases, lax immigration laws and plain dumb luck. In Brussels he had hoped to find passage to South Africa, Rhodesia or some other white-ruled African nation where he imagined he could claim sanctuary. 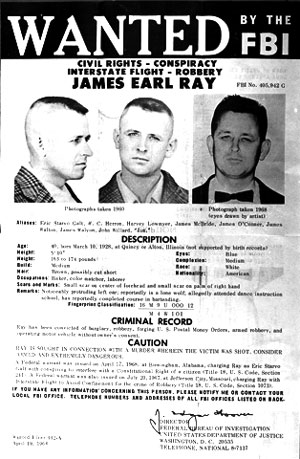 To a nation numbed by the shooting just two days earlier of Robert F. Kennedy, Ray’s capture seemed woefully anticlimactic. National attention was still focused in disbelief on the mysteries surrounding Kennedy’s assassin, Sirhan Sirhan. But any relief brought by the detention of both assassins was soon subsumed by the puzzling details of Ray’s meanderings before and after King’s death.

In April 1967, Ray had escaped from prison in Missouri, where he was serving 20 years for a string of supermarket robberies, by slipping into a box on a baker’s truck. He crisscrossed state lines and international borders, moving from California to Alabama and Canada to Mexico, flophouse to flophouse at a dizzying pace. He had money, as much as $30,000, most likely from an unsolved bank robbery in his hometown of Alton, Illinois. Posing as Eric Starvo Galt he moved to Mexico, where he tried unsuccessfully to establish himself as a porn film director. Ever the dreamer, he re-entered the U.S. in November and settled in Los Angeles, where he got a nose job, signed up for dance lessons and graduated from bartending school.

Though a garden-variety racist, rumors of a $50,000 bounty on King may have spurred Ray’s intense interest. For whatever reason, he resettled in Atlanta in March 1968 and began tracking the civil rights leader. He bought a rifle in Birmingham as Harvey Lowmeyer and journeyed to Memphis on April 2, eventually landing—as John Willard—in room 5B of Bessie Brewer’s boardinghouse, within clear sight of King’s lodgings, the Lorraine Motel.

Ray’s activities after the shooting were peripatetic. He dumped his rifle and a bag of belongings and sped back to Atlanta, then north by bus to Canada where, as Paul Bridgeman, he easily obtained a Canadian passport identifying him as “Sneya.” When fingerprints revealed him to be Ray, he fled to London and then Lisbon, where he got a passport from the Canadian embassy that corrected the misspelling of Sneyd.

Ray’s capture in London ended the manhunt, but not the mystery. Even as he pleaded guilty to the shooting in March 1969, Ray began to backpedal on details he’d revealed to investigators, alleging he was duped by a man he could identify only as “Raoul.” Until his death in prison at age 70, Ray spent his life declaiming in courtrooms and congressional hearings the odious act that defined his unhinged criminal past.