10 Questions: This legal team brings a wild approach to their practice

In early May, a crowd rallied at an Overland Park, Kansas, veterinary clinic to raise awareness of animal abuse. They also were there to celebrate the discharge of a plucky pit bull named Laggie who had been shot in the head and left to die.

A search for the shooter is now underway, and when police apprehend that person, they will have to answer to the authorities and to Tarzan. Or, rather, Tarzan the Lawman, the nickname of Kansas City litigator Tristen J. Woods.

Woods and his law partner (and fiancee) Lauren Sierra Kruskall founded the Jungle Law Group in January with the intent to advocate for animals in civil and criminal court, including Laggie (and her new foster family).

The duo also handles human cases such as trafficcitations and car crashes—advertised through eye-catching billboards and TV commercials that have featured a loincloth-clad Woods and a fur-bikinied Kruskall swinging on vines, riding a tiger and holding a sloth.

Yes, they have backgrounds in the entertainment industry—she’s a former actress, model and professional NFL cheerleader; he’s had a recurring role on a daytime soap opera. Yes, they really practice law. And, yes, a reality show is in the works.

Tristen and Lauren, you moved to Kansas City—Tristen’s hometown—from Florida in January to open Jungle Law Group. Before you arrived, you launched billboards to announce you were “swinging into Kansas City,” and you’ve aired several commercials since then. Your ads are fun, but are they working? How’s business?

Tristen J. Woods: We opened in January, and it’s been crazy. We knew we’d be busy; we just didn’t think it would happen this quickly.

Lauren Sierra Kruskall: We had clients coming in, and our computers weren’t even up and running. They were all coming in from our billboards and the commercials. 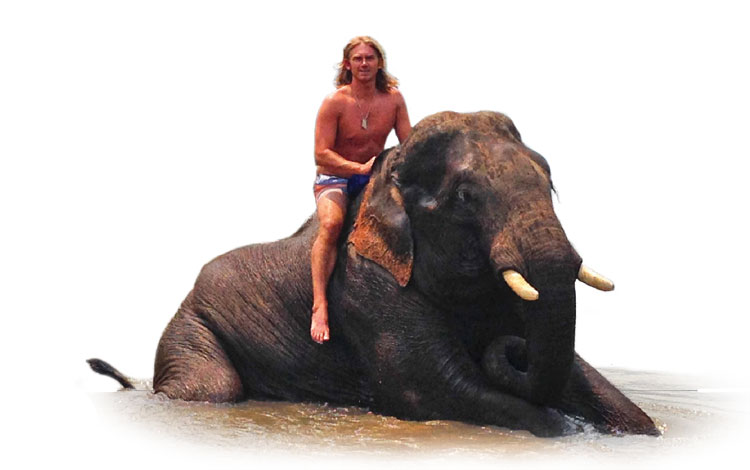 Tristen Woods: “Lawyers don’t have to be boring. We can be interactive. We can be social.” Photograph courtesy of Jungle Law Group.

I have to ask: Did the firm get a lot of crank calls in the beginning?

TW: We got a lot of crank calls.

You guys are huge animal lovers, and from the start, you knew that you wanted to create a firm that blended animal advocacy with civil and criminal work for humans. Tell me about that decision.

TW: I’ve been practicing law for several years, and I also have an LLM degree in human rights. I wanted to translate that into animal rights law.

LK: We’ve always done pro bono work with animals. At first, we thought the animal aspect of our firm would just be advertising and continued volunteering, but it has naturally evolved into an area of our legal practice. As attorneys we are advocates, so we are especially thrilled to provide a voice for animals—who often don’t get one.

TW: Yes, that’s exactly what we do—abuse, neglect and negligence. We also want to work on legislation affecting animals. I am working with a Missouri legislator to get the charge of animal abuse recognized as a felony. We also want an animal cruelty registry in Missouri. It’s similar to a sex offender list—you go on it for two years with your name and the specifications of the crime—and it can help prevent an abuser from adopting. In the case of Laggie, our client is the family who adopted him. Once they find the alleged shooter, we’re going to help with the criminal case and try to recover damages in a civil case.

This article was published in the July 2018 ABA Journal magazine with the title "Law of the Jungle: Inspired by Tarzan and Jane, this legal team brings a wild approach to their practice."