Just for Kicks: This New York City lawyer turned his sneaker obsession into a practice niche 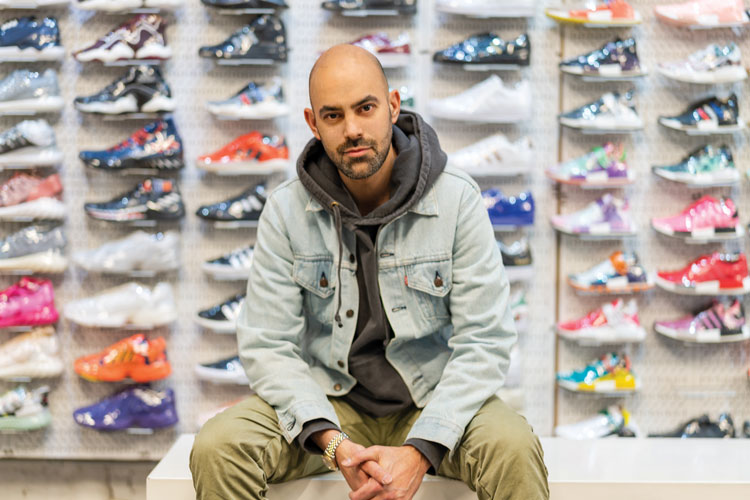 As a teenager in New Jersey in the early 1990s, Kenneth Anand was obsessed with sneakers. Every evening, as he cleaned his treasured Air Jordans with a toothbrush, he’d dream of the day when he could be as fresh dressed as his hip-hop heroes.

Anand went on to achieve that dream—and much, much more. Today, this New York City-based lawyer not only rocks the latest kicks, he stands at the forefront of sneaker-related law, entrepreneurship and investment in both the physical world and the metaverse.

Anand is even bringing his sneaker experience to the classroom. The award-winning self-published textbook he co-authored in 2020, Sneaker Law: All You Need to Know about the Sneaker Business, has been adopted by Harvard Law School, Parsons School of Design and others, and he is currently an adjunct faculty member at the University of Miami School of Law.

Q. I totally get your love of hip-hop, sneakers and streetwear culture. But I have to ask, why law school?

A. I always had a burning desire to help creative people. I grew up in a household with creative people—my grandmother was a painter, my brother’s a painter and my parents are both phenomenal writers—and I’ve seen creatives get marginalized all my life. I actually had some experience with that myself. I was a hip-hop producer before I went to law school and originally intended to be a music lawyer. I found that the music business was so grimy, it really turned me off to being a lawyer in that field. I quickly turned to employment law, which I found was very human, with many real-world elements. That started my career in litigation, and I worked for various employment boutique firms here in New York City until I started my own firm in 2009. That’s when I started spreading my wings a little bit, and I began to represent entertainment clients, fashion clients and the occasional sneaker client.

Q. How did you segue from representing fashion clients to becoming a part of Ye’s Yeezy empire?

A. When I was working at law firms, I had many creative contacts who were involved in music, fashion and sneakers who were growing their businesses but couldn’t afford the rates that my firms charged. When I started my own firm, I was able to build a stable of clients because I could provide a more flexible rate structure. I also was able to do some things for free for friends because I believed in them, and I took some cases on contingency. One of my clients was good friends with Kanye and went to work for Yeezy. A short time later, he asked me if I would help with some legal work. At that time, I was at a crossroads in my life. I was no longer a solo, and I had joined a California-based firm, as I saw many of my fashion and entertainment clients moving from New York to Los Angeles. I wasn’t dissatisfied with my legal career, but I definitely wasn’t as passionate about it as I would have liked. So I threw a Hail Mary out there. I said, “Hey, why don’t you just hire me to be the general counsel, and I’ll do whatever you need on the legal front?”

And it worked! How did it feel to be there?

Like my entire career had come full circle. I was now a lawyer at a place that was the mecca of streetwear, sneakers and culture, working for one of the most influential people in the world who was also a creative genius. I stayed there for 2½ years, and it was a wonderful time. It was intense and stressful, but it never felt like work to me because I was waking up every day doing exactly what I loved.

Q. What was it like working with an icon?

A. I have never seen anyone work harder in my life than Kanye West. You’d think that when you come from law and move to a fashion environment, you wouldn’t see that kind of discipline, but he was remarkable. He even inspired me to go back to school and get my executive MBA.

Q. You eventually left Yeezy and went back into private practice. Why?

A. It was just time. I met the head of our firm when I was at Yeezy. He reached out to me, and I enjoyed our talk—there are very few lawyers who understand the creative space, and I could tell he had the right vibe and was building something special with his firm. When I left Yeezy, I swore that I would never practice law again, but he said, “I’d love to have you at the firm—you can refer business, and we can work on some fun things together,” and now here I am, working on interesting things with people I respect and admire. I’ve been sucked back into law, but I am loving it!

Q. You’ve also co-founded a streetwear licensing company called 3 8 0 Group, and you’re chief operating officer and GC of Rares.io, which sells fractional ownership shares of sneakers and made the news last year for paying $1.8 million for Ye’s own Nike Air Yeezys. But a lot of the innovation in the streetwear space right now involves digital drip like NFTs and wearables. What do you think? Are you involved in the metaverse?

A. I started hearing the buzz about Web 3.0 and NFTs. I’ve never been afraid of new technology—I built my first computer at 7, and I play video games. So when I heard about this, I understood the hype, and I was eager to connect with this new community that’s blurring the lines between fashion and tech and streetwear and tech. I think some of the most successful people in streetwear, the ones who are disruptors, are just nerds. They’re people who weren’t accepted by the mainstream and did their own thing, so it’s only right that they are now disrupting a digital space. I am definitely roaming around the metaverse—if you see me there, I’ll be in a full suit of knight’s armor and a pair of Yeezy Wave Runners. I look really fresh, and everything is glowing like Tron. But I’m still bald.

Q. I’d like to talk to you about the “sneaker law” book. How did you get the idea to do this book?

A. Sneaker Law is like my baby. It took four years to write. I met my co-author after I started reading the articles he was writing for Complex about legal protection of sneakers. At the time, he was in law school and interning at Complex and I was a partner in a law firm, but I was eager to connect with him. Networking isn’t just up the food chain—you should network with anyone who inspires you. We became great friends and came up with this idea to write a business and legal textbook about the sneaker industry that presented intimidating topics like intellectual property, distribution and manufacturing in a way that was digestible and fun to read. If you look at it, it looks like it might be a civil procedure textbook, but then it’s red foil-stamped with the word “sneaker law” that’s stylized with a Metallica- Yeezus vibe. Then when you open it up, you realize it’s nothing like any textbook you’ve ever seen.

It sounds like your unique approach has worked—the book has really blown up.

It’s kind of solidified us as experts in the field. Now we’re often quoted in the news on anything that happens in this space. Over 40 law schools have invited us to lecture on sneaker law, and it’s now being taught independently at several schools, including Parsons. My co-author and I have become adjunct professors at law schools, and we’ve even lectured at Harvard Law School, which was unexpected. We are just so happy to be teaching about sneakers—it’s what we love.

Q. Why did you decide to self-publish?

A. It would have been hypocritical to go to a publisher for a book on entrepreneurism. The whole point is to tell our readers that, no matter what business you’re in, whether it’s sneakers or something else, you need to learn it inside and out and then try to do it on your own. So we learned how to publish a book ourselves. We may not sell as many copies as, say, Simon and Schuster, but we own it all. No one can tell us how to do it or what to do with it, and we take the lion’s share of the profits. You know, it’s like Jay-Z says, you have to own your own masters.

Q. And there’s merch! I love the branded T-shirts you have on your website.

A. Thank you! We’re very proud of the brand we’ve built. You have to have a little swag because that’s what sneaker culture is all about.