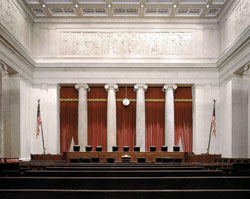 In Loughrin v. United States, the court held that the government did not have to prove that a defendant intended to defraud a financial institution to violate the statute. In the majority opinion, Justice Elena Kagan was making a point about financial transactions when she referred to a hypothetical “Jane,” who “traded in her car for money to take a bike trip cross-country.”

Justice Scalia, responding in his dissent to Justice Kagan’s point, inadvertently changed the name to “Jill.”

By the next day, the Supreme Court had revised the electronic slip opinion in the case, changing Scalia’s references from Jill to Jane.

It was an inconsequential change, but one of a type that occurs far more frequently in Supreme Court opinions than most people realize, according to a new study.

“The court makes all sorts of revisions, ranging from the most mundane to the most intriguing, with the vast majority not surprisingly falling into the former category,” writes Harvard Law School professor Richard J. Lazarus in “The (Non)Finality of Supreme Court Opinions,” an upcoming article for the Harvard Law Review. “With regard to the latter, several distinct pathways have emerged for revising opinions with varying degrees of transparency.”

Two more examples from this past court term help illustrate the kinds of after-the-fact changes made to the court’s opinions.

In her May 5 dissent in Town of Greece v. Galloway, in which the court upheld a New York state hamlet’s practice of opening its council meetings with prayer, Kagan discussed the message of religious tolerance that George Washington received in a 1790 visit to Newport, Rhode Island, which Kagan described as “the home of the first community of American Jews.”

The court, after being apprised by scholars that Newport was not, in fact, the first such community, changed Kagan’s dissent (presumably at her instigation or with her approval) to “home of one of the first communities of American Jews.”

A few days earlier, in his dissent in Environmental Protection Agency v. EME Homer City Generation, Scalia had mischaracterized an EPA legal argument from an earlier Supreme Court case. Several law professors and other court observers noticed the mistake and took to the Web. Within days, the dissent was quietly amended, including a change in a subheading over one section from the colorful “Plus ça Change: EPA’s Continuing Quest for Cost-Benefit Authority,” to the bland “Our Precedent.”

Lazarus says he had completed his 85-page article about a year ago, and it was being edited for publication in the Harvard Law Review’s December 2014 edition when the EME Homer City Generation correction was made. “I realized I had to do more,” he says. He released the study in draft form, which prompted a spate of media and scholarly attention.

Much of the article addresses the court’s historical practices for revising its opinions, such as when Chief Justice Roger B. Taney added some 18 pages to his Dred Scott opinion months after it was announced in 1857.

But the rest largely deals with the period after 1970, when the court first started putting a notice on its bench opinions and slip opinions that they were “subject to formal revision before publication in the preliminary print of the United States Reports.”

“Anyone can write to the reporter of decisions and notify [him or her] of a potential typographical or other formal error,” Lazarus says. Evidently, they do.

The article identifies examples from recent years, such as slip opinions that: miscalculated the number of copyrighted works that had entered the public domain; misidentified a U.S. senator who’d made a particular comment; and misstated who was president in 1799.

That came in American Insurance Association v. Garamendi, a 2003 opinion in which Justice David H. Souter discussed the “long-standing practice” of making executive agreements to settle claims of American nationals against foreign governments. The first example, Souter originally wrote, was in 1799, when “the Washington administration” settled a maritime dispute with the Dutch government.

The problem is that John Adams was president in 1799. The opinion published in the United States Reports reflected the correction. However, demonstrating another point made by Lazarus, such changes are not always made uniformly among the various Web sources of Supreme Court opinions. A reporter’s search for the Garamendi opinion found at least one source—Cornell University Law School’s Legal Information Institute—that still posted the version with George Washington as president in 1799.

One of the most troublesome revelations is that some “justices have revised their opinions in significant, including highly substantive, ways prior to their final and official publication in the U.S. Reports,” Lazarus says in the article.

Justice O’Connor wrote that “the dissent apparently agrees that if [certain of the court’s equal protection] cases have stare decisis effect, Texas’ sodomy law would not pass scrutiny under the equal protection clause, regardless of the type of rational-basis review that we apply.”

“The problem is that the ‘final,’ ‘official’ version of O’Connor’s opinion no longer includes this sentence,” Lazarus notes in the article. “It has been deleted in its entirety.”

The professor surmises that Justice O’Connor may have removed the passage as an accommodation to Justice Scalia, or that it addressed language in a draft version of Scalia’s dissent that was changed even before the first public release of slip opinions. (That is a frequent reason for post-announcement changes: A justice addresses points in a draft opinion that is later revised, but the justice does not fastidiously account for the colleague’s revision in her own opinion.) 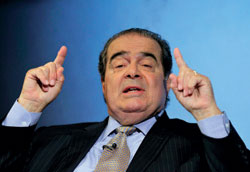 Justice Scalia, responding in his dissent to Justice Kagan’s point, inadvertently changed a name from “Jane” to “Jill.” Reuters/Brendan McDermid

Lazarus says such substantive changes “without meaningful notice” can cause practical problems “when the version of the court’s opinion upon which lower courts, other branches of government, and scholars and teachers rely can change—without notice—as many as five years after initial publication.”

“I have no problem with the justices revising their opinions,” Lazarus says. “But I think at the very least there needs to be transparency.”

Lazarus offers a host of suggestions to increase that transparency. For example, the court could provide more guidance over what constitutes a “formal error” and set different procedures for different degrees of error. And the court should distinguish revisions based on whether the person proposing the change was a party, an amicus or someone within the court. Finally, the court should provide after-the-fact notice of any changes, something that isn’t being done now.

Josh Blackman, an assistant professor at South Texas College of Law in Houston and an observer of the Supreme Court, says he was shocked to read how significant some of the revisions to opinions have been.

“The article brought to life how common this is,” he says. “Especially when it’s not just Jane and Jill but significant changes in doctrine.”

The legal technology community has come up with a solution that would add some transparency to opinion revisions.

David Zvenyach, a lawyer for the District of Columbia government, developed a relatively simple application that “scrapes” electronic slip opinions, looking for any changes. Next, Zvenyach developed an automatic Twitter feed that alerts subscribers to the changes. Soon after his open-source @SCOTUS_Servo feed launched in June, a tech-savvy follower added a function that shows changes in a side-by-side comparison between versions.

Zvenyach says the application is automated and is not dependent on his long-term participation.

Lazarus notes the justices have powerful reasons to get their opinions out quickly: to observe the court’s tradition of deciding all argued cases by the end of each term, and to preserve their majorities.

“All of us would like to bury our mistakes,” Lazarus says. “But we’re not all on the Supreme Court.”

This article originally appeared in the August 2014 issue of the ABA Journal with this headline: “Writing Their Wrongs: Justices regularly seek to change the errors of their ways.”