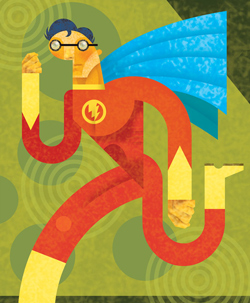 Most comic books are full of action and intrigue but bereft of quirky legal debate. Stepping up to fill that void are attorneys James Daily and Ryan Davidson, whose blog Law and the Multiverse has developed a cult following faster than a speeding bullet.

Since starting the blog last November, the two have examined such issues as whether the federal government can regulate superpowers as weapons without running afoul of the Second Amendment, what sort of evidence collected by superheroes is admissible in a court of law and where super-villains can best set up secret lairs without trampling on a nation’s sovereignty.

The idea for the blog started during a dinner party Daily was attending. Daily, an intellectual property lawyer who works for Stanford University at the Hoover Institution’s Project on Commercializing Innovation, says friends at the party encouraged him to explore the legal issues that superheroes might face. The suggestion led him to MetaFilter, a community blog where members can converse with each other.

The two set up Law and the Multiverse with modest ambitions. Both wanted to educate people about the law, but they ran into the ethical roadblocks associated with discussing real-life situations. Discussing comic book characters offered an appealing alternative.

“Comics have well-established characters, which most people are familiar with,” Daily says. “This makes them interesting to look at from a legal perspective. We can set up scenarios, and the superhero world offers a rich environment in which we can treat real legal concerns.”

Davidson, who recently left work as in-house lawyer at an Indiana insurance company to become an associate at Hunt Suedhoff Kalamaros in Fort Wayne, Ind., says he used to be confronted at work by “less culturally savvy bosses,” some of whom were confused by what he’s doing. But the pair’s writings—which have covered legal issues such as immigration, labor, criminal procedure, privacy and IP—amount to a “mental workout,” he says, and have provided an opportunity to research esoteric questions he might not otherwise face, including how the Federal Aviation Administration might deal with flying superheroes.

The musings, though speculative, have attracted a growing amount of attention from other lawyers who similarly enjoy science fiction in their spare time, as well as from comic book “fanboys” who appreciate their interests being taken seriously. Daily and Davidson have even been approached by publishers and film studios about taking their ideas to the next level.

For now, the two plan to continue writing regularly on the topic. And they say they get some of their best ideas from readers of the blog, which now registers more than 20,000 hits daily.

“At the beginning, this wasn’t a huge time investment,” Daily says.

“Now that it’s taken off beyond expectations, we continue to put more and more time into it. But it’s a lot of fun.”