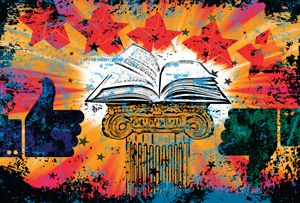 First, the internet has changed everything. Today you can find short book reviews on sites such as Amazon.com. These range from highly informed (rare) to absolutely worthless (abundant). Some will give a “star rating,” often based on such things as whether the book arrived on time and whether it had a crumpled dust jacket. Also, many of the gushing “reviews” seem to have been written either by the author (under a disguised name) or friends of the author. Computing specialists have actually developed bots to detect fake reviews.

Reviewers seem to prefer posting online reviews, so they can “seed” the field. That is, if they like or dislike a book, they try to get their views out early, so others will hesitate to disagree. If the book is written by a friend, positive reviews are thought to bolster its popularity. If the book is written by a competitor or an intellectual nemesis, negative reviews can poison perceptions. Once the review is published online, others (including bookselling websites) will provide a link to it, thereby enhancing its influence.

Second, when it comes to law reviews, student editors have lost the impetus to publish book reviews. As professor Steven Lubet of Northwestern University’s Pritzker School of Law in Chicago tells me, law-student editors have no good way of evaluating long essay reviews. Meanwhile, “they are unfamiliar with the genre of shorter reviews—of the 800-word variety that appear regularly in other disciplines—so they don’t seem to value those.”

A few years ago, Sanford Levinson, a law professor at the University of Texas at Austin School of Law, speculated in a thoughtful and informative essay in the Texas Law Review that the explanation for vanishing book reviews might lie in the desire of student editors to avoid having to explain to local faculty why their books haven’t been chosen for reviews. (For this reason and many others, we probably need more faculty-edited law reviews.)

Third, it might well be that less demand for serious book criticism exists simply because fewer serious readers exist. Although a recent study found that 92 percent of college students prefer reading physical books to e-books, reading today must compete with the onslaught of viral videos, podcasts and smartphone games—not to mention the ceaseless torrent of distractions from our innumerable social media platforms. Allied to this cognitive competition is the view that reading about books is an indirect, derivative activity—some people say they would rather read the book than read about it.

This goes to the crux of the matter: What does a book review accomplish? It helps readers decide which of the many new books merit their attention. It keeps readers abreast of recent developments in fields of interest and provides new ways of thinking about various disciplines. It also allows readers to scan through new offerings within their specialties and to broaden their horizons by discovering issues and ideas in related fields. Browsing through reviews is akin to roaming the aisles of a brick-and-mortar bookstore (itself a critically endangered species). Although the selection is narrower, it’s a way of glimpsing the merits of publishers’ current offerings.

The question of merit is important in a book review. Any competent reviewer goes beyond mere description to make a fair statement of the book’s contents and overarching themes. A good review assesses the book’s importance in the field. Readers can reasonably expect some guidance about what the book promises in the way of new information and the reviewer’s informed opinion about whether or how well the book delivers on its promises.

Naturally, this type of guidance presupposes expertise. No reviewer can give a first-rate assessment of a book without some prior knowledge about the topic. Someone asked to review a book in an unfamiliar field either should decline the assignment or at least take a crash course.

Also, of course, it’s important for reviewers to avoid books on which their impartiality could reasonably be questioned. Bias torpedoes credibility. It would have made no sense for Charles Alan Wright to review Moore’s Federal Practice or for James W. Moore to review Wright’s Federal Practice and Procedure.

Some reviewers can’t seem to bring themselves to say a negative word. Often they haven’t done their homework, and they assume that the “safe” course is a superficial encomium—or what Anthony Trollope, the 19th-century novelist, called “greasy adulation.” Praise lavished without knowledge, with no critical understanding of other works that have preceded the book at hand, disserves readers. Reviewers should assess the book’s significance within the context of the existing literature. Perhaps the ideal tone is that of the omniscient narrator, tending toward kindness but never failing to be honest in the evaluation.

But if uncritical praise is a fault in reviewing a book, so is querulous nitpicking and uncivil sniping. Trollope referred to being “cut up into mincemeat for the delight of those who love sharp invective.” Although the caviling reviewer might feel a temporary ego boost, this approach also disserves readers. It’s one thing if the prose in the work being reviewed is indictable as unbearably unidiomatic, stilted or dull. These things certainly detract from the author’s message, and they can be worth pointing out. But to dwell on a couple of uncharacteristic peccadilloes, at the cost of giving the book a thoughtful and fair evaluation, reflects more poorly on the reviewer than it does on the author. And if a mistake is to be called out, it must surely be a mistake—an erroneous allegation of error is reprehensible.

The “trashing” review calls to mind the satirical works of British author Stephen Potter on gamesmanship, one-upmanship and similar ploy-filled topics. In his book Lifemanship, Potter included a chapter that focused on “book-reviewmanship.” The way to review a book negatively without actually reading it, said Potter, is this: Go to the middle of the book, say page 347; find the biggest footnote you can with a string citation; locate an author, say John Moncrieff, in the middle of that footnote; and there you have your lead: “Although James Fiddle purports to have written a ‘seminal’ book on primogeniture in English law, in fact many of its conclusions derive from John Moncrieff’s 1967 article on the subject. Yet Moncrieff’s contributions to the field have been relegated to a single paltry footnote on page 347.”

This formula for a negative book review requires about 30 seconds of effort. Pure fiction, you say? There was once a man who habitually did something like that. His name was William Kenrick (1725-1779). The son of an English corset maker, he constantly wrote scurrilous attacks on his more famous contemporaries, such as lexicographer Samuel Johnson and playwright Oliver Goldsmith, trying to manufacture controversy where there was none. If his incitements met with stoic silence, he would move on to other literary victims. “His vanity led him to fancy himself equal to any task without serious study,” states the Dictionary of National Biography, which describes him as a “superlative scoundrel” who “seldom wrote without a bottle of brandy at his elbow.” This scandalmonger, a precursor to the internet troll, was never without illustrious enemies.

Whether it’s a worse fate for a book to be subjected to this type of flame-throwing reviewer or to be ignored altogether is debatable. For the time being, though, law-related books mostly endure the latter fate—with no change in sight.

Bryan A. Garner, the president of LawProse Inc., is the author most recently of The Chicago Guide to Grammar, Usage, and Punctuation and Garner’s Modern English Usage. Since 1995, he has been editor-in-chief of Black’s Law Dictionary. Follow on Twitter @BryanAGarner.

This article originally appeared in the January 2017 issue of the ABA Journal with this headline: "A Lost Art: Read any good book reviews lately? Probably not—and here’s why that can be a bad thing."