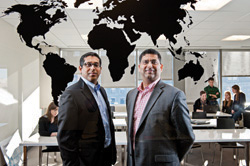 Vilas (left) and Vikas Dhar opened their own law firm so that, in addition to offering traditional legal services, they could provide discounted or pro bono work for socially conscious nonprofits and provide space for nonprofit clients to share ideas. Photo by Webb Chappell.

The bar for working toward social change has been set pretty high when your 90-year-old grandfather marched for civil rights in India with Mahatma Gandhi.

So for Vilas and Vikas Dhar, whose parents immigrated to Champaign, Ill., from India when the boys were young, traditional pro bono work at a law firm just wasn’t going to cut it.

“Typically, pro bono work is 3 to 5 percent of what a law firm does,” Vikas says. “I was at a midlevel boutique, and that kind of percentage seemed almost a distraction.”

The self-professed Midwestern guys gave notice at their respective law firms and launched their own firm, Dhar Law, in 2010 to offer traditional legal services combined with discounted or no-cost work for socially conscious nonprofits.

But they weren’t done. Last June they launched in their office space an incubator, called the Next Mile, for nonprofit clients to share a workspace and ideas.

Today the Boston firm, with its eight associates and a smattering of senior and of counsel lawyers, devotes about 40 percent of its time working for three types of socially conscious clients: nonprofits for which the firm typically works pro bono; funds investing in social enterprise businesses, which typically pay market or near-market rates; and social entrepreneurs who’ve created for-profit enterprises whose mission is to achieve social change.

“With the third category, we reduce fees to a level that’s appropriate,” explains Vilas. “If it’s doing $10 million in revenue in Africa, it won’t pay the same rates as a two-person startup working on child lunches. … It’s about pricing in a fair way, but wanting to be certain everybody who needs our services accesses them.”

The firm is profitable, says Vilas, primarily through the remaining 60 percent of its work for traditional clients. They pay market rates, Vilas says, and they appreciate that by working with Dhar Law, they’re supporting social causes.

“We can also bring understandings of a whole different set of the business world than others would offer,” contends Vilas. “For example, where companies are looking for more diverse suppliers, we can say there’s a diversity here that doesn’t come from the typical market of gender or race, but one that puts us firmly on the ground in Haiti, Rwanda and at a community level here in the United States.”

The Next Mile project is essentially a bullpen that houses nonprofits—14 currently—and was created to trigger successes through the cross-pollination of staff and ideas.

“We have 13,500 square feet in our floor plan,” Vilas says. “About 5,000 is set aside to provide space for nonprofits to collaborate. … We fund the brick-and-mortar and ask organizations to pay a little as a matter of buy-in. “Then we bring people to the table to talk to these nonprofits about things like their mission, strategy and fundraising, and to share their own lessons learned. As far as we know, we’re the only place in the country with this arrangement, not just among law firms but also among nonprofits.”

The space includes common areas for classes, lectures and community events. “We do once-a-week lunch seminars open to the community, and we get anywhere from 30 to 100 people, depending on the subject,” Vilas says.

The events are often more than your typical brown-bag lunches. “We brought [the chief of staff at the Bill & Melinda Gates Foundation] in to talk about how a nonprofit scales,” says Vilas. “It was the largest nonprofit in the world engaging with 20 founders of smaller nonprofit organizations. It was an incredible conversation.”

There are also collaborative workspaces where nonprofit staffers can meet up and bat around ideas. “There’s been this incredible flow of not just big-picture ideas but day-to-day implementation and strategies between the two organizations,” says Vilas. “With other clients, somebody will come to the table and say, ‘We’re working in Mali and had a security situation. What should we be thinking about? Multiple organizations said, ‘Here’s our security protocol.’ “

The Dhars are thinking of expanding the Next Mile to New York City. “It’s one of those ideas that every time we’ve talked about it in the nonprofit sector, somebody smacks their head,” Vilas says. “That’s been incredibly exciting for us.”

This article originally appeared in the March 2014 issue of the ABA Journal with this headline: “Going the Distance: Law firm’s Next Mile aids nonprofits and social change.”