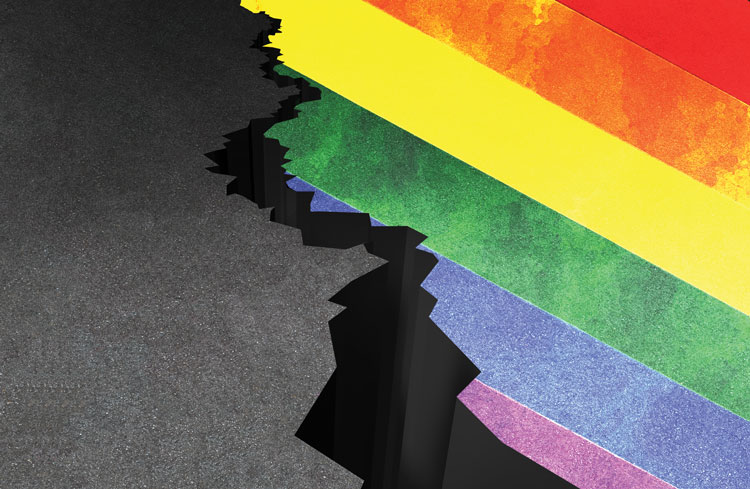 The bad blood between Brandon McInerney and Larry King was well known among their classmates at E.O. Green Junior High in Oxnard, California. It got so bad that McInerney told another student he planned to kill King.

King, 15, was openly gay. He occasionally wore makeup and heels and flirted with other boys, even though they gave him a hard time for it. He especially liked to flirt with McInerney, despite the anger and embarrassment it caused McInerney. One day, King loudly called out, “What’s up, baby?” to McInerney in a crowded hallway.

The next morning, during first period, McInerney, then 14, pulled out a gun and shot King to death.

In California, the evidence of premeditation could have been enough to earn McInerney a conviction for first-degree murder. But at the 2011 trial, McInerney’s defense lawyers argued that he should instead be convicted of voluntary manslaughter because King’s flirtatious comments had pushed McInerney to an “emotional breaking point.” Enough jurors agreed. Later on, one juror wrote a letter to the Ventura County District Attorney’s office, calling McInerney’s prosecution a “propaganda-filled witch hunt.”

“You all know the victim had a long history of deviant behavior,” the juror wrote. “After weeks of testimony, it is my firm belief that this young man reacted to being bullied and being the target of Larry King’s sexual harassment.”

The juror was responding to what’s known as a “gay panic defense,” in which defendants say victims provoked the crime by revealing their sexuality or making a nonviolent sexual pass. Like its close cousin, the trans panic defense, it’s a way to diminish the defendant’s responsibility for the crime—in McInerney’s case, to initially argue for voluntary manslaughter rather than first-degree murder. It’s also offensive to many in the LGBT community who say it blames the victim and tells the world that gay and trans lives are less valuable than other people’s.

That’s part of why the ABA House of Delegates voted in 2013 to urge jurisdictions to ban gay and trans panic defenses. Now, a slew of states are taking action. Illinois and Rhode Island bans on the defenses went into effect last year, and bills were introduced in at least six other legislatures, including Congress.

“It does serve an important purpose [in] that it gives the judges the power to really reject these types of defenses when they come up,” says Jordan Blair Woods, a professor who teaches criminal law and law and sexuality at the University of Arkansas School of Law. “And it’s a firm statement in the criminal law that these types of inequalities are not a reason to justify violence.”

Gay panic defenses have been around since at least the 1960s, according to a 2016 report Woods co-authored at the UCLA School of Law’s Williams Institute, a think tank on LGBT issues. “Homosexual panic disorder” was recognized as a diagnosis in the first edition of the American Psychiatric Association’s Diagnostic and Statistical Manual of Mental Disorders, which helped legitimize the defense. Both gay panic and homosexuality have been removed from the DSM, but the Williams Institute report found that almost half the states had considered appellate cases involving some form of the defense.

Indeed, the report notes that there are several ways in which gay or trans panic can be used to defend against a criminal charge. The one McInerney used is common: The victim provoked the defendant with a same-sex pass or a revelation about the victim’s gender or sexuality, reducing the defendant’s responsibility for the crime. Another common argument says a victim’s actions, sexuality or gender identity caused the defendant to fly into a panic or rage that caused a temporary mental breakdown, creating diminished capacity or temporary insanity. Less commonly, a defendant might argue self-defense against an unwanted sexual advance.

But all versions of it are harmful, says D’Arcy Kemnitz, executive director of the National LGBT Bar Association.

“It tells LGBTQ+ individuals their lives are worth less than those of their heterosexual friends and neighbors, it excuses violence committed against the LGBTQ+ community, it further implies that there is something unnatural and dangerous about same-sex intimacy,” Kemnitz says, using a plus sign to include a larger number of people who are not straight or cisgender.

In 2013, when the ABA passed Resolution 113A, which urged jurisdictions to ban gay and trans panic defenses, there were no such laws. That started changing in 2014, when California passed a law saying killings are unreasonable if they stem from discovery or knowledge of “the victim’s actual or perceived gender, gender identity, gender expression or sexual orientation.”

Illinois followed in 2017 with a law providing that “discovery, knowledge or disclosure of the victim’s sexual orientation” cannot mitigate first-degree murder or constitute provocation. That took effect in early 2018, the same year that Rhode Island forbade the use of gay and trans panic to support provocation, self-defense or diminished mental capacity arguments.

They may be on the forefront of a legislative trend. In 2018, legislation to ban the defenses was considered in Congress, as well as in Georgia, Minnesota, New Jersey, New York, Pennsylvania and Washington, D.C. Some of those bills had stalled by early fall, but Monisha Harrell of Seattle-based Equal Rights Washington says her organization is working with a legislator in that state to introduce a comprehensive bill in 2019.

This article was published in the January-Februrary 2018 ABA Journal magazine with the title "Stop the Panic."