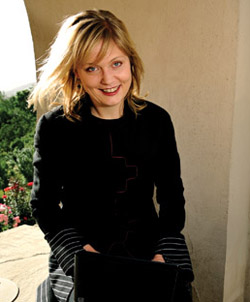 Vonda Vandaveer: "It's a matter of finding a place to plug in." Photo by Philip Poupin/Getty Images for ABA Journal

As the wife of a foreign services officer, Vonda Vandaveer found herself moving to a different country about every other year. Finding a law practice job took months, and by the time she got a position, it often was time to move again.

“It wasn’t a good way to build a career,” she says. Vandaveer’s last gig working for someone else, a Kuwaiti law firm, ended in July 2003.

Today, Vandaveer owns her own U.S.-based firm, V.K. Vandaveer, but people and businesses outside the States are her target clientele. Her work centers on immigration, international business, and U.S. government procurement and contracting. Her blog, U.S. Business and Immigration Law, declares that the firm can communicate with clients in English, French, Arabic and Spanish.

The firm has a physical office in Washington, D.C., but for the most part operates remotely, with Vandaveer traveling around the world to her husband’s various assignments.

In the past seven years she’s lived and practiced in Tunisia and Washington, and she’s heading to Brussels for her husband’s next assignment.

But Vandaveer spent more than a year in Afghanistan on sabbatical from the firm and doing government contract work while her husband was stationed in Kabul.

“Everything was in maintenance mode as opposed to closing the office,” Vandaveer says, adding that while she was gone, building an international business practice was put on hold and her staff focused solely on immigration work.

“I wanted to have everything geared up so the immigration side can run itself,” Vandaveer says. She spent much of 2008 preparing the firm to run in her absence while she studied Dari, Afghanistan’s primary language.

Vandaveer admits that when she got to Afghanistan, yielding control was hard. Her associate also had to adjust to working for a boss who was never there physically. Even when Vandaveer was living in Washing­ton and preparing staff for her Afghanistan sabbatical, she worked remotely—she prefers working out of her home or a nearby coffee shop.

“When I was getting everybody trained up, part of the process was not letting anything out of the office until I saw it,” Vandaveer says, adding that on documents prepared by staff, “initially there was a lot of red [editing] and little white. But over time there was less red and more white. Then you get more comfortable with them doing things on their own.”

The practice is staffed by a legal services manager who has worked for Vandaveer a few years, an associate and an immigration law clerk. Like Vandaveer, the staff mostly telecommutes.

“They work in the office and from their homes, coffee shops and poolside with child, etc., as is convenient,” Vandaveer says. “My legal services manager has a BlackBerry, laptop and a type of card you put in your laptop to pick up Internet anywhere using the cellphone signal.”

While Vandaveer describes her time in Afghanistan as a sabbatical, she also saw it as business development. Part of her contract work was serving as project manager for the U.S. State Department’s Bureau of International Narcotics and Law. The department used a contractor for the project with American and Afghan prosecutors and defense counsel advising institutions, including the Afghan attorney general’s office, the ministry of justice and the ministry of women’s affairs.

“Now I have an understanding of Afghanistan that a lot of other Ameri­cans wouldn’t have,” Vandaveer says. “It’s a matter of finding a place to plug in. I know the people who know the people now. I had zero interaction with them before. Now I have friends and colleagues there.”

Living at the embassy compound in Kabul, Vandaveer had Internet access. She also kept in touch with other lawyers in the U.S. via Solo­Sez, the message board for solo and small-firm practitioners offered by the ABA’s General Practice, Solo and Small Firm Division.

She’d leave the embassy compound about twice a month in an armored car and visit heavily guarded shops. Free time was also spent playing soccer with other residents of the compound.

After spending part of this summer in the U.S. and Spain, Vanda­veer was called back to Afghanistan briefly for more project management help.

In August, Vandaveer said she planned to be back to practicing law soon—this time from Belgium—drafting and reviewing contracts, providing general business advice and handling immigration filings. She also handles a few U.S. Govern­ment Accountability Office protests for federal bids.

“A lot of smaller businesses can’t afford the huge law firms, and the smaller outfits are not necessarily internationally focused,” says Van­daveer, who relies on a laptop, an Internet connection and a cellphone with a 202 area code to do business.

Forms for administrative court filings can be found online. Once completed, the forms are e-mailed to clients if signatures are necessary, then e-mailed to Vandaveer’s office staff. The completed forms are printed out and sent to the appropriate courts by overnight mail. Clients generally pay with wire transfers.

“I’ll be doing basically what I was doing in Tunisia,” Vandaveer says. For the most part, that’s writing and researching from her dining room table with a few breaks to play soccer with foreign services officers and their spouses.

“You can do this kind of thing now because of all the technology,” Vandaveer says. “The spouse of a State Department person couldn’t have been a lawyer 20 years ago. You kept going to each post, finding a new job. … Obviously, that would get to be a drag.”