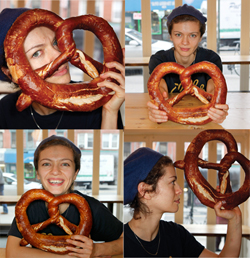 Like many other lawyers, Lina Kulchinsky works 12-hour days. Only hers are no longer spent in an office, but rather making pretzels at the Sigmund Pretzel Shop, which she opened with a partner in Manhattan’s Alphabet City neighborhood on the Lower East Side.

A Russian native, Kulchinsky moved to New York in 2001 to attend New York University’s LLM program. She previously worked as a paralegal for Cleary Gottlieb in the firm’s Moscow office. But Kulchinsky says she soon found herself more fascinated with baking than with the law. “I developed a thing for bakery equipment—and all kinds of professional equipment. Pastry school was next,” says Kulchinsky, who went on to attend the bakery program at the Institute of Culinary Education in New York.

She honed her pastry-making skills with positions at well-known restaurants in Tribeca, followed by a stint in catering.

Kulchinsky says the shop’s name reflects her love of Eastern European culture. “It’s the dreamiest German/Austrian name that came to mind,” she says.

Although her shop may reflect her dreams, the work is anything but light. She starts baking most mornings at 10, firing the ovens at least four times daily before closing at 10 p.m.