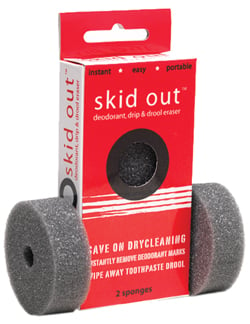 Irvine, Calif., attorney Kim Olenicoff’s estate planning practice has slowed in the past couple of years due to the economy, but that’s OK with her because the need to guard against flatulence and sweat stains appears to be recession-proof.

Olenicoff runs Solutions That Stick. Her former sideline now has turned into a nationwide retail business that offers nearly two dozen products with names like Subtle Butt and Garment Guard.

“People say, ‘Aren’t you the girl that makes fart pads?’ ” Olenicoff laughs. “I have a law degree, and I spend most of my day dealing with sweat, farts and boobs. You never know where life is going to take you.”

Garment Guard, a disposable shield that sticks to the armpits of a shirt and absorbs the yellow, started it all in 1999 around the time Olenicoff was finishing law school at the University of Southern California.

She made them for herself and friends at first before landing an account at Nordstrom. “I thought: If this does this much money on the side, what if I put more attention into it and marketed it?” she says.

Olenicoff’s good ideas have since multiplied, with nine original products and 13 more concepts that she’s purchased.

Garment Guard was recently passed in sales by Subtle Butt, a disposable body-gas neutralizer that’s sold more than 10,000 units. She figures at least half of the sales are gag gifts.

The idea for Subtle Butt wafted into her brain during a plane trip home from a scuba-diving excursion to Mexico. “After a weekend of tacos and beer and diving, the plane ride home just stank,” she says. She launched the product less than a month later, a record time for her for concept-to-execution.

Though Olenicoff’s products are a far cry from the kinds of things most lawyers deal with on a daily basis, she credits the research skills she learned in law school with giving her the confidence and know-how.

“People don’t do them because it’s so expensive and so time-consuming,” she says. “You’ve been in insurance sales, and suddenly you’re going to dabble in manufacturing and marketing? It’s scary to leave a guaranteed paycheck for the wild unknown.”