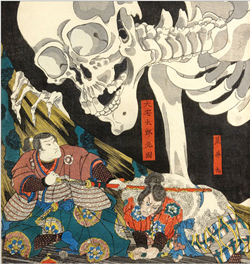 Courtesy of Trustees of the British Museum

Wait, did someone say art gallery?

It turns out Miller, a New York University law professor and special counsel at Milberg, is also a serious art collector. Miller taught at Harvard Law School for 36 years, wrote more than 40 books, and has been a host and legal commentator on TV. All the while, he’s been quietly amassing a dazzling collection of prints by Japanese artist Utagawa Kuniyoshi.

“I’m a stealth collector,” says Miller, who spied his first Kuniyoshi print in a London shop in the mid-1970s.

Miller’s collection of nearly 1,900 prints is permanently housed at the British Museum—a gift he made because the museum agreed to keep the entire collection together. He’s able to see them in a catalog and online, but still, there are times he longs for the real thing. Now, 140 of those prints are on display through June 13 at the Japan Society in New York City.

Kuniyoshi was an influential and versatile 19th century artist whose work ranged from the whimsical to the macabre. His subjects included everything from bucolic landscapes to samurai warriors, kabuki theater, legendary heroes and frightening depictions of monsters and demons.

Miller was drawn to the power exuding from the artist’s warrior prints. He also hails Kuniyoshi as a champion of First Amendment rights, praising his innovative ability to use symbolism to depict forbidden subjects. “He was a master at evading the very strict Japanese censorship laws” imposed in 1842, Miller says. “He was a free spirit.”

“If you collect an artist for as many years as I did,” Miller says, “you become the artist’s alter ego.”