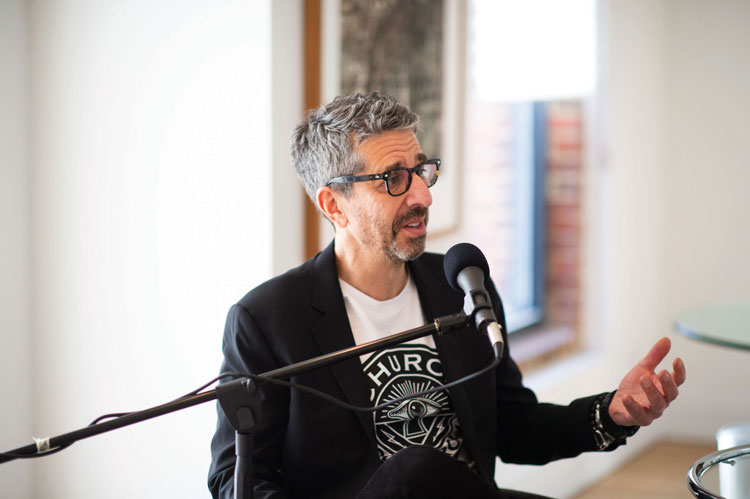 Photo of Jason Flom courtesy of the Press House

When Jason Flom was a boy, his father, Joseph, a renowned mergers and acquisitions lawyer, gave him a piece of advice: “Do whatever you want for a living, but make the world a better place because that’s the only success that matters.”

Flom, who grew up in New York City, became a highly successful record executive with a knack for discovering and nurturing major talent. He served as chairman and CEO at Atlantic Records, Virgin Records and Capitol Music Group and launched the careers of recording artists such as Katy Perry, Lorde and Kid Rock. He’s also the founder and CEO of Lava Records.

But the success that matters most to Flom is his work as an advocate for criminal justice reform and as host and producer of the podcasts Wrongful Conviction and Righteous Convictions. Flom’s interest in criminal justice was sparked when he read a newspaper article about a man named Steven Lennon, a nonviolent first-time offender sentenced to 15 years in prison for cocaine possession. The story resonated with Flom, once a substance abuser himself.

“I’m not a religious person, but I thought, ‘There but for the grace of God go I,’” Flom says. “I had been sober about eight years by then. Had circumstances been different, it could have been me.”

Flom thought Lennon’s sentence was clearly disproportionate to the crime. “After I read that article, I was flabbergasted—and I decided I had to do something, but I didn’t know what to do.”

He called Lennon’s mother. “I offered her some money to hire a new lawyer,” Flom says. “So I called the only criminal defense attorney I knew. I knew him because he had worked for recording artists who got into some trouble. He agreed to take the case pro bono.”

A judge eventually granted Lennon an early release, and Flom had a new calling: He became a founding board member of the Innocence Project and joined the board of FAMM, also known as Families Against Mandatory Minimums.

Inspired by the work of the Innocence Project, Flom started his Wrongful Conviction podcast in 2016.

“I’m so endlessly inspired by these people—by their strength and spirit and will to live and let go of all this bitterness,” he says of the wrongly convicted. “I thought if we could create a living document to memorialize these cases and inspire people to take action and get motivated to do things to change the system, we could make a difference.”

The podcast guests tell compelling, heartbreaking tales of injustice, false confessions, and of their lives and families being torn apart. “It’s pretty cathartic for them to have their stories told,” Flom says. “They want to help others. It could help jurors in the future to avoid mistakes. This has had a definite impact. It’s one of my proudest moments.”

Among the powerful stories is the saga of Daniel Villegas, who was 16 when he was coerced into confessing to a double murder in El Paso, Texas. He was granted a new trial after 19 years in prison and was offered a deal called an Alford plea, which would have allowed him to plead guilty, maintain his innocence and be freed without having to serve more time behind bars.

“He wanted to take a plea,” Flom says. “His wife said she heard this podcast and learned the tricks that police used, and they listened.”

Villegas decided to go to trial. “As a result, he was found actually innocent,” Flom says. “Having and hearing about those kinds of things makes me want to work harder, smarter and better, and amplify what we’re doing here today.”

Flom has taken his campaign further by producing another podcast, Righteous Convictions. “I couldn’t resist the play on words,” he says. “It centers around me interviewing people who are doing extraordinary things to improve our criminal justice system. It’s trying to shine a light on the amazing work they’re doing and inspiring others to take actions in their own lives that will make a difference.”

Flom is grateful that his celebrity and relationships with music stars have given him entrée into this world. “It sometimes helps me to open doors that otherwise might be closed to me if I was just a straight-up advocate,” he says. “Some of these decision-makers in positions of power may be interested in taking a meeting with me because of my music business background. For them, they don’t meet someone every day who’s responsible for signing Katy Perry or Lorde, Matchbox Twenty, Kid Rock and Greta Van Fleet.”

He sometimes feels as if he’s leading a double life. “I had this moment about three years ago. I was on death row in Texas to visit and conduct an interview with a guy named Rob Will—an innocent man,” Flom recalls. “I spent about four hours there talking with him through the bulletproof glass, and it was a very powerful experience.”

Afterward, he flew to Los Angeles. “It was Grammy week. I ended up sitting in the front row with my son, and it literally popped into my head that I just went from death row to the front row,” he says. “It’s definitely a yin-yang thing. I consider it a great privilege to be of service to other people. This is not a hobby. This is my work.”

And that work has led to real change. “The podcast has been cited by lawmakers in different states where they have been motivated to create reform laws, such as demanding interrogations be recorded, and in a compensation bill for the wrongly convicted,” he says. “I never thought this humble little podcast could have an impact.”

Flom is carrying forward the spirit of his late father, whose legal career with Skadden, Arps, Slate, Meagher & Flom was a success by any measure but whose legacy also was also defined by his philanthropy. “My dad would be proud.”

This story was originally published in the October/November 2022 issue of the ABA Journal under the headline: “Behind the Mic: Jason Flom’s podcasts shine a light on criminal injustice.”