Lawyers are dealing with changing rules on college sexual assault 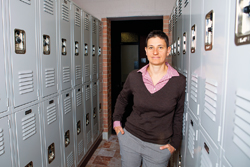 Erin Buzuvis: “Schools want… to make their own decisions, in terms of what’s right for their community.” Photo by Jane Shauck.

As colleges grapple with the recent publicity over campus sexual assaults and violence, so, too, are lawyers dealing with the complicated legal issues involved in filing and investigating grievances. The problem, some lawyers say, is that due process has been abandoned in campus disciplinary procedures that address student-on-student sexual misconduct claims.

Many point to a 2011 “Dear colleague” letter from the U.S. Department of Education’s Office for Civil Rights. It states that sexual violence should be included among the offenses banned by Title IX of the Education Amendments of 1972, which prohibits gender discrimination in federally funded institutions and programs. The letter also states that schools must use the preponderance of the evidence standard—which decides whether it is more likely than not that the act occurred—when making determinations about sexual harassment.

Some lawyers argue that the standard of clear and convincing evidence, which requires a high probability or reasonable certainty that an act occurred, would be the more appropriate evidentiary standard, considering the possible severe consequences of a campus discipline finding. They note that accused students face the prospects of being ostracized, expelled or subject to subsequent criminal investigations.

In January, California passed a law requiring universities to adopt a standard of affirmative consent in their discipline policies. Title IX does not tell universities to include such a standard in campus sexual misconduct investigations, says Erin Buzuvis, a Western New England University law professor and co-founder of the Title IX Blog.

But, she adds, universities “have to engage in calculated decision-making that is meant to address and protect harassment from occurring. Schools want the ability to make their own decisions, in terms of what’s right for their community and their students.”

Lawyers also complain that some students accused of sexual violence or harassment cannot ask witnesses questions directly in interviews or hearings. If the witness wants confidentiality, his or her identity is not shared with the accused. And some complaints are lodged a year or more after the incident in question. In addition, some say that students who claim they were victims of campus sexual violence are not always truthful.

“From a lawyer’s point of view, the procedural protections—given the consequences—are woefully inadequate,” says David Duncan, a Boston lawyer who represents both complainants and accused college students involved in sexual misconduct investigations. “Institutions of higher learning are dedicated to preserving their images. They are not dedicated to finding the truth or administering justice.”

As of December, the OCR had open investigations involving 95 colleges accused of mishandling sexual violence and harassment investigations. If a school is found not in compliance with Title IX, victims can sue for monetary damages, and the federal government can target the school for enforcement action.

“Universities are sort of rail-roading guys accused of sexual misconduct right now, because they think that’s what the Department of Education wants,” says Brett Sokolow, president of the NCHERM Group (an acronym for the National Center for Higher Education Risk Management), a Malvern, Pennsylvania-based organization that advises schools on handling these types of investigations.

A December OCR finding against Harvard Law School determined that the school was not in compliance with Title IX—in part because it used the clear and convincing standard, rather than preponderance—while investigating a student-on-student claim involving sexual misconduct.

The decision considered two claims. In one, the school’s administrative board, which has decision-making power, rejected a prior disciplinary board recommendation to expel a student. Besides using the wrong standard, the agency determined, there were significant delays in resolving the claim, and the school did not provide equal opportunities for post-petition review.

It was also found that the school’s administrative board, as well as others involved in the decision-making process, had not received appropriate training. Under the resolution agreement Harvard Law School entered into with the DOE, training will be provided for faculty who participate in the adjudication or review of sexual misconduct claims.

How the faculty will respond remains to be seen. After Harvard sought to install a new university-wide sexual harassment and violence policy last July, 28 law professors signed a letter published in the Boston Globe in October contending that the policy “lack[s] the most basic elements of fairness and due process” and is “overwhelmingly stacked against the accused.”

There’s a sense among some law school faculty that Harvard should have pushed back on the OCR finding, particularly regarding due process rights for the accused, says professor Elizabeth Bartholet, one of the signers.

“There are many university leaders who have a problem with the policy. Harvard could have provided an important leadership role in terms of challenging the government. I think [universities] are very nervous and are acting incredibly timidly,” says Bartholet, who serves as faculty director of the law school’s Child Advocacy Program.

Harvard’s sexual and gender-based harassment policy states that “when a person is so impaired or incapacitated as to be incapable of requesting or inviting the conduct, conduct of a sexual nature is deemed unwelcome, provided that the respondent knew or reasonably should have known of the person’s impairment or incapacity.”

According to Bartholet, someone who had three alcoholic beverages could be considered impaired. She sees the policy statement as unrealistic and one-sided. “It doesn’t matter who did the pursuing. Whoever decides to file the charge gets to be the complainant,” she says.

“Sexual harassment is a very easy thing to claim,” Bartholet adds. “That’s why it’s so important to have a process that is going to flush out the facts.”

Others say that schools go too easy on students who engage in sexual misconduct. And with regard to due process rights, they note that campus investigations and hearings have different goals from the criminal justice system, with different protections.

Wendy Murphy, a lawyer who filed the OCR complaints against Harvard Law School and a separate complaint against Harvard University on behalf of anonymous victims, says that people who experience sexual assault have their stories questioned far more frequently than those subject to other sorts of violence.

“It’s extraordinary that people are complaining that [the investigation process] is so unfair or unusual, because it’s been in place for decades and no one has ever complained about it in the context of racial or ethnic violence,” says Murphy, an adjunct professor at New England School of Law.

She asks: “How can it only be a due process problem for sexist violence” but not for other infractions?

The California law defines affirmative consent as “affirmative, conscious and voluntary agreement” to a sexual activity. If someone is “incapacitated due to the influence of drugs, alcohol or medication,” the law states, he or she cannot give consent. Students also are incapable of giving consent if they’re asleep, unconscious or can’t communicate because of a mental or physical condition. But Sokolow says that if colleges are serious about eliminating student-on-student sexual violence and harassment, they need to engage in significant educational outreach and target teens before they get to college.

There’s a common perception among college students that peers who rape are “sex-starved, desperate guys who have no game and hide in the bushes,” Sokolow says.

But that’s inaccurate, he adds, suggesting that a more common profile of a college student who rapes would be a charismatic guy who is used to getting his way and has ample opportunities for consensual sex.

“I can’t educate a student who is predatory not to rape,” Sokolow points out. “What I can do is teach people around him to recognize the signs.”

This article originally appeared in the March 2015 issue of the ABA Journal with this headline: “A Crisis of Consent: Lawyers are dealing with changing rules on college sexual assault.”