Lawyer's life's mission is to reduce racial conflict with cops 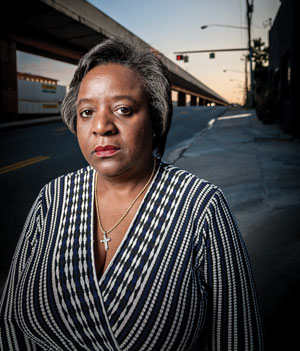 Former criminal defense attorney Robbin Shipp would describe these deadly dealings with law enforcement as “justice while black.” It’s also the title of her recent book, which is part wake-up call and part primer on what to do—and what not to do—when involved with police and the judicial system.

After nearly two decades of practice, Atlanta lawyer Shipp is now making it her life’s mission to help young minority men avoid being ensnared in the legal system. She’s also doling out advice that might save their lives.

“To me, it’s an opportunity—not just for the victims of police excess but for law enforcement officers themselves to come to grips with some of these inherent biases,” Shipp says. “We all carry [bias] as human beings. It’s just in moments of stress where it’s repeatedly becoming something that has to be addressed.”

Shipp addresses all sorts of tough truths in her book, which she says is “entirely preoccupied with the incredibly hostile and sometimes deadly relationship between the African-American community and law enforcement in America.” After the recent spate of killings, Shipp says, the book’s cautionary messages are as important as ever.

“For years there was always someone who would say, ‘This police officer just harassed us,’ ” Shipp says. “It’s the advent of the availability of videotaping that’s going on that has made it a lot more credible.”

Shipp co-wrote Justice While Black with Nick Chiles, a Pulitzer Prize-winning reporter who also lives in Atlanta. The Trayvon Martin verdict in 2013 spurred them to finish the book, which they’d begun two years earlier.

Shipp pulls no punches in the book, with chapters including “Officer Friendly Isn’t Your Friend,” “The Trap of the Plea Bargain” and “The Prison-Industrial Complex.” She offers a wide range of tips to criminal defendants, from getting a haircut and looking presentable at trial to how to choose a lawyer.

In the chapter “Silence Is Golden,” Shipp gives valuable advice on what to do if stopped while driving or while walking. Although the stop may be pretextual, or a clear case of racial profiling, Shipp warns readers to stay calm and resist the urge to become confrontational.

She says most people don’t understand their constitutional right against self-incrimination, and the biggest mistake by far is talking too much after being stopped and questioned. In an effort to say the right thing to a police officer, she says, defendants have talked themselves into criminal charges rather than out of them.

“It’s not just African-Americans or Hispanics,” Shipp says. “It’s poor white people and those who are disenfranchised. They don’t exercise their constitutional rights.”

Criminal defense work has always been Shipp’s passion. After switching careers and graduating from law school in 1996, she worked in criminal defense, had a stint as a prosecutor and was in-house counsel for a public health system. But she always returned to defense work.

“I was one of those people who always tried to help strays and had that compassion,” Shipp says. “My parents always instilled in me and my siblings that we had this obligation to give back, and that was my way of giving back.”

Shipp also served 1½ terms as a Georgia state legislator and was the 2014 Democratic nominee for state labor commissioner. But she currently has no interest in politics because, she says, “I’ve got another book to write.” The next one is about disparities in the public education system and why it’s failing our children.

Shipp acknowledges that Justice While Black isn’t a magic spell that will solve ongoing issues of police bias and brutality, justice disparities, or the mass incarceration of minorities. But she hopes her lessons and advice offer some sense of empowerment and help minimize the difficulties and distress at each step of the process.

Based on the interest they’ve received, Shipp and Chiles are planning to create a study guide for the book for use in schools and churches, so its message can reach Shipp’s primary target—young black men.

Shipp retired from criminal practice in February 2014. And despite the injustice she witnessed and battled against as a defense attorney, Shipp remains an optimist as well as a fighter.

“Whatever your faith is, you have to maintain that faith,” Shipp says. “You can find yourself in the criminal justice system with insurmountable odds. Once in a while, you see a miracle.”

This article originally appeared in the October 2015 issue of the ABA Journal with this headline: “In Black and White: Lawyer’s cause: reducing racial conflict with cops.”

• If the officer asks where you’re coming from, politely ask why you were stopped.

• Always have your identification handy.

• Answer the officer’s questions as succinctly as possible without embellishment.

• If the officer asks for permission to search your car, politely refuse.

• If the officer tells you to get out of the car, do as he says. And if he puts you up against the car, stay there.

• No matter what, never run from the police.

• Police have the right to stop you and ask your name, so politely tell them your name.

• Be as polite and courteous as possible.